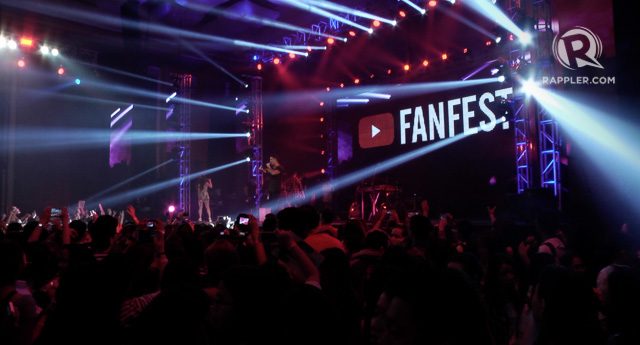 MANILA, Philippines – For the Pinoy fans who waited for hours to meet their favorite YouTube stars in the flesh, it was a night of epic proportions. Both local and international YouTubers banded together Saturday night, June 26, to put on a great show for the crowd. (IN PHOTOS: YouTube stars in Manila, all set for Fan Fest)

Fans surged forward to the stage, eager for a closer look at their idols. The lineup, which included a number of comedians and vloggers, also ensured a varied set buoyed by musical numbers from YouTube heavyweights like Bethany Mota and Kurt Hugo Schneider. (WATCH: YouTube star Macy Kate on first PH trip, fans, new music) The event kicked off with a performance by Rappers Abra, Loonie, Ron Henley and the Lyrically Deranged Poets (LDP). They started with a game called ‘Mr’ & ‘Mr’ which they announced on their twitter accounts earlier, asking fans to throw them “Who would most likely” questions. They answered some of the question onstage.

Bogart the Explorer also came out to help teach them Filipino. He taught them how to say “Magandang araw po sa inyong lahat” (good day to you all), which drove the crowd wild.

Here’s a cute IG post from Bogart, who brought #Jaspoli letters from Pinoy fans who didn’t get to see them:

Personally handed #jaspoli fan letters from fans who didn't get to see their favorite youtubers! 🙂 #gooddeedforthedaydone

Kristine of Real Asian Beauty was up next, helping a fan with a makeover.

Next, Chicser, which had fans of all ages jumping and shouting for them: Lloyd Cadena went onstage for a “Stik-O challenge” for his fellow YouYube stars – who could stuff the most number of sticks in his mouth? Oliver won and received a crown made of Stik-O. Mich Liggayu came out next with an upbeat dance number. Jireh Lim sang his hit song “Magkabilang Mundo.” After that, he took a lucky fan onstage and serenaded her with “All Of Me.” Allstar Productions followed with their number. 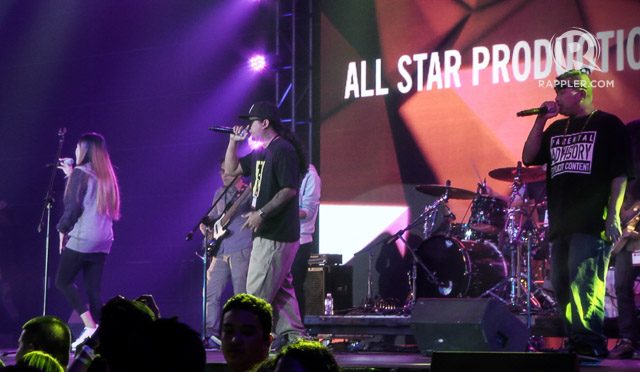 Bogart the Explorer came out next and surprised everyone with his mad drum skills (Marco Ho, who plays Bogart, is the drummer of Giniling Festival). He had a drum showdown with the host Dominic James Lau. This was followed by social media sweetheart Donnalyn Bartolome, who performed her rendition of “Super Bass.” Bethany Mota and Apl.de.ap were up next – Bethany told everyone how Apl toured her around Intramuros and said she loved halo-halo.

Apl.de.ap performed “Breathe” with former The Voice contestant Jessica Reynoso. After that, Loonie and Abra joined them and sang “Where is the love.” AJ Rafael performed next, getting the crowd swaying and waving with their phones. Nothing can explain the feeling when yall sing along to my songs! Thank you for being so amazing, Manila!!! & loud!!! #YTFF

Macy Kate rocked the stage next with upbeat, powerful vocals. Finally, Kurt Hugo Schneider then appeared, playing the keyboards while she sang. Here’s a special moment from Kurt:

And a selfie with AJ and Macy:

Shenanigans w @ajrafael & @macykatemusic 😛 and thanks for all the love on Flashlight guys!

Also, Bethany Mota sang in front of a live audience for the first time. Kurt played the piano while she sang “Flashlight” from Pitch Perfect 2. Finally, everyone came up to the stage for a social media tradition – a huge group selfie. Were you at Fan Fest? What was your favorite moment? Let us know in the comments below. – Rappler.com