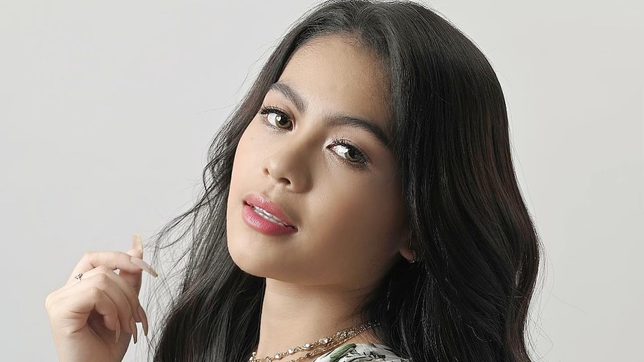 SINGER. Lyca Gairanod rose to fame after winning 'The Voice Kids Philippines' in 2014.

On Monday, August 16, Lyca Gairanod trended on social media, following the release of a video feature by broadcaster Karen Davila.

The viral clip, part of a longer interview with Lyca, was of Karen finding out that they shared the same birth day.

But it certainly isn’t the first time that the young singer captured the attention of the netizens.

Lyca is best known for winning the first season of ABS-CBN’s The Voice Kids Philippines in 2014.

A clip from her audition, wherein she effortlessly belted out the high notes of Aegis’ “Halik,” made her one of the early crowd favorites. The video, which now has 35 million views, remains to be one of the most viewed videos from that season.

Throughout the whole competition, Lyca continued to wow the coaches and viewers with her incredible voice and powerful performances. At nine, Lyca performed a medley of Aegis’ hits “Halik,” “Luha” and “Basang-Basa Sa Ulan” for the semi-finals – a performance many consider to be among her most memorable to date.

After winning in The Voice Kids and making her debut as a solo recording artist, Lyca appeared in a Maalaala Mo Kaya episode and starred in the 2014 television series Hawak Kamay. She also joined the 2017 edition of Your Face Sounds Familiar Kids.

In the Maalaala Mo Kaya feature, Lyca showed how her family struggled to make ends meet, before their life changed after she won the singing competition. A video clip of Lyca scavenging for trash while singing before she joined The Voice Kids had gone viral on social media.

Lyca has definitely come a long way from her The Voice Kids days. When she joined Viva Artists Agency in November 2020, Lyca said it’s been a conscious effort on her part to project a mature look.

“Lume-level up na ako ngayon. Kailangan may mapatunayan ako ngayon na nandito ako sa Viva. Gagawin ko ang lahat nang makakaya ko para mas maganda ang maging new journey ko,” she said. (I’m trying to level up now. I have to prove something now that I’m in Viva. I’ll do my best to make sure that my new journey will go well too.)

Aside from her singing career, Lyca also expressed her desire to improve her acting and dancing, and be an all-around performer just like her The Voice Kids coach Sarah Geronimo.

(This is Lyca now. I need to do what I have to to make my dreams come true. I want to be better at acting and singing. I want to enhance my career now that I’m in Viva… I never thought I’d be given this opportunity. I want to show my best. I’ll start again.)

Even as she’s gearing up for a new phase in her career, Lyca said she doesn’t regret spending time away from the limelight to focus on her studies.

(I went back to studying after the contest. I decided to return to school. We’ll never know what will happen to you in showbiz and your career. It’s better that I get to study… That was my priority.)

Lyca was only in third grade when she won The Voice Kids in 2014. Now, she is in Grade 9. In an April 2019 post, Lyca also announced that she had her moving up ceremony from elementary.

While we don’t see Lyca on TV as often, fans can subscribe to her YouTube channel where she posts vlogs, song covers, and other life updates. To date, the channel has amassed over one-and-a-half million subscribers.

In one of her vlogs, Lyca turned emotional as she took fans on a tour of her old home in Tanza, Cavite.

(I still miss this house. I have had so many experiences here and I have gone through a lot in this house. You saw my story. This is where I grew up and I can never forget this place where I came from.)

She added that while she’s grateful to live a more comfortable life, she’ll always treasure their old home. “Ayokong mawala siya kasi sobrang mahal na mahal ko ‘tong bahay na ‘to and hindi ko siya kayang pabayaan.” (I can’t let go of this because I love this house so much.)

(I will do everything for my family. I really want to do my best to help them. It’s so fulfilling.) – Rappler.com