LOVE IS IN THE AIR. Celebrity couple Vice Ganda and Ion Perez opened up about their relationship.

MANILA, Philippines – Following the announcement of their wedding commitment ceremony in Las Vegas, Vice Ganda and Ion Perez opened up about their engagement and the recent milestone in their lives.

The celebrity couple was welcomed and congratulated by their fellow It’s Showtime hosts during the show’s Wednesday, February 16 episode. The two were asked to share more details about the intimate ceremony that happened in October 2021, and the comedian admitted that it wasn’t something they had originally planned. 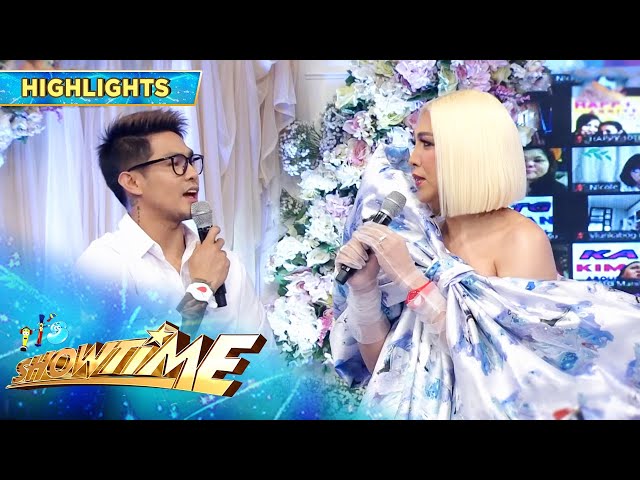 “Nag-concert ako sa America tapos nagkataon na anniversary din namin. Tapos nagpunta kami ng Vegas.… Sobrang spontaneous noon. Buti nga meron pang slot doon sa pinuntahan naming chapel,” he said. (I had a concert in the US back then, and coincidentally, it was also our anniversary. Then we went to Las Vegas.… And it was just very spontaneous. It was a good thing that the chapel we went to still had slots for us.)

(Ion proposed to me last February 21, 2020, even before the pandemic. When he proposed, I got scared. I asked my friends to delete all the videos [of the proposal], so that it wouldn’t be shared to the public…. I kept it a secret from everyone.)

(I was scared that other people would disrespect and make fun of this beautiful thing that we had. I told him that it was enough if we kept it between us. If others found out about it, they’d mock it and just ridicule the two of us. I didn’t want that. It was painful for me. That’s why I’d asked him to keep it private.)

(Even if the laws in the Philippines won’t acknowledge our union, I don’t care. I just want to celebrate our love for each other in front of those who love us, and our fans. That’s why I want [the wedding] to be grand.)

But given the pandemic situation, the comedian said he’s forced to let go of his dream grand wedding for the meantime. He recalled that when they spontaneously decided to hold a simpler and smaller ceremony in Las Vegas, he had no complaints.

(I dismissed the idea of the dream wedding that I’d wanted – the extravagant rings and outfits. I didn’t care about that. At that point, even if we were alone, and our friends weren’t there, what mattered the most was that I was there and he was there. And we could say what we’d always wanted to say…. We feel so happy because we went through something beautiful.)

In the end, Vice Ganda said that he and Ion are both overwhelmed by the love and support that they have been receiving. “Sobrang bongga lang na parang it was celebrated by everybody.… I was just so happy na ang daming nagmamahal sa aming dalawa and ang dami palang happy para sa amin,” he said.

(It feels good that we were being celebrated by everybody.… I was just so happy that there were a lot of supporters who loved us and were happy for the both of us.)

Vice Ganda and Ion first confirmed their relationship in 2019. – Rappler.com