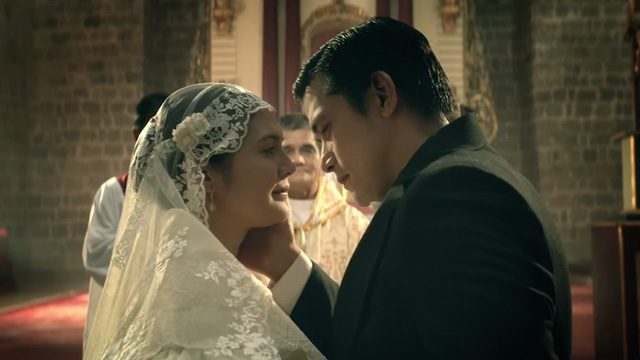 The difficulty with history is that it is, ultimately, all very subjective. Despite the mountains of historical documentation, the past is, inevitably, shaped by the necessary but fallible act of storytelling. The facts, though initially culled from truth, are eventually blemished by human subjectivity. And the result is molded into one account of history, as opposed to the account of history. But Bonifacio: Ang Unang Pangulo challenges the textbook story of the Supremo with the presupposition that the first president of the Philippines was not Emilio Aguinaldo. Instead, in the film, it is, at heart, Andres Bonifacio.  The film follows the life of the revolutionary from Tondo but thankfully the skips his childhood years by going straight to the founding of the Katipunan.

The film itself is enframed by a superfluous story set in modern times. A group of students led by Joaquin (Daniel Padilla) and Andrea (Jasmine Curtis) are hard at work on a school project, and during a visit to a local museum, they learn the supposed truth about the Supremo.

But instead of seizing the opportunity to present audiences with something new, we are provided, instead, with a story we’ve heard before that suffers from the very same problems it is trying to resolve.

Bonifacio works hard to clear the Supremo’s name, but it does so by painting a villanous picture of Aguinaldo. Distant and mostly silent, Aguinaldo is relagated to little more than a blip in the story of Bonifacio. It is Aguinaldo’s decision to permanently remove Bonifacio from the  Philippine revolution that becomes the penultimate turning point of the film.

In effect, Aguinaldo becomes Bonifacio’s own deus ex machina – the miracle man that pushes the story, almost magically, towards its inevitable conclusion: the Supremo’s death. But without any real dramatic context to appreciate the rivalry between Aguinaldo and Bonifacio, the film becomes its own version of propaganda. Audiences are force fed lessons in history through a checklist of events and a long list of pedagogic speeches, all punchlined with the resounding  mantra that “Bonifacio was not a traitor.”

But regardless of its truth, this revelation is handled with such bludgeoning and suffocating force that it is more mandate than argument.

Bonifacio posits a new take on an old hero, but even in that regard, the film retreads familiar ground. Richard Somes’ Supremo and Raymond Red’s Bayani all depicted Bonifacio as more than who he was made out to be. Mario O’ Hara’s Paglilitis ni Andres Bonifacio even focused on the Supremo’s actual trial. But while far from perfect, these films were all previous examinations of Andres Bonifacio. And instead of building on that, one can’t help but feel a certain sense of redundancy with Bonifacio. But Bonifacio simply isn’t bold enough to challenge its own material. Mike De Leon’s Bayaning Third World is still considered one of the most important Filipino films of the last two decades, exploring Jose Rizal by both praising and dismantling the esteemed national hero.

And therein lies the real problem of Bonifacio. Like most historical epics, Bonifacio puts overwhelming importance on dates and events. But the real meat of history is in its people. Bonifacio is depicted as no less than the patron saint of patriotism: flawless, righteous, and upstanding. But while these are all admirable traits for any individual, none of these qualities help to make him more human.

In Bonifacio, characters are little more than pawns in a textbook reenactment of history. But it is their flaws, their fights and their failures that should endear them to us.

And despite Bonifacio’s best efforts to do justice to the Supremo, the film’s refusal to paint any of its characters in a negative light ultimately robs audiences of the means to connect to it. Bonifacio may supply us with history. But in truth, what the film needs is a more than a little humanity. – Rappler.com