Throughout Kenneth Dagatan’s horror film set during World War II in the Philippines, we never see any of the Japanese or American forces battling for control of the country. Instead, Dagatan points his camera at a family in a dismal state – in particular, their undiminished reliance on faith.

What follows is a deconstruction of that faith, with shades of grey gradually spreading across the remaining vestiges of morality in wartime. The inevitability of the Japanese forces spells looming death and occupation, but even before they arrive, the harbinger of the family’s destruction comes early, in the form of hope.

The hope that the country will be saved from the Japanese, the Americans, and all those who would invade it becomes a double-edged sword in In My Mother’s Skin. As the young girl, Tala (Felicity Kyle Napuli), meets an Engkanto (or Filipino fairy), she is immediately beguiled by offers of salvation and good fortune, a means to escape from the terrors of man and to maintain the purity of her soul.

But this isn’t a happy fairy tale, and the film’s many villains know that. So they use faith as manipulation, hope as an illusion, and innocence as subservience. This makes the horror of Dagatan’s film layered and nuanced to historical context. It’s a haunting, chilling, and thought-provoking kind of horror that burns itself in your mind.

Like in his first full-length film, Ma, Dagatan once again extracts horror from magical realism, through the lens of children who unknowingly make deals with the devil. Here, instead of an ominous cave, the bearer of Faustian bargains takes the shape of a fairy (Jasmine Curtis-Smith) dressed as a Santo Niño figure appearing in and out of an overgrown chapel.

The costume design and practical effects are unsettling, crossing the line between tangible and intangible. Curtis-Smith’s fairy is adorned with intricate handmade filigree, tassels, and beads, which are made even more uncanny by the cicada wings encircling the crown and the subtle malevolent expressions from the actress. Dagatan, now clearly adept at grisly effects (see his mastery at this craft in his first horror short Sanctissima), draws a physically exertive performance from Beauty Gonzales.

The house — the same one used in Oro Plata Mata, and where most of the horror of In My Mother’s Skin takes place — heightens the film’s atmosphere of grief and dread. Instead of overcrowded halls and lavish parties, the house is emptied of its opulence. In it are Tala (Felicity Kyle Napuli), her brother Bayani (James Mavie Estrella), their family servant Amor (Angeli Bayani), and Gonzales as their mother, Ligaya.

Romualdo (Arnold Reyes), the family patriarch, departs to negotiate with the Japanese and inadvertently kickstarts the incursion of insidious actors into his home. Gold, likely referencing the myth of the Yamashita treasure, is hidden inside the house, and Antonio (Ronnie Lazaro) takes this as an opportunity to try and steal it. Meanwhile, Tala’s deal with the fairy causes her mother to act strangely, leading to a third-act climax that is utterly stomach-turning.

While it seems like a straightforward story at first glance, delving deeper into its background reveals a rich and complex narrative. In My Mother’s Skin truly comes to life when viewed through the lens of the underlying conflict it portrays: the exploitation of colonial forces and their lasting ramifications on the purity of the Filipino soul.

The trio of Japanese, American, and Spanish imperial powers have all attempted to colonize the Philippines in the past and offered their own versions of salvation. The Santo Niño-like fairy evokes the influence of Catholicism and the hypocrisy of Spanish friars hiding under the guise of benevolence. It’s no mistake that Dagatan shoots many scenes of the family kneeling in front of a religious altar; it’s an act of worship but also an act of submission, an invisible presence that strangles them, much like the unseen soldiers heard only in faint gunshots.

Importantly, we observe how this affects young children, who lose their innocence and must deal with unspeakable anguish. The performance of Napuli in the lead role is phenomenal; she uses her theater experience to convey the emotional weight and raw vulnerability of a child forced to confront harsh realities and deadly bargains. Her co-lead, Beauty Gonzales, is remarkable in equal measure, her body convulsing with each contraction and retching streams of blood from her mouth in a convincing manner. 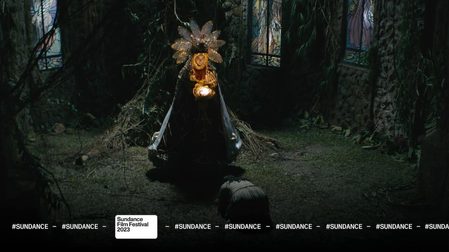 If anything, the film’s blemishes lie in how quickly the boiling point arrives, whereas longer films like Oro Plata Mata and Tatlong Taong Walang Diyos savor their bounty of character interactions, examining clashing moral positions in the war. It also takes a page from Pan’s Labyrinth, specifically in its fairy tale approach and the inclusion of mythological creatures. But in that film, escapism plays a key role in the lead’s fantastical world, but here, Tala’s escapism as a means to cope is a bit underplayed, focusing more on the desperation provoked by war as a motivating factor for trusting the fairy.

But with beautiful visual compositions, remarkable sound design, and some truly affecting performances, In My Mother’s Skin is psychologically and intellectually stimulating, the absolute best in the horror market. It serves as an exclamation point for what is shaping up to be an exciting and galvanizing genre career for Kenneth Dagatan. And if his past films full of flesh-eating, vomit-spewing, self-cannibalizing monsters are any indication, then everyone should take notice. – Rappler.com

In My Mother’s Skin will be streaming on Amazon Prime Video later this year.