LOS ANGELES, USA – As a Filipino in Hollywood, I couldn’t be more thrilled to experience this moment – the popular Universal Pictures opening fanfare introducing a film about a Filipino American family

Last Sunday, July 24, was historic, if you ask me. The first ever major Hollywood studio revolving around a Pinoy family, Easter Sunday, was screened for the first time before a theater full of cheering Filipinos and Asians. The venue was apt – in one of the movie houses of the famed Tinseltown landmark, Grauman’s Chinese Theatre.

A virtual who’s who, especially in Filipino and Asian entertainment, trooped to Theater 6 for the VIP screening presented by Gold House, a nonprofit collective of Asian creative talents and leaders, with Coalition of Asian Pacifics in Entertainment (CAPE), DreamWorks Pictures, Rideback, and Universal Pictures.

In a town where screenings happen every day, this one felt different. For once, there was an air of excitement and giddy anticipation. There has never been a major studio film solely about Fil-Ams, even though we are among the largest immigrant groups in the United States. Yet, we are almost invisible in cinema and television.

A Filipino character in a film or TV show is a rare bird and oftentimes, we have to guess if this peripheral part is Pinoy. The biggest oversight happens in hospital TV dramas. I’ve written about this again and again – when you walk into a healthcare facility in America, chances are, you will encounter a Filipino nurse, doctor, lab or X-ray technician, or aide.

And yet, many hospital dramas do not have a single Filipino character.

It took the talent and popularity of Jo Koy and the clout of Steven Spielberg to finally come up with a big studio film about us – our solicitous mom, that cousin you don’t know whether to love or hate, our bickering titas, our fondness for karaoke and the scores we get (“89 only?”), packing balikbayan boxes, preparing and serving lots of food, and more. 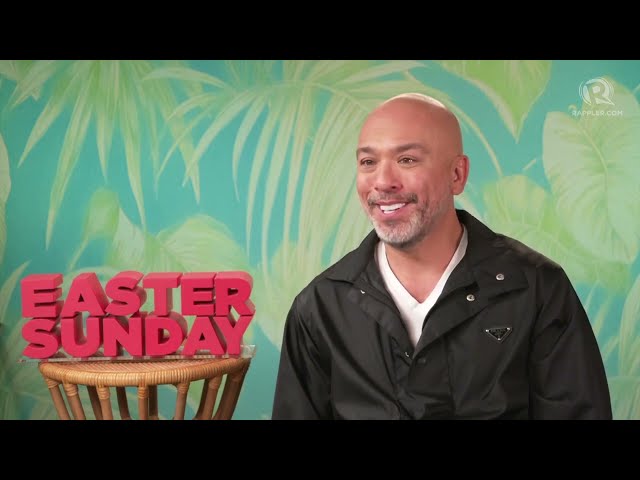 The oft-told story, like the one our kuyas and lolas keep forgetting that they have already told us a thousand times, but is worth repeating, is that Steven saw Jo Koy in one of his stand-up specials, Comin’ in Hot. Impressed, the Hollywood titan reached out to the comedian to do a project.

The result is Easter Sunday, a nearly two-hour comedic romp directed by Jay Chandrasekhar and written by Ken Cheng and Kate Angelo. Jo Koy plays Joe Valencia, a struggling LA comedian trying to juggle his career, family (ex-wife and son), and the Filipino side of his family in Northern California.

On a weekend when Joe is trying to land a role, his mom insists that “Josep” come to NorCal to spend Easter Sunday with the family.

And of course, what a riotous, gossiping, drinking, eating, fighting, laughing, and ultimately loving Filipino clan this is! Jo Koy and Jay assembled some of the best Fil-Am actors.

Lydia Gaston plays Joe’s mom, Susan. I think Josie Harrison, Jo Koy’s colorful mom in real life, around whom he concocts his funniest stand-up anecdotes, would approve. Lydia is in a running feud with her sister, the equally posturiosa (as most Pinay women are) Tita Theresa (Tia Carrere).

There are other titas and titos, of course, because what’s a Pinoy gathering without all those clamorous uncles and aunts who fuss over everything and everybody? Get ready to “mano po” to Tita Yvonne (Melody Butiu), Tito Arthur (Rodney To), Tito Manny (Joey Guila), Tito Eugene (Eugene Cordero), and Tita Regina (Elena Juatco).

Even Lou Diamond Phillips shows up as himself. Eva Noblezada (Ruth) and Brandon Wardell (as Junior, Joe’s son) play the Fil-Am xennials, bemused by their Pinoy elders.

Into this often raucous yet endearing mix also come characters of various other nationalities, portrayed by Tiffany Haddish, director Jay Chandrasekhar (who plays a Hollywood agent), Asif Ali, Jimmy O. Yang, and Carly Pope, among others.

While Easter Sunday is about a Fil-Am family, it’s a comedy, so it’s a movie that can be enjoyed by everyone. Families are universal – moms, uncles and aunts, sons and their girlfriends, are relatable in any race.

As if the screening was not momentous enough, an alternately thought-provoking and laugh-out-loud funny Q and A followed, excellently moderated by Jose Antonio Vargas, Pulitzer Prize-winning journalist, author, and founder of Define American.

Jose, who described this moment, all the way to Easter Sunday’s release on August 5, on his Instagram page as “living history,” drew inspiring, sometimes sobering comments and answers from Jo Koy, Tia, Lou, Jay, and Jimmy.

But first, there was serendipity. As the closing credits rolled, and the theater lights went on, Jo Koy acknowledged the presence in the audience of Fil-Am actor Dante Basco.

Talk about the dearth of Filipino actors in big studio films – Jo Koy recounted that when he watched Steven Spielberg’s Hook for the first time, he kept his eyes glued on the screen as the end credits rolled to see the name of who played Rufio. When he saw the name Dante Basco, he was so thrilled that the Filipino-looking boy was indeed Filipino.

And now, whose production company is one of the entities that helped make the first big studio film about Filipino Americans? Steven Spielberg and his Amblin Partners.

Tia expressed a sigh of relief that with a film like Easter Sunday and with Hollywood open to more diversity and representation, she can finally be who she is – Filipino.

In the ’80s and ’90s, I encountered Fil-Am actors who passed themselves off as Chinese, Spanish, Japanese, or even Polynesian – anything but Filipino. I do believe that MTV, with its videos that exposed whole generations to various races and ethnicities, was one of the catalysts that inspired youths to be proud of their heritage.

These days, we have artists from Darren Criss to H.E.R. who openly talk about their Pinoy heritage, including Nope breakout star Brandon Perea who proudly says, without batting an eyelash or even a second of hesitance, that he is “half-Filipino and half-Puerto Rican.”

Lou revealed that in his case, it was the reverse. Some Hollywood executives did not believe he was Filipino.

Tia stressed what I have also expressed – for Filipinos to continue having a presence in Hollywood, it’s important to have Pinoys in key positions who will write, hire, and greenlight our stories. As I like to say ad nauseam, who will write about Filipinos but us?

Going home, even as I was driving right in the heart of Hollywood, I had never felt more Filipino. – Rappler.com