Oscars 2022: 5 experts on the wins, the emotions, the music – and the bold frocks on the runway Cast of Encanto pose on the red carpet during the Oscars arrivals at the 94th Academy Awards in Hollywood, Los Angeles, California, U.S., March 27, 2022.

It’s rare that an appealingly minor film wins the best picture Oscar – and a remake of a French film at that – but this year, CODA has done it.

Is it the best film from 2021? Absolutely not! But with best picture decided by preferential ballot (unlike the other awards), it makes sense that a sweet and inoffensive movie could sneak through.

One can imagine that CODA would have appeared at the second, third, and fourth spot for numerous critics, unlike favorite The Power of the Dog which, as a divisive film, would have ranked last for many (as it was for this critic).

CODA is well made and very easy to watch, with its narrative following teenager Ruby (Emilia Jones) as she tries to develop her skills as a singer while living with Deaf parents and a Deaf older brother, helping run the family fishing business, and attending high school in their fishing community of Gloucester, Massachusetts. In some respects, it’s nice that a low budget film like CODA won, though its upbeat, formulaic quality as a coming of age film will not appeal to people who like strange, challenging and intense cinema – in other words, works of art.

CODA is comfort cinema, firmly situated in the entertainment camp. But it’s not bad, and in this day and age, that’s pretty good for a best picture winner.

A speech acknowledging the personal heroes

What people take away from Oscars ceremonies over the last decade is more and more the prepared content, less and less the acceptance speeches.

The award winners have only 45 seconds to speak. They get thrown into a career-defining moment more or less by surprise.

By contrast, the choreographed segments can be arranged so that audiences notice and recall them. This year we had Beyoncé’s all-lime curtain raiser, the minute of silence for #standwithukraine, and the hosts’ rapid-fire roasting of celebrities.

There is a broader story about the history of speeches here: they are steadily losing their power as the medium that speaks for a moment.

The standout exception remains moments where a speech takes us outside the expected norm. Will Smith’s angry, ugly confrontation with Chris Rock might become the most talked-about moment of the night, but Troy Kotsur’s acceptance speech for best supporting actor for CODA, delivered in American Sign Language – with his interpreter choking back tears as it unfolded – should be a reference point for many in years to come.

Kotsur acknowledged the heroes of signing in his own life, both at home and at work. His speech gave a very public voice to people who communicate visually: to the Deaf community, to the children of Deaf adults who gave his film its name, and to a stage and screen community that has nurtured talent like his for much longer than most people have recognized.

Will Smith smacks Chris Rock on stage at Oscars 2022, then apologizes upon winning Oscar 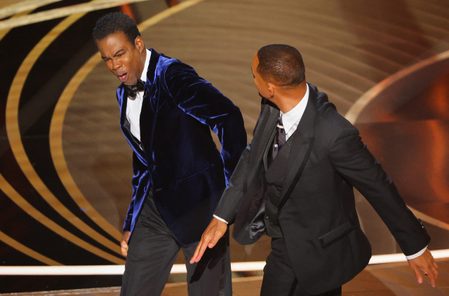 The Power of the Dog was nominated for an extraordinary 12 Academy Awards this year, with its director Jane Campion making history as the first woman to be nominated for best director more than once.

Despite collecting the most nominations of all the films this year, The Power of the Dog only came away with one win – Campion’s long overdue directing nod.

Her acceptance speech was notably prewritten, perhaps in an effort to avoid a recreation of her blunder at the Critics’ Choice Awards earlier this month in which she seemed to compare her struggles in male-dominated Hollywood to the challenges faced by Venus and Serena Williams as black female tennis players.

Campion’s award was The Power of the Dog’s sole win. In stacked technical categories like sound, cinematography and production design, it was outperformed by box office giant Dune.

Given The Power of the Dog’s divisive approach to storytelling (host Wanda Sykes quipped she had watched it three times and was only halfway through), it is perhaps unsurprising that The Power of the Dog was not as well received as its many nominations initially suggested. 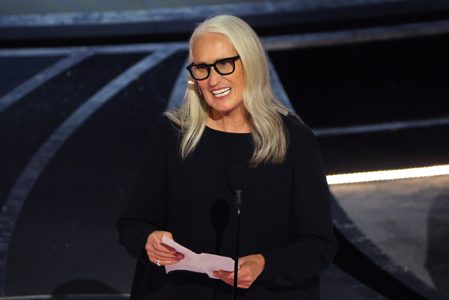 Very few wins for the musicals

2021 saw the release of an unusually large number of musicals, some of which were nominated for Oscars. With the most nominations (and the biggest budget) was West Side Story, and we also saw Tick… Tick… Boom! and Encanto on the podium.

CODA, while not a musical per se, puts music at the center of its story, and Summer of Soul (winner of best documentary) brings an important music historical moment back to our knowledge. In the Heights unfortunately missed out on any nominations even though it deserved some in the technical categories. Dear Evan Hansen seems already to have been justly forgotten.

The one original musical (as opposed to stage-to-screen adaptations) among the nominations, Encanto (winner of best animated film), had two of its songs performed in the ceremony: the nominated “Dos Oruguitas” and the year’s biggest hit “We Don’t Talk About Bruno.” The latter should have provided some well needed relief from music that alternated between dull (the incidental music) and sombre (the other nominated songs), but the performance was let down by a confusing staging and sound mix and unnecessarily rewritten lyrics.

The box office and award disappointment of most of these musicals puts the future of the genre at risk. If a film as good as West Side Story fails to make back even half its budget, whether producers will continue to risk large-scale musicals is brought into question. Will Smith is a likeable enough film star, and he’s led numerous blockbusters throughout his career, effectively anchoring superb genre films like Independence Day, Enemy of the State, and Bad Boys.

The problem is, like many charismatic entertainers, this year’s winner for best performance by an actor is not a very good actor. He brings absolutely no nuance or originality to any of his “serious” roles. Everything he does is in his face – he tries to convince us with his eyes, with twitches of his cheeks, with stern or soft intonations of the voice, running through the gamut of expected mannerisms.

His Oscar-winning performance in King Richard is no exception. He offers a run-of-the-mill portrayal as the earnest, slightly cracked but sincere hustling father of the Williams sisters. He expresses emotion and intensity where we would expect it: he is sufficiently convincing in an obvious part in a thoroughly banal biopic.

We should not be surprised by any of this. Since excellent actor Denzel Washington won the best actor award for his role as Alonzo in Training Day (an excellent film, with a solid but very routine characterization from Washington as the corrupt cop), no one has taken the award very seriously. 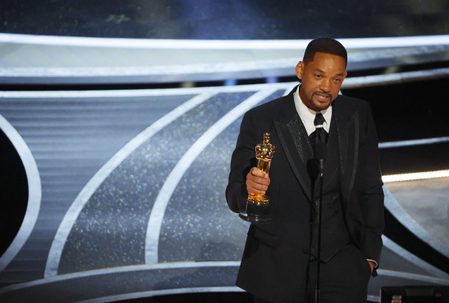 …but a wonderful choice for actress

Unlike Smith, winner of the best performance by an actress award Jessica Chastain has acting chops, and her talent is on display in the caricaturish (but very funny) The Eyes of Tammy Faye.

Her embodiment as the real-life televangelist won’t be to everyone’s taste – and neither will the film, as a biopic its scope is already limited by the contours of reality – but Chastain is thoroughly convincing as the deluded but sincere figure who, notably, refuses to ostracise the gay community despite pressure to do so, interviewing pastor Steve Pieters, an AIDS patient, during the height of the AIDS epidemic.

Graduating from Juilliard in 2003, Chastain has been impressive in numerous films, from her improvised performance in Terrence Malick’s The Tree of Life to her intense characterization as Jo in John Michael McDonagh’s The Forgiven. Chastain is a solid actress whose best work, one hopes, is still to come.

Where was the music?

As a musical event, the ceremony itself left much to be desired. The producers made a play for eclecticism by having three different musical sets: the first hour featured DJ D-Nice; a small band led by music director Adam Blackstone played in the second hour; a pit orchestra played for the rest.

We are used to hearing snippets of the film scores play while winners go to the stage, but this was mostly replaced with innocuous background music (even from the orchestra). We only heard the scores during clips of the nominated films and – perversely – the very shortest clips of all were in the nomination announcements for best original score!

The chance to introduce millions of viewers to these composers’ work was limited to about two chords per score.

Hans Zimmer’s win for best original score for Dune further cements his place in the film scoring firmament. As expected, Billie Eilish and her brother Finneas won the award for best original song for “No Time to Die,” which also has a Zimmer connection (he wrote that film’s score). Their performance of the song in the ceremony was one of its few musical highlights, the composers presenting an intensely focused rendition of their work.

Just like a good film score, the musical program of an awards ceremony should carefully take the audience on a cohesive aural journey. I hope next year’s producers make better musical decisions.

From a sea of pastels to bold sartorial choices

Seeing the first arrivals, it seemed that the trend for pastels might rule the fashion of the night.

But, as the event progressed the colors became brighter, the silhouettes bolder.

Ariana DeBose was glorious in custom tomato-red Valentino crop top and trousers, a long taffeta cape trailing behind her. She and the iconic Rita Moreno, in Carolina Herrera gown and black and white feather Adrienne Landau hat, made a delightfully striking pair.

Making a political statement in support of Ukraine, Youn Yuh-Jung presented the dapper Troy Kotsur with his award whilst wearing a #withrefugees blue ribbon pinned to her Chanel dress. (Multiple others wore the ribbon or Ukrainian flag pins or pocket squares).

My highlights: Uma Thurman in a chic Bottega Veneta take on her iconic Pulp Fiction dance scene look. Maggie Gyllenhaal in structured Schiaparelli. And the ever-amazing Lupita Nyong’o looking like an Oscar in gold Prada (made perfect with matching gold spectacles) presenting the award to costume designer Jenny Beavan for her incredible work on Cruella.

Ari Mattes is a Lecturer in Communications and Media, University of Notre Dame Australia.

Gregory Camp is a Senior Lecturer, University of Auckland.

Harriette Richards is a Research Associate, Cultural Studies, The University of Melbourne.

Tom Clark is Chair of Academic Board, Victoria University.