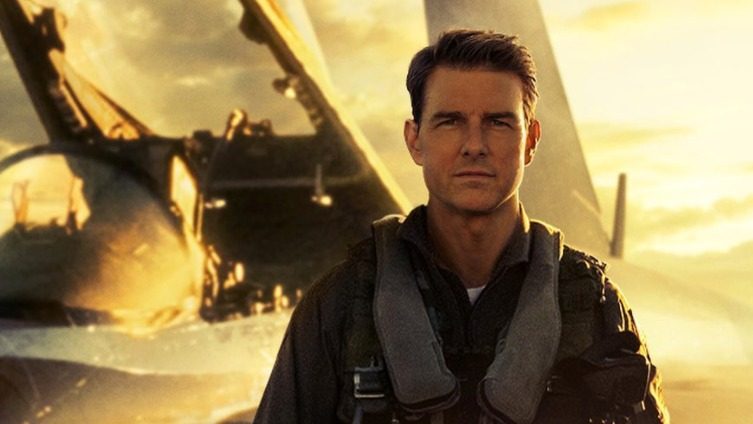 Facebook Twitter Copy URL
Copied
'Maverick is Tom Cruise, the singular ageing movie star-hero hybrid. The film is a celebration of film itself. This is a proper blockbuster of old that can bring in the punters at cinemas.'

Legacy films are more than a sequel: they hand franchises down to a new generation of viewers, passing a cultural baton.

At the opening night screening I attended of Top Gun: Maverick, when the lights went down, someone loudly whispered, “Let’s go!” – a perfect evocation of such films’ sense of expectation and repetition.

Top Gun (1986), an arena rock concert of a film, paints hot-shot US Navy aviator Lt Pete “Maverick” Mitchell (Tom Cruise) as a charismatic all-American rebel. He doesn’t play by the rules, but knows how to be loyal when it counts.

Accompanied by a hyper-masculine soundtrack of screaming electric guitars and thudding synths, the reckless Maverick must negotiate his grief at Goose’s accidental death, his rivalry with Lt. Tom “Iceman” Kazansky (Val Kilmer), and the long shadow of his father’s reputation – before beating out enemy fighters and getting the girl.

In this new film, Maverick, now a test pilot, is reluctantly recalled to TOPGUN to train top graduates in a seemingly impossible mission of global importance – or be grounded forever. A film obsessed with itself

Like recent legacy hits such as the third Star Wars trilogy, Blade Runner 2049, and The Matrix: Resurrections, Top Gun: Maverick is a film obsessed with its earlier self.

It’s still a competition film with exhilarating action and flight sequences. It matches many of the original film’s narrative and emotional beats. It restages key moments and re-imagines others.

The film revisits old characters, reworks the original score, and incorporates earlier footage into flashbacks. It surrounds the characters with photographs of their younger selves. It even rolls its end credits over the same burnt orange skies.

Legacy films always have an implicit relationship with the older films’ ideas and politics, and the conditions of their creation.

Top Gun heralded a new, powerful relationship between Hollywood and the US Department of Defense that persists today. Producers Jerry Bruckheimer and Don Simpson had pitched a film to the Pentagon based on journalist Ehud Yonay’s 1983 article “Top Guns” well before any screenplay was written.

The US Navy was actively seeking a beneficial project to support. The Navy offered significant practical support and had input into the script, and the film was regarded as a seductive recruitment tool.

The TOPGUN program was established by the US Navy in 1969 to train elite pilots in response to aerial combat failures during the Vietnam War. The 1986 film helped rehabilitate the US military’s image in popular culture after Vietnam.

The film expressed vibrantly the jingoistic patriotism of the Reagan era. The Americans are noble good guys who don’t shoot first. The “bogeys” are faceless antagonists, their red star insignia and Soviet MiGs marking them part of a Communist threat.

The geopolitics of Top Gun: Maverick are vague, even chaste. The baddies are an unnamed power that has developed a secret uranium enrichment facility deep within a mountainous region. They are a threat to NATO allies, have superior technology, and anonymous soldiers – and that’s it.

This doesn’t affect the action, but the mission is backdrop to a small-scale, human story about bridging intergenerational divides, coming to terms with the past, and re-establishing familial bonds.

It is inoffensive enough to cater to Hollywood’s global audience. Beyond mention of contemporary American pilots spending more time dropping bombs from on high than engaging in aerobatic dogfights, and passing references to Iraq and Bosnia, this is a military film largely devoid of war.

It has a pervasive sense of naiveté. Tom Cruise in his white t-shirt still looks like a present-day James Dean. It is nostalgic more for images and stories of loyalty and heroism than the murky conditions of conflict. What is the conflict?

The thrumming, sexualized, objectophilic tension of the first film centered on the sweaty, muscular white bodies of its cast and similarly muscular images of military technology.

The disciplined, diverse cast of young fighter pilots of Top Gun: Maverick are up against a more insidious foe: skilled human pilots are replaced by unmanned drones.

Maverick, we are told, is a fossil – the last of his kind. We hear time is the pilots’ greatest adversary; Maverick is about to be grounded for good; the future is coming and Maverick isn’t it. But Maverick’s heroism persists in his concern for people, their families, and their jobs.

We are repeatedly told superior technology is one thing, but it’s not the plane that’s important. It’s the (American) pilot and their instincts.

Maverick is Tom Cruise, the singular ageing movie star-hero hybrid. The film is a celebration of film itself. This is a proper blockbuster of old that can bring in the punters at cinemas.

In the film’s dynamic climax, Maverick seeks to demonstrate just how powerful the old gear, and the old ways, still are. It’s not subtle.

In Top Gun, the takeaway message was constant vigilance was a means of upholding American exceptionalism. In this film, we hear the end might be coming, but there is still much more in the tank.

That may well be the case for the traditional action blockbuster, which is one of the United States’ greatest global exports. But well after the end of the “American Century,” and at a time of significant domestic and global disruption, this might be a more nuanced and complicated statement than intended. – Rappler.com

Erin Harrington is a Senior Lecturer in English and Cultural Studies, University of Canterbury.