Music has a way of uniting people. And in a recent episode of So Jannelle TV – a weekly magazine show hosted and produced by Filipino-American media pioneer Jannelle So Perkins – we also found out that music has a way of helping people process complex emotions. Sometimes, those breakthroughs come just when people need someone to reach out to them with a helping hand.

That’s what happened to Shadouh Lopez and Zia Jones, a pair of Fil-Am members of ARMY, the fan base of K-pop superstars BTS. The two met at the final Las Vegas date of the K-pop sensation’s Permission to Dance tour last April and found that they both dealt with mental health struggles with the group’s help.

“It just felt so natural in a way like as if we had known each other for years. But we just met, so it was so amazing,” Jones shared with So-Perkins for the latter’s TV program, which airs US-wide on cable channels The Filipino Channel (TFC) and ANC, as well as on local Southern CA digital channel KNET 25.1. 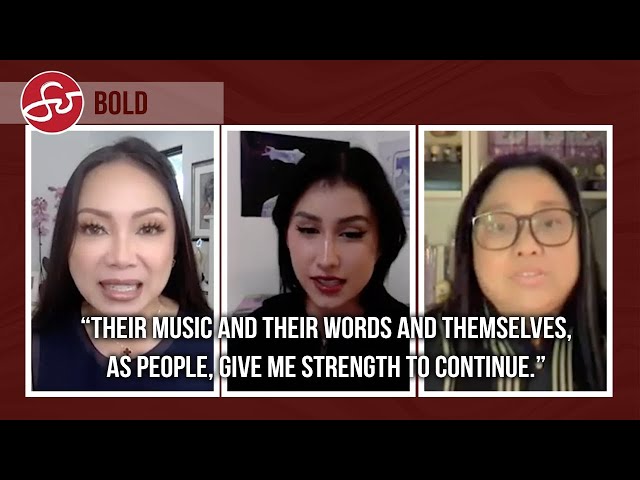 For Lopez, she believes she found the music of BTS right when she needed it the most. Her husband had died in 2019 of a rare form of cancer. She had been his primary caregiver during the final seven years of his life, and had to make the difficult decision to take him off a ventilator. The trauma haunted her to the point of having hallucinations, including one episode where she nearly got into a car accident after believing that she had seen her late husband.

She had undergone counseling and taken medication to help stabilize herself, but she said she found another unconventional form of therapy when she heard a BTS song for the first time in May 2020.

“I googled, and then the Pandora’s box of BTS opened, and I started finding them as a source of healing,” said Lopez.

Jones had her own struggles to overcome. She has battled anorexia, depression, and anxiety since age 12. There were times when she’d cry herself to sleep, afraid of having to confront the thought of eating the next day. Other times, she’d simply cry in the mirror and wonder if life was worth living.

She had contemplated suicide, but said the words of BTS member Jimin kept her from ending her life.

“He said, ‘If you’re ever going through a hard time, think of me. It’ll make you feel better,'” recalled Jones. “I held on to BTS’ words for years and years, and eventually they motivated me to want to get better and start recovery, and I’ve been in recovery for a year and a half.”

Jones said the process of recovery has been difficult, but she finds motivation in watching the band’s livestreams on the V Live app. She said she finds Jimin’s voice comforting and is able to eat a meal easier when she hears his voice.

Lopez also finds that listening to BTS’ music helps her deal with her battles.

“I find myself being able to go to sleep on my own just by listening to their music,” she said. “I still have my days. I miss my husband every day, it’s never gonna go away, but I go to a happy place. I go to my ‘Bangtan,’ and it is a good diversion for me.”

It isn’t uncommon for bands to have a connection with their fans, but Lopez and Jones are proof that music can uplift people from their darkest valleys. Jones believes she would have been dead had she not discovered their music, and Lopez believes she would be “very unhealthy” and would have never had the stability to start her own business.

“I want to thank them for holding my hand when I feel like drowning, while everything is alive around me,” said Lopez. – Jannelle So Productions | Rappler.com