Facebook Twitter Copy URL
Copied
For the participating acts, the event is a way for them to give back to fans and spotlight the growth of P-pop in recent years

MANILA, Philippines – Sixteen of the biggest and most promising acts in the P-pop music scene are coming together for the first-ever Pinoy Pop Convention (PPOPCON) happening on April 9 and 10.

Dubbed as the “first and largest event that celebrates Pinoy Pop music,” the 2022 PPOPCON assures attendees that it will be a milestone both fans and artists can experience together.

Andhie Salutin, project head, said during the press conference on Wednesday, March 30, that the 2022 PPOPCON “aims to build and unify the ever growing P-pop community.” “It is a celebration not just for the fans but for the richness of diversity of Pinoy pop culture,” she said.

The participating groups agree, saying that the 2022 PPOPCON is a platform for them to showcase the growth of P-pop. “We are so excited and happy na makasama namin ang aming ka-P-pop groups (that we’ll be with our fellow P-pop groups)…. So happy to say na dumadami na tayo (that we’re growing),” MNL48 said.

(We’re actually very proud because they have joined in this battle – a battle to prove to the world that Filipinos can also thrive internationally, and of course, by doing so, we can also share our culture to others.) 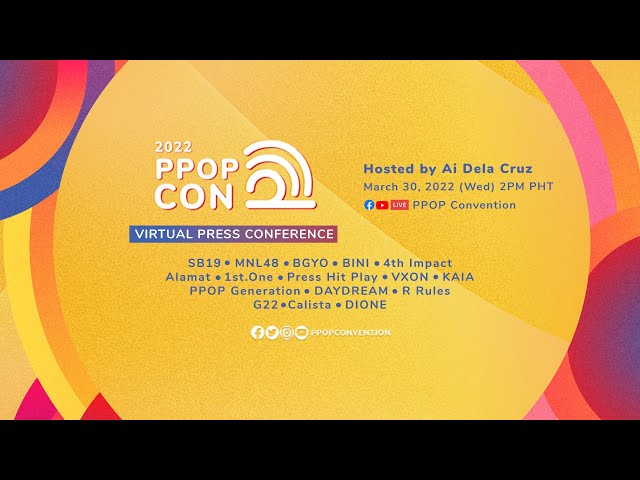 For most of the participating groups who made their debut during the COVID-19 pandemic, the 2022 PPOPCON will be their first chance to perform live and in front of their fans.

Meanwhile, DAYDREAM shared that they’re taking this chance to give back to their supporters. “Nakakataba ng puso (It’s heartwarming) to see fans that are real and genuine in supporting not just us but everyone in the P-pop community. Sila ‘yung nagpo-propel sa amin (They propel us) to give more talent and more passion when performing. We’ll give it our all.”

The 2022 PPOPCON is really tailored for the fans’ enjoyment. There will be a two-day convention that will feature fanbase activities, booths, selling of official merchandise, and games.

A live concert at the Smart Araneta Coliseum on the second day will cap off the event. While there’s still no official confirmation of possible collaborations yet, fans have expressed their excitement in seeing several P-pop groups share one stage.

The event also made sure to cater to fans who can’t be physically present in the concert, as it will be available for streaming for those who’ve purchased tickets.

(Fan bases really have a huge contribution in the P-pop movement because they’re the ones listening to our music and attending our events.)

Despite the problems brought upon by the pandemic, it’s undeniable that the local P-pop scene has changed significantly – even making waves in the international stage with just their virtual performances. This, the groups say, is a testament to the P-pop artists’ talents.

“We have a lot of world-class talent here and it just has yet to be discovered,” DAYDREAM said when asked about the international recognition that P-pop is getting. VXON added, “We would like to thank our seniors for working hard and raising our flag, for introducing P-pop in the international scene.”

2022 PPOPCON promises to give fans the ‘time of their lives’ Now that the 2022 PPCON has opened the possibility of having several P-pop acts together, most of them believe that this is just the beginning for the Pinoy pop industry, and that it will continue to flourish given their fans’ support.

“For the P-pop fanbases, palagi naming sinasabi na (we always say that) ‘P-pop rise,’ but P-pop groups can only do so much. But the ultimate weapon for P-pop to rise is our fans. We will always need their help,” 1st.One said.

SB19, meanwhile, stressed that this can open doors for the P-pop scene. “Now, we have everyone here and I believe there’s strength in numbers. Someday, magkakaroon na talaga ng P-pop na genre na makikilala all over the world. (Someday, the P-pop genre will be known all around the world.)”

They added that the 2022 PPOPCON is a way for the fanbases to unite, too. “Yung mga grupo dito, magkakaibigan kami. We share one heart. Buhay na buhay ‘yung pusong Pinoy sa amin, and our fans do have that as well. Hindi malabo na makilala ‘yung kultura ng Pilipinas sa buong mundo.”

(All the groups here, we’re all friends. We share one heart. We’re so proud to be a Filipino, and our fans carry that pride, too. It’s possible that the Filipino culture will be recognized by the world.)

Tickets for the 2022 PPOPCON are available at all TICKETNET outlets or via their website.