‘Wavy Baby’ and beyond: What it means when Bisaya musicians are treated as collateral damage 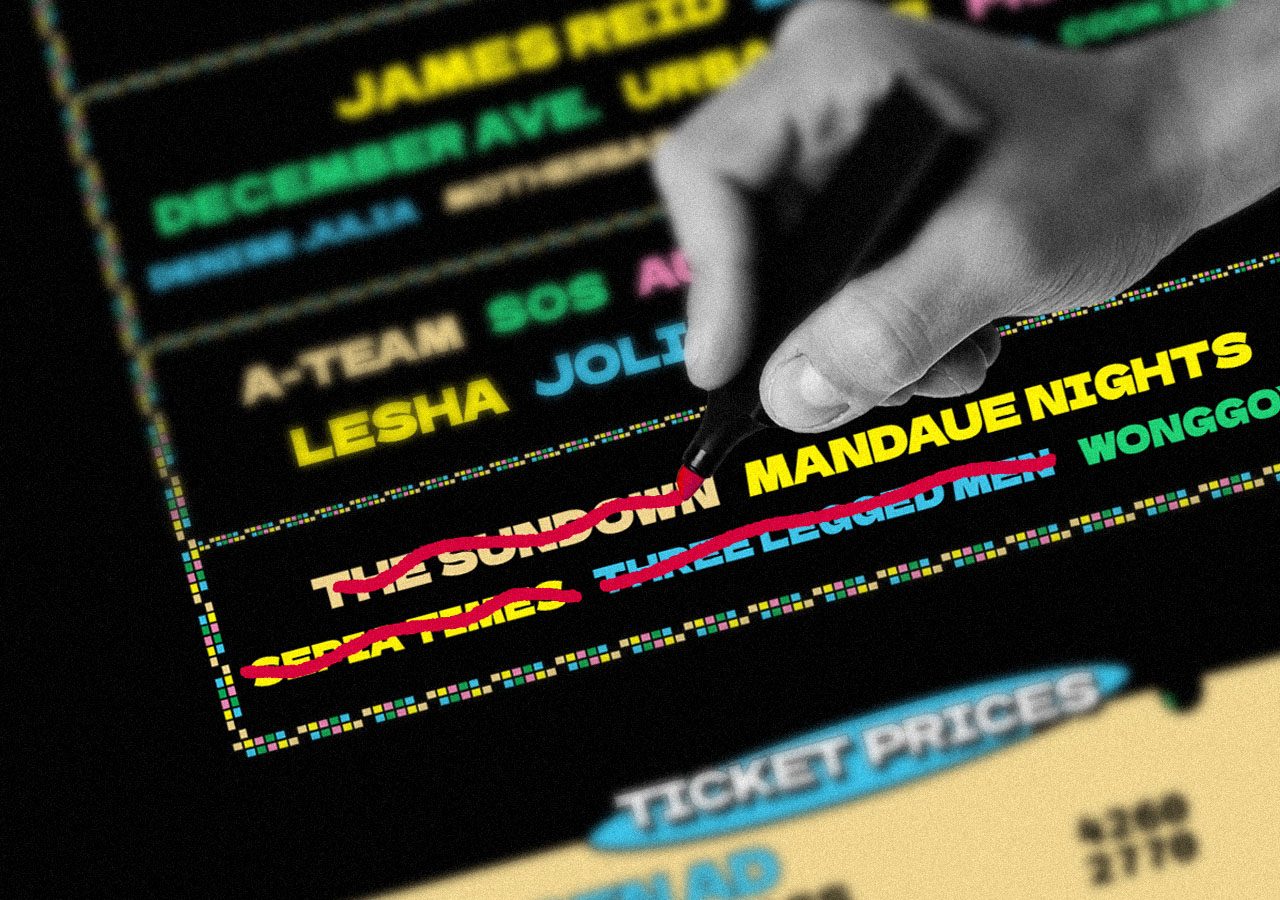 Over the weekend, three Cebu-based acts that were slated to perform at Careless Music’s Wavy Baby Festival released statements on their removal from the festival’s lineup.

It was the latest in a string of controversies surrounding the James Reid-led Sinulog music festival. Inclement weather in Cebu last Friday forced organizers to delay the opening of Day 1. In response, the Careless Music team made entry for the first day free to the public, with festival-goers struggling to walk through the muddy concert grounds. This then led to the original schedules for the music festival being shuffled to accommodate the delays. As a result, some of the acts were abruptly stopped from performing altogether.

Careless Music’s original lineup was billed as the “first of its kind” for Sinulog, with a number of international and Manila-based artists performing for the first time in the Queen City of the South. Among these acts were Korean-American rapper Dumbfoundead, Filipino-Canadian rap duo Manila Grey, GOT7 member Bambam, and Korean singer Sunmi, just to name a few. Careless Music also featured several of their own artists, such as new signees Destiny Rogers, August Wahh, and SOS (formerly known as She’s Only Sixteen). At the bottom of the bill was some of Cebu’s most prominent acts — rapper Cookie$, alt pop duo Sepia Times, Wanderbattle 2020 winners The Sundown, Three Legged Men, Mandaue Nights, and The Wonggoys.

For the local Cebuano fan, these bands are mainstays in the scene, each with their own strong community of fans and fellow artists. It made sense that they would be included in a festival that proudly used Sinulog as part of its marketing. In an official TikTok posted by the label, James Reid shared that they specifically chose Cebu as a venue because “Sinulog is one of the biggest cultural festivals in the country.”

However, on January 14, Sepia Times, The Sundown, and Three Legged Men each issued statements on their sudden removal from the festival lineups. All the reasons were similar, with each act citing that they were unable to perform “due to circumstances beyond their control.” In their statement, Sepia Times shared that they were already at the venue “when the events started to unfold.”

Following this, local folk musician and guitarist of The Sundown Vincent Eco shared on Facebook in a mix of Bisaya and English, “Yet again, [they] hold concerts in Cebu but made Cebu bands disposable.”

Out of the original eight non-Careless affiliated Cebuano acts slated to perform during the festival, only four were able to: Pinoy rock mainstays Urbandub and Franco, rapper Cookie$, and Mandaue Nights.

Cebuanos were quick to call out the inconsistencies of the festival in treating their invited artists: if time constraints were an issue, then why did the organizers allow for acts that weren’t able to perform on Day 1 (SOS, James Reid, and Manila Grey) to perform on Day 2 instead? For a festival that capitalized on our festival, on our culture, it was quick to turn Cebu-based acts into collateral damage to accommodate delays.

On January 17, James Reid and Eventscape Productions Manila released statements apologizing to the bands cut from the lineup as well as to their fans. In a video, Reid said, “I would like to sincreley apologize to our Cebu artists, [the] Wonggoys, Three Legged Men, The Sundown, and Sepia Times for not being able to share the stage with you this time. But thank you for allowing us to come to your hometown and throw this amazing experience. I promise we’ll make it up to you. You guys are all legends, thank you.”

The Eventscape Productions statement shared a similar sentiment, emphasizing that some Manila and international artists were also not able to perform, “not just Cebu bands.” They continued by saying that “it was never [their] intention to insult the international, Cebu, and Manila artists who have graciously accepted our invitation.”

While the apology is welcome, this issue has shed light on the divide between the Manila-centric mainstream and the music scenes of Visayas and Mindanao.

Last October, the Vispop Music Festival issued a strongly worded statement appealing for the support of Cebuanos for its annual Sinulog festival. Cebuano songwriter and co-founder of Vispop Jude Gitamondoc wrote, “…Right now, Manila organizers are gearing up their machinery to stage multiple music festivals during Sinulog Week […] Sugod pa lang karon [As early as now], we’re beseeching our fans and supporters to stand by, with, and for Vispop Music Festival. We may not have as much funding and clout as these more established music festivals, but we trust that we will have you, our audience, to rally with us and for us amidst the noise by bringing people to our show. This is our chance to prove that Bisaya music deserves its long overdue space in OPM.”

The cultural, economic, and social divide between Visayas-Mindanao and “Imperial Manila” manifests itself in all aspects — even music. In an interview between HipHopDX Asia and Bisaya rap OGs Midnasty, the latter shared how in the past, Bisaya rap would be treated as “novelty songs.”

(That’s the reason why, even us, we make it a point to rap in Bisaya because we want to push the language further. Even us in Midnasty, our responsibility is how to put something new, a unique sound, into Bisaya music.) The problem isn’t the lack of Bisaya musicians. In fact, there are more than enough Bisaya musicians in every genre across Visayas and Mindanao. For example, Midnasty’s Paraisla movement has built a network and community providing support for Bisaya rappers and producers. This has spawned its own record label and different collectives that provide Bisaya rappers with a platform for their music. Multiple Cebu-based record labels such as 22 Tango Records and Melt Records have continually pushed to provide opportunities for budding artists across the region. Vispop Music Festival, which also organizes Vispop, a songwriting competition and camp for Bisaya songwriters, has been organizing events for the past 10 years.

When Cebuano — and by extension, Bisaya— acts are turned into collateral damage, it further deepens the existing divide that is prevalent in our country. Issues surrounding the quality of life and rate of development in different provinces outside of Metro Manila goes beyond numbers. Music, art, and culture is sacred because these are what drive and represent our identity. Whether you like it or not, the concept of identity in the Philippines is ethnocentric, meaning that every province has a unique identity associated with their cultures. For example, in Cebu, some of the pillars of what makes us “proudly Cebuano” are things like Sinulog, lechon, our language, and other common experiences that are uniquely ours. Cultural festivals are the pride of every community and are often defined by them — whether it’s Ati-Atihan, MassKara, Nazareno, and more.

When Manila-based labels and acts disrespect our musicians, they disrespect our identities as Cebuanos, regardless of their intentions. More than that, when a festival like Wavy Baby capitalizes on our cultural festival yet removes a platform for Cebuanos to showcase their experiences through music, it goes back to the very problem that Midnasty pointed out before: that Bisaya music is treated as a novelty.

In a way, the controversies surrounding Wavy Baby Festival has brought to light the importance of carving out spaces for Bisaya music to shine in the mainstream and beyond the communities that are already loyal to them. What could have served as an avenue to highlight Cebuano talent in the heart of the Visayas was turned into an encroachment into a scene that has been regularly pushed to the sidelines.

The challenge for Manila-based labels and organizers moving forward is simple: if you’re going to brand yourself as inclusive and diverse, then the least you can do is let our acts perform. – Rappler.com