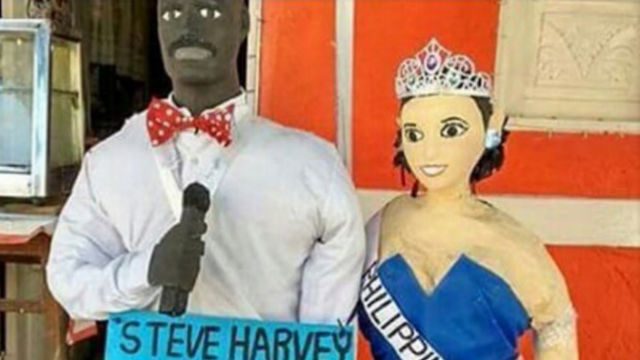 Facebook Twitter Copy URL
Copied
The Colombian also takes down the viral video, plus his photos of the Pia Wurtzbach and Steve Harvey effigies

In his message, Noider Almanza Barraza explained that the burning of effigies of controversial personalities is a New Year tradition in Colombia. It represents leaving behind what happened in the past year.

In Spanish, he said: “The video that I uploaded to my social networks showing some dolls on New Year’s Eve is a tradition of my country. We burned dolls of personalities who have caused controversy or been in the news in 2015 to leave behind what happened in 2015. With the burning of the dolls, we begin a new year. At no time did we mean to hurt or offend the people of the Philippines. I am very sad and repentant because of the stir caused by the video, but I was not the only one who burned such dolls. I ask for forgiveness.”

On January 2, Noider’s video of his fellow Colombians burning effigies of Pia and Steve went viral, angering Filipinos, who said that the Colombians were bitter.

Noider’s video and his photos with the effigies are no longer on his Facebook page. His Instagram account, where he also posted a photo of himself posing with the effigies, is now set to private.

During the coronation night of the Miss Universe 2015 pageant, Steve mistakenly announced that Miss Colombia Ariadna Gutierrez won the crown. He later apologized and corrected himself, saying that it was actually Pia who won.

Noider isn’t the only Latin American who posted about burning the effigies of Pia and Steve on New Year’s Eve. Others posted photos of their effigies of the two on Twitter as well.

The burning of effigies, called año viejo (old year), is a New Year’s Eve tradition in Latin American countries. The effigies are burned at the stroke of midnight.

What do you think about the issue? Let us know in the comments! – Rappler.com