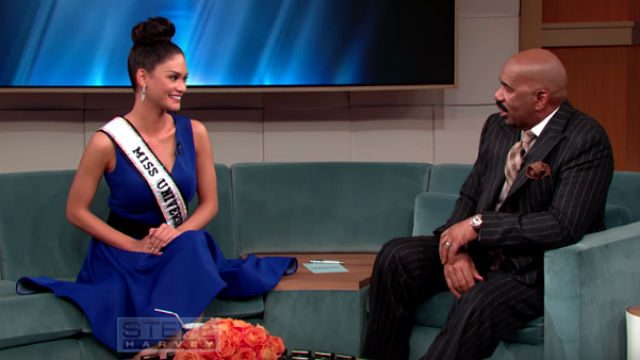 In the two-part interview on The Steve Harvey Show titled “Miss Universe: The Truth,” Steve answered questions from the audience before Pia went onstage. Pia also came to Steve’s defense, saying he attended all the rehearsals of the competition, contrary to rumors that he was at gambling at casinos and drinking.

During the interview, Steve asked Pia what she felt when he came back onstage after Miss Colombia, Ariadna Gutierrez, was crowned. Pia shared that when she was called first runner-up, she was already happy because of the Filipinos audience’s support. But when she saw Steve come back onstage, that she knew there was a problem.

“When we rehearsed it, everything happened so fast. As soon as the girl was crowned, she gets to do her first walk right away. And I was waiting for that. We were all waiting for it,” said Pia.

Miss USA Olivia Jordan, who won second runner-up at the pageant, was in the audience of The Steve Harvey Show episode. She said that when Steve went up onstage to correct his mistake, she thought he was going to tell a joke, given that the comedian joked around a lot during rehearsals.

Pia added that she had mixed feelings about winning, because of her concern for Ariadna.

“I tried to keep a safe distance from her as not to disrespect her,” said Pia about how she felt as she stood next to Ariadna during the coronation. “Because I didn’t want her to feel bad. I was being sensitive to her feelings.”

Later in the interview, Steve asked Pia if she had a message for Ariadna. Pia said: “I’d like her to know that I hope this doesn’t change her perception of Miss Universe, of the organization, of you, of me. It was an honest mistake, you know, mistakes happen, especially on live television. I hope that she realizes very soon that she’s strong, she’s beautiful, with a lot of potential. And I hope she sees the positive in all of this.”

When asked what she hopes people take away from the controversy, Pia answered that she wants people to be as inspired with her story as she was with a quote she read before: “A real queen knows how to make an empire with the same stones thrown at her.”

“And you too, Steve, don’t beat yourself up for this anymore,” Pia added. “Come on, let’s move forward, let’s just be happy.”

On the 2015 Miss Universe coronation night on December 20, host Steve Harvey mistakenly announced that Ariadna won the title. He later apologized, said that she was the first runner-up, and that Miss Philippines Pia Alonzo Wurtzbach was the winner.

Last January 4, Steve spoke up for the very first time about the incident, saying he tried to reach out ot Ariadna after mistake, but never got any response.

Steve also said that he did not do it to boost the pageant’s popularity and that the only thing he regretted about the situation was how Ariadna felt.

Steve is set to speak with Ariadna on January 19 (January 20 in Manila) on his show. – Rappler.com