FINALE. 'He's Into Her,' starring Donny Pangilinan and Belle Mariano is airing its last episode on July 30.

“Expect the unexpected.” That’s how Donny Pangilinan described He’s Into Her as the series near its end.

“It’s been a ride and I can’t wait for you to see it. All the questions that you have, the emotions that you have been feeling, this is where it all ends. We know it’ll be worth it,” Donny told the press in a blog conference on Monday, July 26.

Writer Vanessa Valdez also promised fans that they’ll enjoy the last episode, which is due to air on Friday, July 30. “We wanted the series to be different but still very much an enjoyable experience from the book that it was based on… Kung bongga ‘yung episode one, dapat mas bongga ‘yung episode 10 (If the first episode was already good then the tenth episode should surpass that). We have to end on a high note.”

Director Chad Vidanes also said that shooting the finale episode wasn’t easy. “Execution wise, this is also one of the most challenging episodes I have to shoot…. I had to compromise a lot. ‘Yung grandest ng eksena (The grandest of the scene), I had to maintain it even if I had limited resources,” he said.

The cast said they were in disbelief that the series was already ending, especially since it was two years in the making. The cast members were first announced in 2019, but with the COVID-19 pandemic and ABS-CBN shutdown in 2020, the production for the series was delayed. The series only premiered in May 2021.

Spotlight: Why ‘He’s Into Her’ is a must-watch 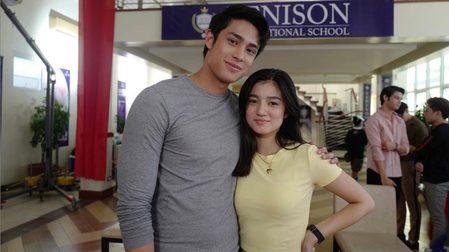 Belle Mariano admitted that she even thought that the series would no longer push through. “I felt sad and natakot po ako. What if hindi matuloy ang ‘He’s Into Her’, ang mga nakalatag na project? (I was scared. What if He’s Into Her, as well as other projects, wouldn’t push through?)

DonBelle as a loveteam

For lead stars Donny and Belle, being paired together was one of the most unexpected highlights of He’s Into Her. “Sometimes, things just happen, and things work out well. And this is the primary example,” Donny said.

Belle shared that while this was their first project together, working with Donny was easy. “We’re really happy with the company of each other,” she said.

With the huge success of He’s Into Her, DonBelle, Donny and Belle’s loveteam name, is one of the rising loveteams of their generation. Donny said that while this is flattering, he and Belle don’t want to feel the pressure.

“Belle and I are very focused. There are like many voices and stuff going around. Honestly, we don’t want to get super pressured that in everything we do, we have to think about it.. Supportive lang kami sa isa’t-isa (we’re just really supportive of each other), we’re very overwhelmed and humbled by the support,” Donny explained.

The actor also announced during the blog conference that he and Belle are set to work on another project after He’s Into Her.

Director Chad and writer Vanessa were all praises for the rest of the He’s Into Her cast. Most of the cast count He’s Into Her as their first major project in ABS-CBN.

“These kids deserve every bit of the success they’re experiencing right now. I was a witness of all their hard work and passion into this project. Sobrang nakakaproud talaga (I’m so proud),” Chad said.

Vanessa added that she’s thankful to have humble cast members to work with. “Ang swerte namin na hindi lang sila gwapo, magaganda at talented, pero mababait pa. Sobrang dali para sa amin na mababait ang katrabaho namin. (We’re lucky that they’re not just handsome, pretty, and talented but all of them are nice, too. It was easy to work with them because they were so kind.)”

Vanessa said that if given the chance, she still wants to work with the cast, hopefully, for a second season of He’s Into Her. “All of us here want a second season, and are hoping that there’s going to be a second season. We encourage the fans to pray for that.” – Rappler.com