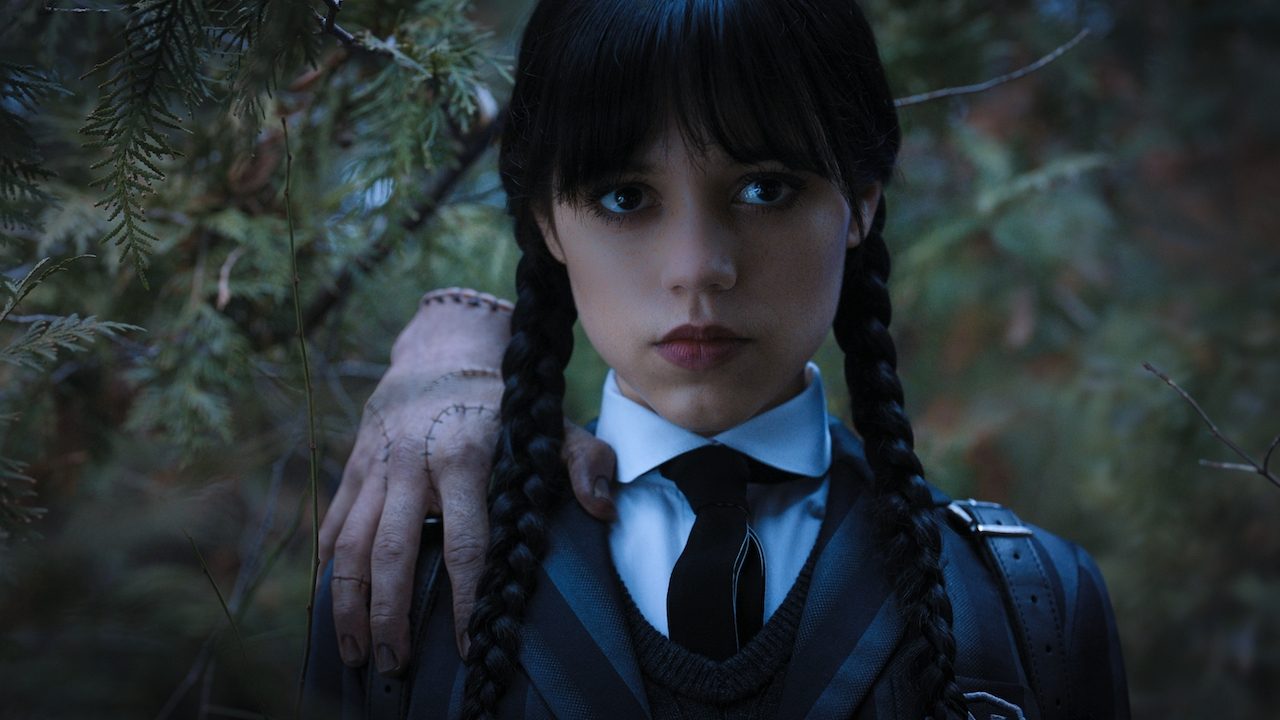 WEDNESDAY. Jenna Ortega steps into the iconic role of Wednesday Addams in the upcoming Netflix series helmed by Tim Burton.

MANILA, Philippines – Wednesday Addams, the sardonic and sadistic daughter of the darkly kooky Addams family, is one the most recognizable characters in pop culture – a presence at every Halloween party, as well as the many video games, stage plays, television shows, and films based on the fictional family.

Arguably the most indelible portrayal of Wednesday is that of Christina Ricci’s, whose breakout role was playing the character in the 1991 film The Addams Family and its sequel, Addams Family Values.

In Netflix’s new show Wednesday, it is up-and-coming actress Jenna Ortega who dons Wednesday’s iconic braids and dead-eyed stare, and for most people, it is Christina’s Wednesday she will be measured against.

In fact, Jenna got to work with Christina on this series too – Christina plays one of Wednesday’s teachers at the Nevermore Academy.

Despite sharing a few scenes together, the two actresses sidestepped any discussions on the character that now connected them in a very profound way.

“We did not talk about Wednesday once. And it’s funny because I think the assumption was that there’s a part of me that really didn’t want to, and we met each other, and I think it was very clear that she really didn’t want to either,” Jenna told Philippine press at a roundtable interview.

“Our Wednesdays are very different and if anything I was just kind of more interested in where she was from and what her deal was and what her experience was. I think we relate a lot and I think we got along really well,” Jenna added.

“When you don’t talk about the fact that yeah, she’s been in the same exact get-up as you before, it makes it a lot easier to do your scenes and treat each other like regular people and not somebody you looked up to your entire life,” she said.

Jenna’s Wednesday is decidedly different from any portrayal of Wednesday we’ve seen before. Netflix’s Wednesday is part coming-of-age story, part crime thriller, set in a whimsical world where vampires, sirens, werewolves, and other supernatural creatures co-exist, albeit at arm’s length, with so-called “normies.” In this series, we see more of Wednesday’s inner world, and get to know her character and her relationships in a deeper way.

Taking on such an iconic role seems part of Jenna’s upward trajectory in Hollywood. The 20-year-old actress started out with small parts in shows like CSI: NY and Jane The Virgin, took the lead in the Disney Channel series Stuck in the Middle, and proved her acting mettle in the 2021 drama The Fallout.

Like Christina, Wednesday might just be her breakout role, especially since she got to work with an auteur like Tim Burton, who directed four out of the eight episodes of the show and served as its executive producer.

Director Tim Burton on ‘Wednesday’: ‘I felt it was written for me’ The weight of this role was not lost on Jenna, who described the experience as “terrifying.”

“Especially working with someone like Tim Burton for the first time, who is a legend…you know you never really know what to expect, and you want to do a good job, and I respect this character so much I just wanted to do her right,” she shared.

From her first day on set, Jenna said they went full speed ahead. They were shooting the first scene in the series, which involves Wednesday carrying two massive bags filled with piranhas.

As Jenna shared, it was her first time to wear Wednesday’s signature double braid and don the make-up, and Tim was particular about her look.

“He’s picking my hair with a hairdresser’s comb for 10 minutes, making my fringe just right so it’s the way that he wants, and I’m holding those piranha bags which are filled with water and they’re so heavy but I have to be still, and I’m trying not to show that my arms are shaking like this,” Jenna said.

“I couldn’t blink, he liked it when I didn’t blink. We hit the ground running and I wasn’t prepared for that at all. It was a weird adjustment, but it was exciting at the same time,” she said.

One thing that surprised Jenna about working with Tim was how he, as she said, “just kind of ‘wung’ it.”

“It came so naturally to him. We didn’t have a shot list, we would go to set and we didn’t know what we’d be doing that day and he kind of just made it up on the spot,” she said. “For certain things to turn out as beautiful as they did or as funny as they were, I think it’s just a testament to how much of a true artist he is and it’s really wonderful to experience that firsthand.”

Legends on and off screen

Aside from a film legend behind the camera, Wednesday also has its fair share of legends on screen. There is of course Christina, whose presence legitimizes the show as another Addams family story. The other cast members include some of Hollywood’s most recognizable stars: Catherine Zeta-Jones and Luis Guzman as Wednesday’s parents Morticia and Gomez Addams, and Gwendoline Christie as Principal Weems, the mysterious headmistress of Wednesday’s school.

For Gwendoline – known for her roles in Game of Thrones, Star Wars, and most recently, in Netflix’s adaptation of Sandman – getting to work with Tim was a dream come true.

“I’ve wanted to work with Tim as far back as I can remember. He’s always been one of my dream directors and I truly love his work. I think he’s a master storyteller,” Gwendoline shared with press at a roundtable interview.

“I’ve also always really loved The Addams Family. I loved the black and white TV series, I really loved the films of Angelica Huston and Christina Ricci, and so I just knew it would be in safe hands. I knew that his sensibility would work so perfectly with the Addams family and I wasn’t disappointed,” she shared.

She said that Tim is a “hugely collaborative director,” who asked actors what they thought of their characters, how they wanted to look.

Gwendoline also cherished being able to play a character who is a bit of a gray area. In the series, Weems constantly keeps one guessing – whether she’s a good guy or a bad guy is hard to say, especially as the episodes draw on.

“It’s very challenging as an actor to inhabit that and to explore it and bring reality to it and it forces you to really examine the human experience and vulnerability, what that is, and ambition and desire, what they are. So I think it affords actors the luxury of thinking what it means to be human,” she said.

Whether hero or villain, Weems serves as a great counterpoint to Wednesday – the authority figure constantly looming over our beloved anti-hero. Together, their characters bring weight to what is ultimately a coming-of-age story told from the point of view of an outcast.

For Jenna, portraying an outcast is “the greatest.”

“I relate to her and I feel very similar to the way that she does. I feel like oftentimes I ostracize myself, I don’t know many people, I enjoy my solitude, we have a lot of the same interests,” Jenna said.

“I think it’s really important for people to see and especially, it’s really wonderful that she’s kind of the lead anti-hero and not just some side character,” Jenna muse. “Freak representation is crucial and I think it’s really nice for them to be seen in a positive, disturbing light.” – Rappler.com

Wednesday premieres on Netflix on November 23

Chris Rock to be first comedian to perform live on Netflix