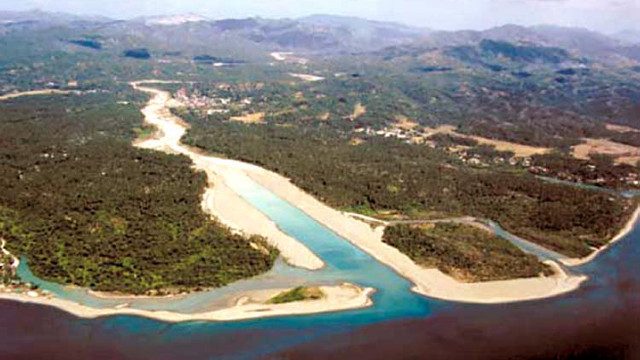 FILE PHOTO. An aerial view of the dredge channel in the Boac river estuary where mine tailings from Marcopper spilled into the sea in 1996. Photo from Newsbreak/ Marcopper Mine Post-Spill Impact Assessment December 2001 report

MANILA, Philippines – In a decision hailed by environmental defenders, a regional trial court in Marinduque ordered Marcopper Mining Corporation to pay damages claimed by persons affected by probably one of the worst mining disasters in the country which happened in 1993.

Presiding Judge Emmanuel Recalde of the RTC Marinduque Branch 38 directed Marcopper to pay the 30 plaintiffs P200,000 each as temperate and P100,000 as moral damages. The decision also awarded P1 million for all the plaintiffs as exemplary damages.

“This is a victory for the plaintiffs who had waited two decades for justice as much as it is for the other plaintiffs who had unfortunately died in the course of this case. We celebrate this ruling and thank Judge Emmanuel Recalde for taking up cudgels for the survivors and the environment,” said Elizabeth Manggol of the Marinduque Council for Environmental Concerns said.

In December 1993,  the Maguila-guila earthen dam, a Marcopper siltation dam, collapsed due to heavy rains spawned by Typhoon Monang. The breach resulted in large volumes of mine wastes pouring into the Mogpog River.

Immediately affected were the plaintiffs who were from Barangays Magapua and Bocboc, in Mogpog town in Marinduque.

“This emblematic case should serve as a warning for communities who wish to embrace mining. Litigating mining-related cases like this celebrated case is a slow march to justice. Communities must think their decisions through for the impact of the environment can be irreversible,” said Ryan Roset of the Legal Rights and Natural Resources Center (LRC).

“In the case of Marinduque, the (Mogpog) river affected by the spill is all but dead. With this ruling, Judge Recalde has shown that environmental cases do have a fighting chance in our judicial system,”  Roset added.

Three years, Marcopper again figured in a second mining disaster. In March 1996, a damaged drainage tunnel of a large pit containing leftover mine tailings causing the flow of toxic mine waste into the Makulapnit-Boac river system. This toxic waste effectively rendered the Boac River a dead river.

Look Back: The 1996 Marcopper mining disaster Suspension of Altai mining ops in Sibuyan welcomed, but ‘fight far from over’