Mar 16, 2013 9:13 AM PHT
Facebook Twitter Copy URL
Copied
A young crowd flocks to Escolta for a Saturday market with a historic and cultural twist 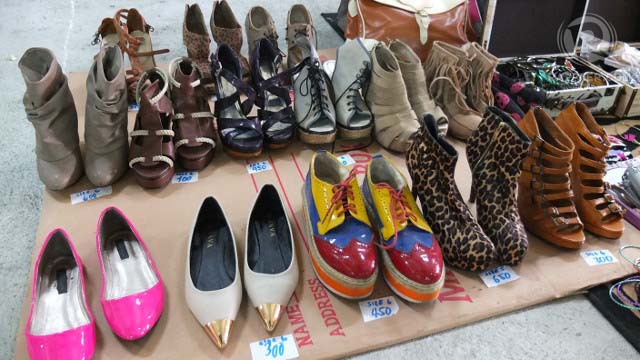 A high-ceilinged, bare-walled space in First United Building was set up with mats and tables where vendors displayed vintage bric-a-brac, second-hand books, clothes, antique jewelry, and furniture for sale.

Once upon a time, the exact same space had been Berg’s Department Store, one of the major stores in Escolta in the 1940s.

The concept of holding a Saturday market was inspired by this piece of history.

Mark Salvatus, head of 98B, the artists’ collective that put up the event, told Rappler that his group asked the building’s owners, the Sylianteng family, if they could use the space.

Rental of one space cost P500 for the entire day. Shireen Seno, a 29-year-old filmmaker (directed “Big Boy” which premiered at the International Film Festival Rotterdam), was one of the vendors who signed up only a week before the event.

She displayed her sartorial wares on a banig and said her reason for joining the market was simple: “I have a lot of stuff that I’m not really using so I’d rather just get rid of them and have some space at home.”

The funky second-hand shirts and tops she was selling were some of the more affordable goods, priced from P100 to P150.

One booth was selling vintage postcards for P200 to P500 pesos. Blankets from the 19th century were priced from P2,000.

One vendor sold his old books for P20 to P200 and gave you a stem of white rose for every purchase.

The success and positive reception of the project has encouraged Mark and the rest of 98B to hold the market twice a month, if possible. Mark of 98B said “Saturday Market @Escolta” is part of bigger dreams to spark interest in the historical street.

“In history, Escolta had a lot of firsts: first ice cream parlor, first cinema. The younger generation just don’t know about it so they prefer to go to malls.

“This event makes Escolta a hip place to attract the younger crowd. At the same time, there is history and culture,” he told Rappler in Filipino.

On the day of the Saturday market, Heritage Conservation Society Youth held a tour called “Escoltara!” to explore the district and get to know its many Art Deco buildings.

For “Escoltara!” tour guide Stephen Pamorada, the street is ripe for tours and public interest. “Since I live in Binondo, I always pass by this place. I appreciate the old buildings that I see so I want to share this appreciation with others. People are interested in the history behind the buildings and the street itself.”

According to Cesar Ramirez, a young architect and member of HCS-Y, the decline of Escolta began when its banks began closing shop and transferring to then up-and-coming business districts like Makati.

When the banks left — and the people with it — the remaining stores closed down one by one. Today, Escolta is a backwater, a mere shell of its former glory. Only locals visit the area with only a few commercial establishments to attract more people.

It is dwarfed by its busier neighbors: Binondo, Quiapo and Divisoria. Escolta of our dreams

But events like the Saturday market and tours like “Escoltara!” aim to shine the spotlight back on Escolta.

“This is a catalyst for change,” said Mark. “For me, it’s fun to do different projects; not only museums or galleries but projects that are community-based.”

“It’s a way to show people that Escolta is not a dead spot.” “Why don’t people visit Escolta? Because there is no activity. For example, if you’re a foreigner or tourist, you’ll walk through the street and that’s it. But if there’s a café, market or bar, you can have different activities not just for the employees or locals but for everyone.”

Bigger plans to revive Escolta are already underway. The BPO@Escolta initiative is already restoring a 90-year-old building to become a call center. The heritage building used to be the site of the First National City Bank and will become the Juan Luna e-Services Building in a few months under the supervision of Escolta Commercial Association Incorporated (ECAI), the group reviving Escolta.

If all goes according to plan and more investors pour in funding for the historical street, Escolta will rise from the ashes once more. – Rappler.com