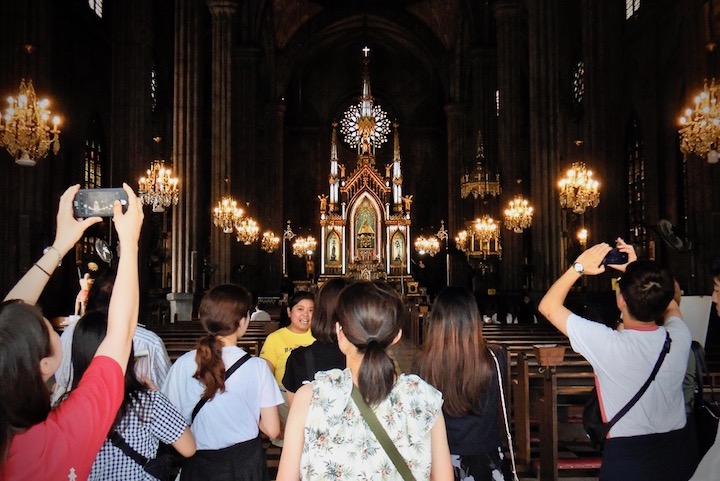 MANILA, Philippines – The San Sebastian Basilica, one of the oldest churches in the Philippines, is holding tours for the public as part of its celebration of the Lenten season.

On March 14, March 28, and April 5, the Basilica will be holding tours, led by the San Sebastian Basilica Conservation and Development Foundation. The tour is priced at P250 per person. The proceeds will help in the conservation and restoration of the church.

The basilica has long been described as the “quieter neighbor” of the much-flocked Quiapo Church, where the image of the Black Nazarene is housed. The San Sebastian Basilica also keeps a centuries-old image: the Our Lady of Mount Carmel de San Sebastian.

The image arrived in the Philippines by galleon in 1618, and continues to enjoy a large following from devotees who pray for their wishes to come true.

It is this image that is parked at the terrace of the Basilica in the annual Dungaw during the Traslacion of the image of the Black Nazarene—a reenactment of a station in the Via Dolorosa when Jesus meets Mary as he carries his cross to his crucufixion.

Tourists will not go home empty-handed. After the tour, guests will be given a bottle of infusion oil with the scent of the Marian rose, photos of the holy images of the Church, and an invitation to an upcoming exhibit of the Basilica on the images of Mary. – Rappler.com

People interested in the tour can reserve slots here. The foundation can be reached through the hotline number 8-708-5122.