There are also licensed nurses, campus queens, a balikbayan, and a singer’s sister. Whoever wins the crown will eye a historic “back-to-back” victory for the Philippines in the international pageant. (IN PHOTOS: Miss World Philippines 2014 talent show)

Before the ladies battle it out for that opportunity, it’s time to check in on your favorite candidates. 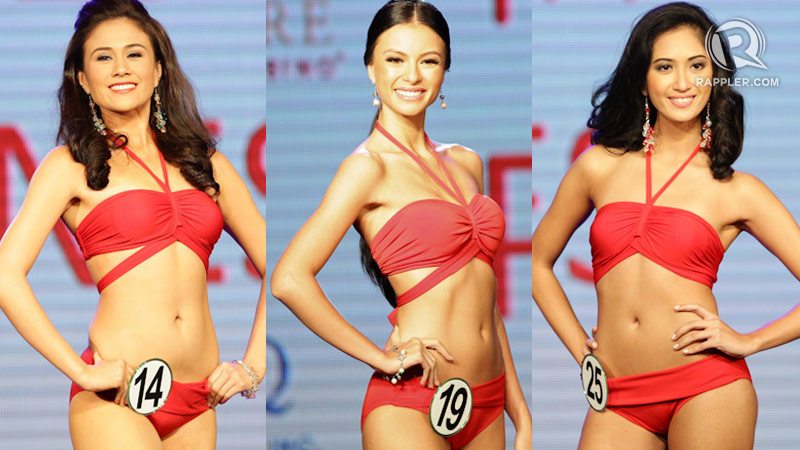 Megan’s experience as a TV host and actress worked to her advantage when she competed in Bali, Indonesia last year. These 3 ladies hopes to follow her footsteps.

The most popular among the candidates is Filipino-German actress and professional model Valerie Weigmann (#19). She recently joined the noontime show Eat Bulaga but is best remembered for her stint in the reality show Pinoy Big Brother in 2008.

She has graced the runway for some of the best names in the Philippine fashion industry and has been on magazine covers prior to joining the pageant.

Next is former Bb Pilipinas candidate Nicole Donesa (#14), a contract artist of GMA-7. Raised in San Francisco, California, she used to perform in various Fil-Am events in the US before moving to the Philippines. She has appeared on the Kapuso Network shows My Destiny and Bubble Gang.

Technically, Eliza Johanna Cruz (#25) is not a movie star, but her family name gives her that celebrity status. She is the sister of singer Geneva Cruz and holds a human resource management degree from De La Salle-College of Saint Benilde. 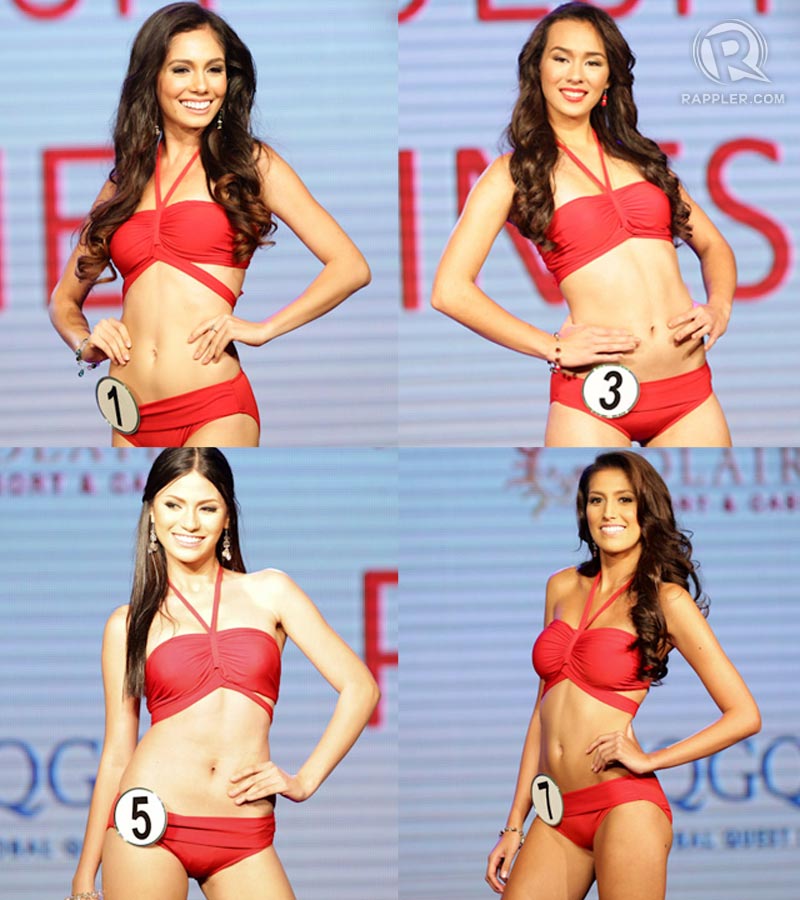 Mixed-race beauties are often successful candidates of MWP based on the previous winners of MWP. Gwendoline Ruais (2011) is half-French, Queneerich Rehman (2012) is half-Pakistani while Megan (2013) is half-American. This year, these beauties are again among the strongest candidates in the competition.

Two Filipino-British ladies are hoping to wear the Philippine sash in Miss World 2014, which will be held in its home city of London on December. One of them is Lorraine Kendrickson (#1), a 19-year-old print and ramp model. She was Miss Dumaguete 2013.

Another is Rachel Louise Peters (#7) of Camariners Sur. She holds a business degree from La Trobe University in Victoria, Australia.

Aside from Valerie, another Filipino-German beauty is eyeing victory. She is 19-year-old model Gazini Christiana Ganados (#5) from Cebu City. No stranger to pageants, Gazini was a Top 10 finalist in Miss Bikini Philippines 2014.

Representing the Filipino-American community is 18-year-old Alexa Rae Kirby (#3). This summer camp counselor earned an automatic slot in this year’s roster of candidates after winning the Miss Philippines Quest-USA pageant early this year. Prior to that, she joined Miss Teen Pennsylvania USA and Miss Teen Philippines. 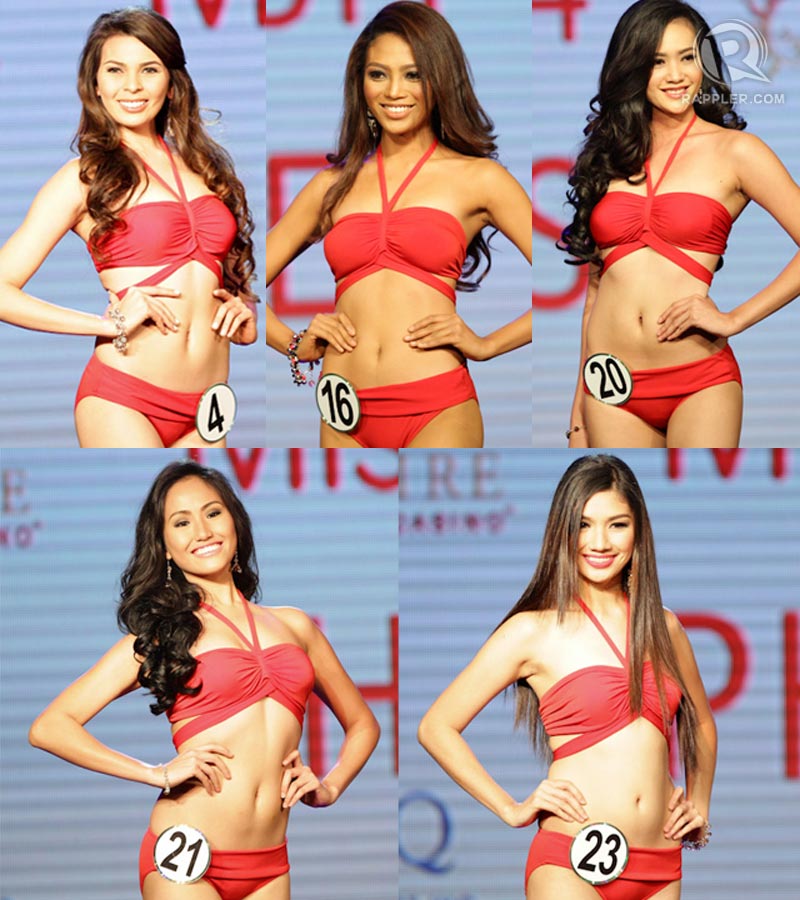 Did you know that before Gwendoline and Queneerich made it to the Miss World stage, they were Bb Pilipinas semi-finalists? Like them, these candidates crossed over from another national pageant in hopes of winning a crown.

One of the most experienced candidates is 22-year-old Ina Dominica Guerrero (#16), who represented Daraga, Albay in Miss Philippines Earth 2012. She was a Top 10 finalist in Miss Bicolandia 2014. 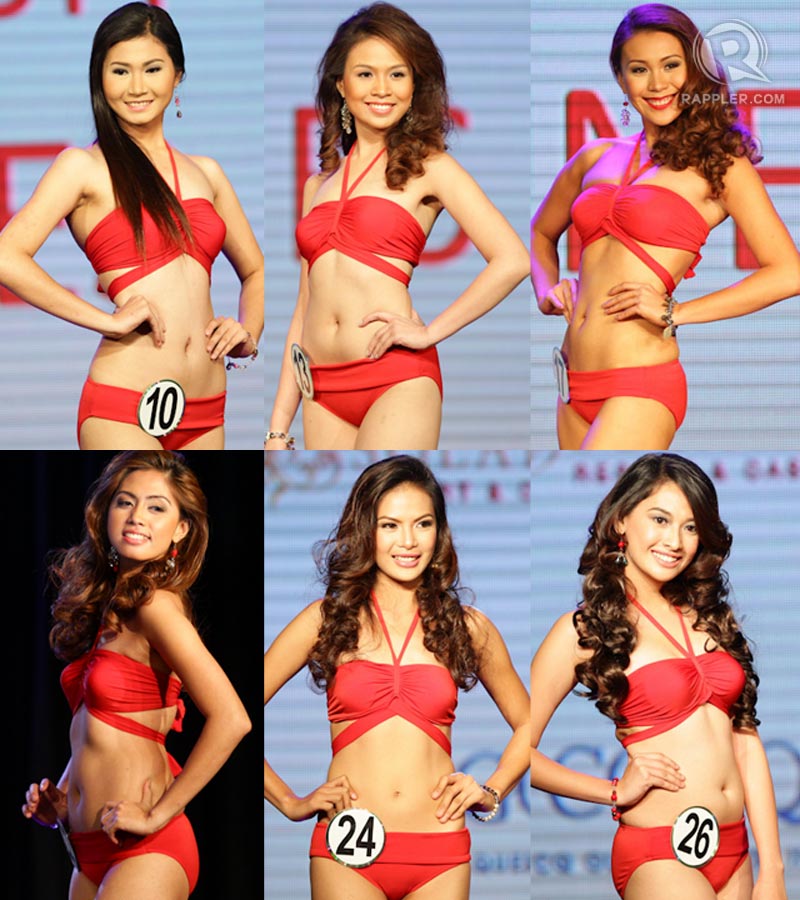 Most contestants have to take a leave of absence from their day jobs to focus on their beauty pageant journey. Here are some girls who are willing to temporarily exchange their corporate attire for swimsuits for a chance to represent the country in Miss World.

Carina Jennah Aguilar (#24) is a finalist in Miss Cavite 2014. Off the pageant stage, she works as a customer service representative.

Grace Ann Bautista (#10), Kimberly Pajares (#17) and Abegail Galisim (#22) are all licensed nurses. Grace Ann is a former analyst and claims processor and recently competed in Miss Quezon City pageant. Balanga, Bataan native Kimberly was second runner-up in Miss Casino Filipino 2012 while Abegail was a finalist in Miss FTV Philippines in 2006. 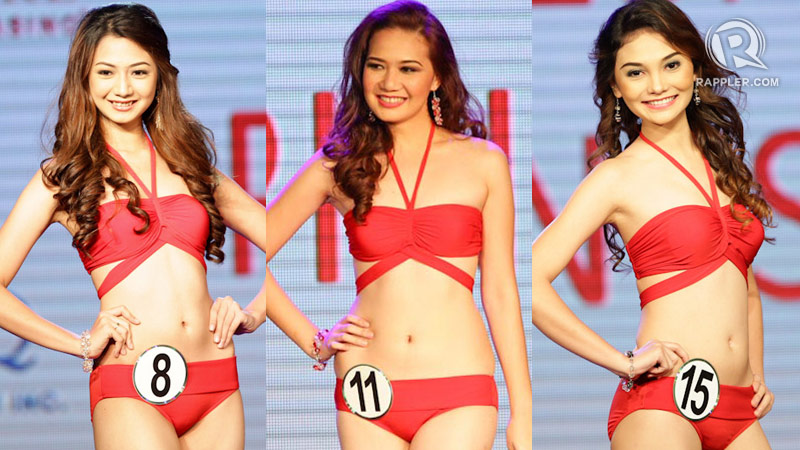 Prior to joining MWP, these girls were once named their campuses’ prettiest girls.

Moriel Olea (#11), is a psychology graduate from the Polytechnic University of the Philippines. This 24-year-old account officer from Tanauan, Batangas was crowned Miss PUP 2007.

Rachelle Emmylou Carandang (#8), the youngest contestant in the batch at 17, is a customs administration student in Lyceum of the Philippines University-Batangas. 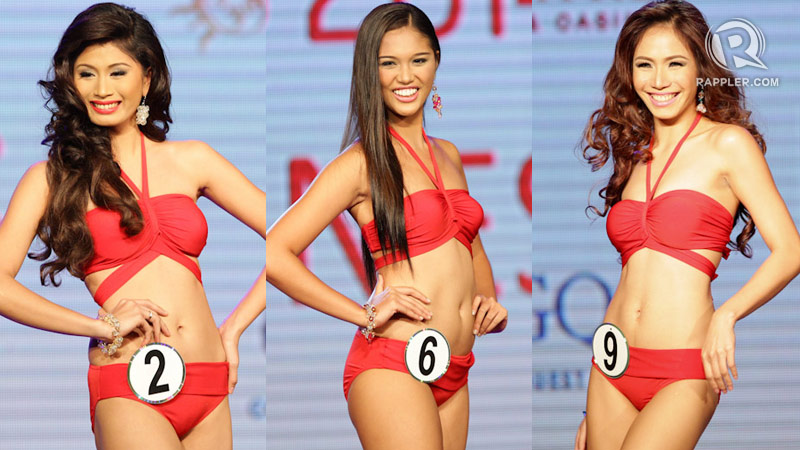 Pageants never run out of veterans from the grassroots level. Experience surely made these girls more than prepared to battle it out at the national level. 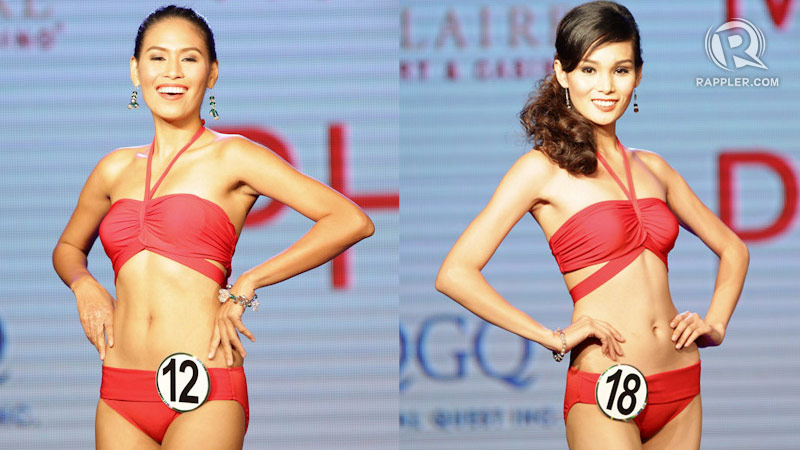 The Top Model category is among the major competitions in Miss World. Last year, Megan was the first Filipina to win this fast track event.

This year, two candidates are banking on their catwalk skills in hopes of gracing the Miss World runway.

Christine Balaguer (#12) made heads turn when she introduced herself in sign language during the press presentation. Her hearing impairment didn’t hinder her from making a name in the modeling industry. She works for Elite Model Management and is a member of RCP Sea Dragons Paddler dragon boat team. She is also into swimming and soccer.

Meanwhile, 21-year-old Ruffa Nava (#18) was included in Cosmopolitan Magazine’s 8 sexiest models list in the country last November. Early this year, she joined Miss Makati 2014 where she placed in the Top 10 and won Miss Photogenic.

Who among these girls will earn the right to represent the Philippines in the Miss World finals in December? We’ll find out on October 12.

All photos by Mark Cristino 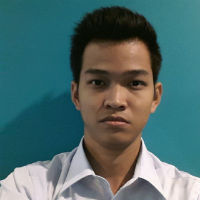