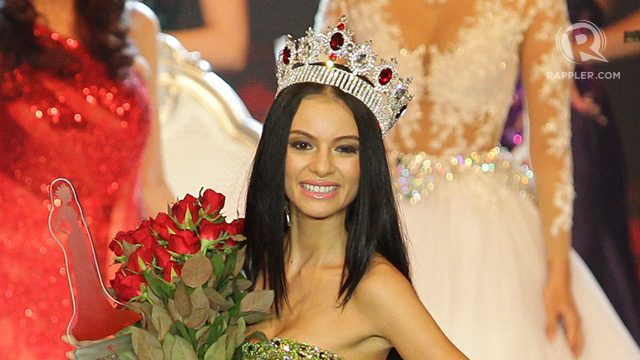 MANILA, Philippines – Valerie Weigmann has won the title of Miss World Philippines 2014, receiving the title that was given to actress Megan Young last year. Coronation night was on Sunday, October 12 at the Mall of Asia Arena.

Rounding out the top 5 were:

Valerie will compete for the Miss World title in December, with considerable pressure to deliver a back-to-back title. Megan was the first Filipino to win the title, doing so in 2013.

During the question and answer portion, when asked why Valerie felt she should win the title, she said: “I try to live my life in relation to others, by putting myself into other people’s shoes. I believe in the importance of empathy and compassion because I see if all of us can come together and work as one we can all be advocates of change. And I want to inspire and encourage everyone to take up a personal advocacy such as my own…because I believe it is truly in giving that makes us beautiful.”

Valerie had been an early favorite, winning the special award Miss World CamSur at the mini-pageant held in Camarines Sur last September. She also won a host of other awards during coronation night. She previously said that working with her advocacy Musikaramay is really what made her decide to join – and she was equipped to do so, given her showbiz background. “For me it was a very big decision of course. Because I was thinking it through over the years actually of me experiencing modeling and showbiz at the same time,” she said.

Janine Gutierrez, Mikael Daez, Tim Yap, and Gwen Ruais were on hand to host the show.

This year’s celebrations seemed to kick it up a notch, with the Philippine Army and Navy also making an appearance. And of course, the crowd went wild when Megan arrived to give one of her last speeches as Miss World.

It was, after all, an emotional evening not only for the winner, but also for Megan.

“I have the honor to stand before you tonight as the first Filipina Miss World,” she told the crowd at the beginning of the show, beaming.

Earlier, Megan addressed rumors that her reign was being extended by the Miss World organization, clarfiying that she would continue to do work with them, not as Miss World, but as Megan. – Rappler.com