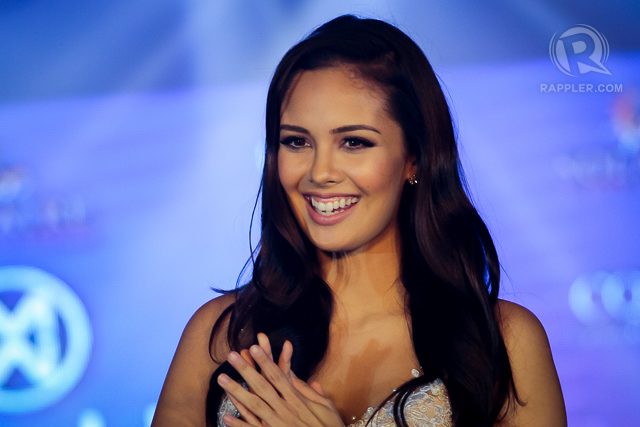 Facebook Twitter Copy URL
Copied
'What you see in Miss World today is totally different from what Miss World was before...From girls parading in bikinis, you now have ladies bringing in their own projects...to present at the Miss World competition,' says Megan

MANILA, Philippines – In a few days, reigning Miss World, the Philippines’ own Megan Young, will crown her successor at the pageant’s coronation night in London. Until then, she continues with her Miss World duties as her reign draws to a close, assisting with pre-pageant activities and making key appearances at events – including the most recent Oxford Debate held at the prestigious Oxford University. (READ: Megan Young clarifies ‘extended’ work with Miss World)

Megan gave the opening speech at the event, which gives the ladies a chance to talk about different issues in relation to the candidates’ various Beauty With A Purpose projects.

In her speech, Megan, who was already a well-known image model and TV personality before she became Miss World, talked about the initial hesitation to join beauty pageants, then the journey to discovering her own purpose within the context of a powerful cause.

Notably, she spoke about her harrowing trip to Haiti, where she was involved in an accident when the floor she was standing on collapsed. Megan was unhurt, but the accident put things into perspective for her.

Megan also spoke about the devastation wrought by typhoon Yolanda (international name: Haiyan), mere weeks after she won the Miss World crown. Connecting the renewed sense of purpose she felt to those of the fellow Miss World candidates’, she urged the audience to listen to what the ladies had to say with open minds and hearts.

View the transcript of the full 5-minute speech below.

“If you asked me to join a beauty contest 3 years ago, my answer would have been ‘no.’ I just could not see myself in the shoes of those girls onstage. I would have been terrified. But something completely just changed my decision around. What you see in Miss World today is totally different from what Miss World was before.

From girls parading in bikinis, you now have ladies bringing in their own projects from each of their own countries to present at the Miss World competition. I’ve had the opportunity to go to many countries this year, and it has opened my eyes to what Miss World can bring to the table.

This year, we visited Haiti and it was a very memorable trip for me. We were going to Haiti as a trip to see the 5-year project that we had been doing there. And the organizer told me, ‘Let’s go to this orphanage as a visit. I want you to see the kids whose home had been displaced during the earthquake.’ As soon as you enter the compound, all you see is a makeshift building. They don’t have a proper home. This is where they sleep, this is where they eat, this is where they study.

It was such a frightening experience for me because as my first duty as Miss World, I’m in an accident. And that is frightening. And I think to myself, what have I gotten myself into? What am I doing?

“What you see in Miss World today is totally different from what Miss World was before.”

What if we hadn’t been there at that time? What if this accident happened without people to help these kids? So many questions started going through my mind. And then I thought, ‘I’m here for a reason. I shouldn’t doubt why I’m here. I had been put in this position because I am meant to be here, to do something useful.’ Somehow I try to think that I was in the right place at exactly the right time.

Six weeks after I won Miss World, typhoon Haiyan happened in the Philippines. It was then that I realized what my purpose really was. Maybe my mind was meant to be changed to do better. Maybe I was supposed to be in this position to raise awareness for my countrymen.

And so what we did was, we went around the world, and we raised that awareness, we raised that money. And I’m proud to say that we were able to raise over two million dollars for those that were devastated by typhoon Haiyan. And that is the power, and that is the voice that I know that I have as Miss World.

And this is why we have all these contestants here today. This is why we have Miss World. This is the essence of Miss World. It is reaching out to the people who have that capability to give back to their communities. It’s raising that awareness and making sure that these people are given that opportunity. And I believe that is my purpose and that is these girls’ purposes as well.

So today I hope that you listen to them with an open mind and an open heart. Because these girls work so hard in making sure that their awareness or whatever project that they have is known throughout the world.

They want to make sure that they do so much for their community, for their country, for their neighbors, their brothers, their sisters, whoever that they can help, they are helping someone. And they want to reach that out to you so that you can help them as well. Thank you, ladies and gentlemen.”