Facebook Twitter Copy URL
Copied
The talibong is referred to as the 'Aklan sword,' which somehow elevates it to the battlefield and armory beyond the bangerrahan and the kusina

The binangon, or bolo, is the all-around utility blade that can be found in practically all Filipino homes. It is commonly used for opening coconuts, cropping shrubs and firewood, slicing meats, chopping bones, or even as a can opener. Several towns in Panay provinces – Iloilo, Aklan, Antique, and Capiz – are known for their skill in metalsmithing and bolo-making. I rarely gave bolos a second look, until I saw the coffee table book A Warrior’s Armament and Ornament – the Edwin R. Bautista Collection of Philippine Bladed Weapons (Museo ng Kaalamang Katutubo [MUSKKAT], 2020). 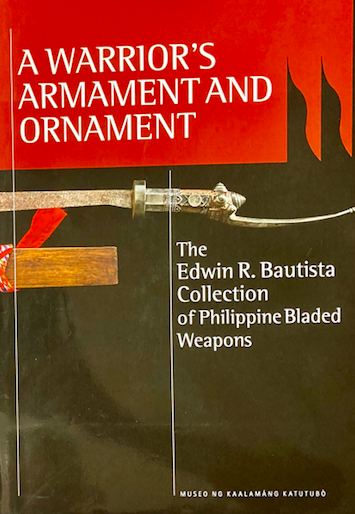 The book showcases the personal collection acquired by Ilonggo born-and-bred Bautista, an engineer who serves as UnionBank’s top honcho. He tells of his fascination with the blades and the collector’s journey, starting out with a gift from his Lolo; that talibong was a gift from a Panay Bukidnon chief whom his grandfather befriended during the Japanese Occupation.

The book boasts several scholarly yet fascinating pieces by top Pinoy weapon collectors and curators – Patrick Flores, Eusebio Dizon, Lorenz Lasco, Narciso Tan, Corazon Alvina. Far from being plain, unadorned, and utilitarian, the 163 pieces in the Bautista collection are works of art, and symbols of status, power, and influence. Lasco describes the talibong as having a pommel with either a figural deity with a long “chula” (a Sanskrit-Malayan word indicating a figural mystical horn) or another stylized figural deity. Bautista also traces the Hindu-South Thailand-Bornean Datu-Panay Bukidnon connections through the pieces in his collection – and thus portraying them as cultural symbols and artifacts of note.

So, with that in mind, I re-visited displays of these weapons at several places —the Philippine Economic History Museum, the Museo Iloilo, and the Museum of Aklan. The Museums have a few talibongs in their displays, as part of the native crafts section or as weaponry of the Panay Bukidnon (upland minorities).  However, the way they are displayed, the lighting, and curatorial information is sparse.

Early books have described the weapons. In 1904, Emily Bronson Conger, who spent several months in Iloilo where her son, an official in the US occupation forces, was assigned, wrote in An Ohio Woman in the Philippines about the uses of bolos, including as lethal weapons used by independence fighters against the American soldiers:

“Bolos are of all sizes and shapes and are made of steel or iron. Some are of the size and pattern of an old-fashioned corn cutter, handles of carved wood or carabao horn; sometimes made with a fork-like tip and waved with saw teeth edge. It is an indispensable tool in war and peace. There were none so poor as not to have a bolo…. They must get a great deal of silver, as they have so many silver articles; they insert bits of silver in the handles of bolos. These bolos are used for everything. […]” One day I found that my little tin oven was all worn out. I was in despair for there was no way of getting it repaired. My native cook watched me as I gazed at it sorrowfully; without saying a word he took a tin can and constructed a lining with metal cleats to hold the shelves up. The only tool he used was his bolo, about two feet long…“

Conger also relates an archaic use for the bolo: “I noticed he had great long finger nails; I told him he would have to cut them off. He said, ‘Without them I wouldn’t have something to scratch myself with.’  But on my insistence he took his bolo, placed his fingers on a block of wood, and severed his fingernails…. They use these bolos for cutting grass, cutting meat, and even on our soldiers, as we learned to our grief and wrath…

John Foreman an English geographer, writing in 1906, described and included photos of Bowie-knives, bolos, talibons (sic) and native weapons in The Philippine Islands / A Political, Geographical, Ethnographical, Social and Commercial History of the Philippine Archipelago, Embracing the Whole Period of Spanish Rule.

Emmanuel Soviet Russia de la Cruz writes about talibongs as weapons, that they were used by coastal communities to defend themselves against raiders. Centuries later it was the standard weapon for the local freedom fighters against the Spanish. Talibongs were the secondary weapon of guerrillas during World War II, clashing with Japanese samurai in hand to hand combat. They were carried by the army soldiers from Aklan who were part of the Philippine Army contingent to the UN forces during the Korean war in the 1950s.

Since 2014, Aklan has organized the annual Talibong festival, which aims to support and encourage blacksmiths and artisans involved in the craft and further hone their skills; serve as a marketing and business venue where they can offer their products to the public; and serve to recall history and preserve culture and traditions. The talibong is referred to as the “Aklan sword,” which somehow elevates it to the battlefield and armory beyond the bangerrahan and the kusina.

Tahum at Talum – on display at the UPV Museum

At the UPV museum is an ongoing exhibit, “Tahum at Talum” (Beauty and Sharpness) that displays 30 of the Aklan talibongs, from the collection of De la Cruz, who conceptualized and pushed for the Talibong festival. Curator Martin Genodepa notes that “binangon” appears to be a generic term for blades produced in Panay, but due to cultural intermingling, variant terms evolved, basically determined by their function, which also dictates the shape of the blade. Siantong, sanduko, ginunting, itak, kalis, sundang, and talibong are the terms for these variants and are generally interchangeable. However, in the mountainous areas of Panay, the blade that is carried by the owner as a personal weapon and carried for protection as well as a status symbol is widely known as talibong.

According to Genodepa, what makes the talibongs special is the artistry that goes into crafting its shape or form. The talibong blade has four traditional shapes. Artistry also goes into the making of the sheath or scrabbard, as well as the handle. The sheath can be pointed, rounded, or upturned, or shaped like the tail of a fish; it is made from native wood varieties then bound together by leather, braided abaca fiber or nito vine. The sheath may be inlaid with decorative carvings, metals, coins, snakeskin, or even mother of pearl. The hilt, or handle, is carved from carabao horn – or in some cases, bone, and can be inscribed with symbols, derived from local lore – the head of a wild cat (musang), rooster’s belly (tinikeon), head of a beetle (binangag), or a dragon’s head (bakunawa). Two hilts on display are carved from the horn of an albino carabaos, giving it a lighter, ebony-like sheen.

The exhibit has a diagram of talibong parts and the local terms used.  An informative video shows how the blacksmithing works are carried out – usually the metal is from scrap vehicle suspension leaf springs (Muelle).  It shows all stages: cutting, forming shape, size, firing, cleaning, smoothing, hardening the cutting edge, and sharpening, up to forming the handles and carving the sheath.

But back to the book – it is indeed a singular publication, perhaps the most comprehensive description and illustration of Philippine bladed weapons. It would not be inaccurate to call the 218-page publication as THE bible on Philippine bladed weapons. This book literally whets the appetite to see the collection in person – which was generously donated to MUSKKAT by Bautista. To imagine the glint of cold steel, admire their beauty and artistry, and the skill of the makers. The total black background of the photos allows the artistry of the talibongs to shine through, and the close-ups reveal, in intimate and luxurious detail, both design and crafting that is a delight to behold.

Photos below are from “Tahum kag Talum,” running until January 31, at the Lantip Gallery of UPV: 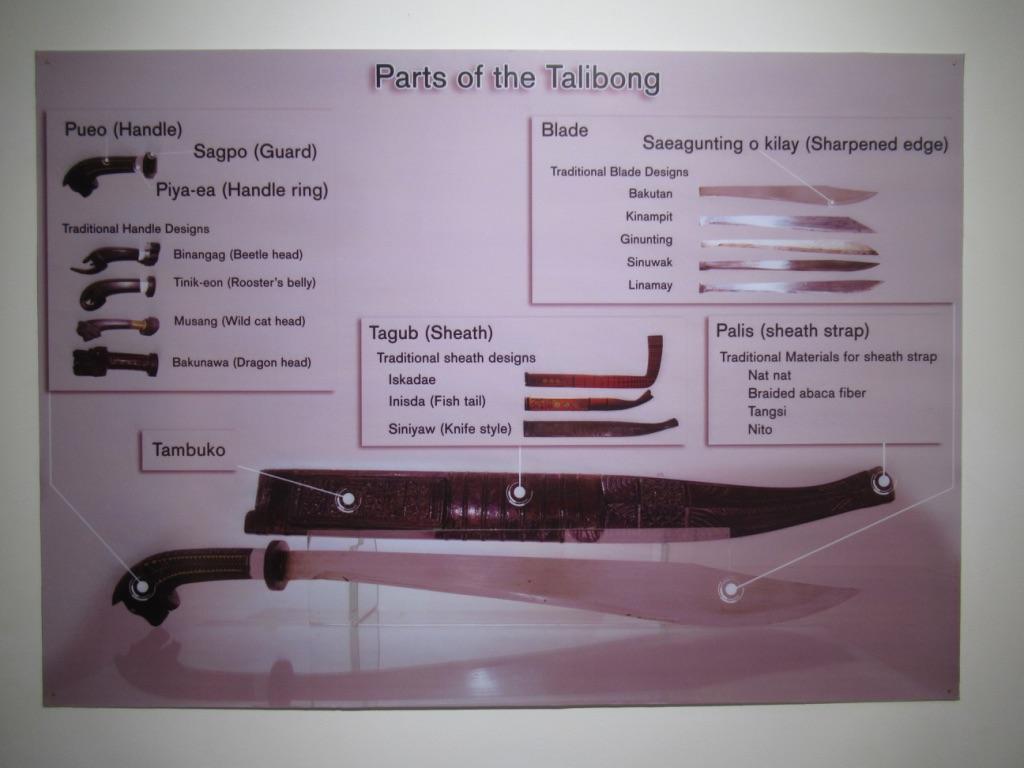 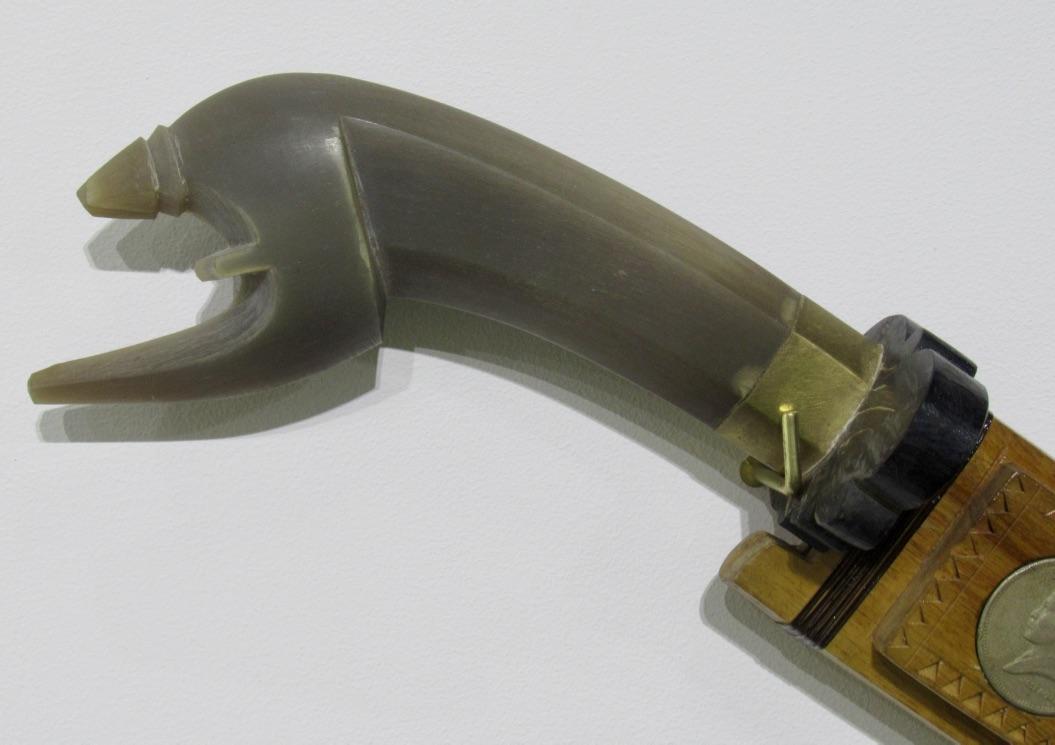 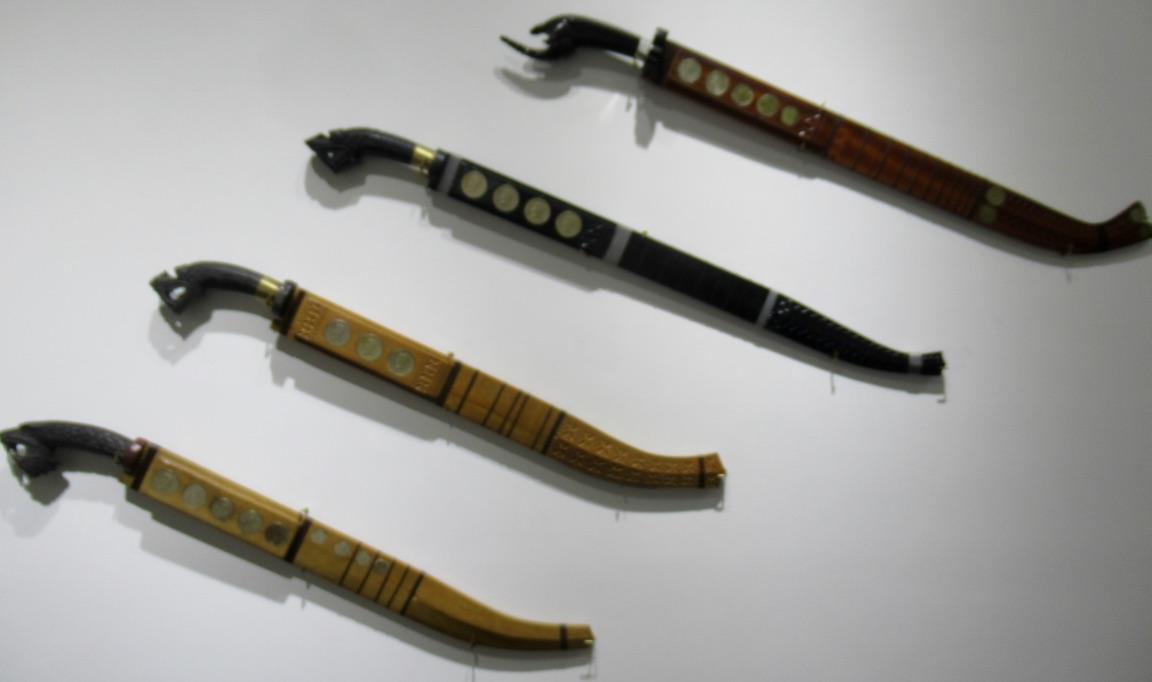