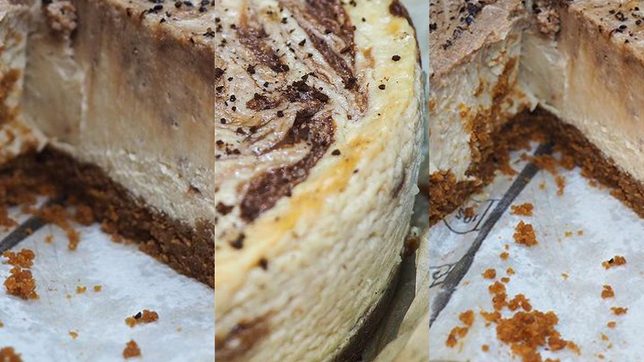 There’s no need to pair that cheesecake slice with a cup of coffee anymore, because here’s a decadent combo you’ll want to espresso your love for: espresso cheesecake, made by home bakery 105 D Street.

105 D Street owner Roy Menorca and his wife thought of combining their love for cheesecake and their best-selling coffee crumble cookie at an affordable price – all of their homemade cheesecakes cost under P1,000.

Filipinos love their local coffee, so the Menorcas decided to capitalize on this, highlighting local beans from 18 Days Coffee by the Basilio coffee group in their cheesecake. Roy, who has been ordering his coffee from them for over a decade, decided to use their espresso for 105 D Street’s latest coffee-infused dessert.

“Espresso is the best way to get a powerful coffee taste with the least amount of water in the cake. It’s very fortunate that I got into coffee some years ago, so we’re able to do these things. We also consulted a barista friend in Cebu to get the espresso shots right,” Roy told Rappler.

105 D Street’s cheesecake is soft, creamy, and tangy, like a good New York-style cheesecake. The graham crust is buttery but not too thick, giving the espresso and cream cheese equal chances to shine.

“This is the item in our menu that required the most experimenting. We tried several ways to infuse the cheesecake with coffee: instant coffee, steeping coffee beans in some of the ingredients, drip coffee. But in the end, espresso shots won,” Roy said.

“It delivered the coffee taste in the smoothest and most ‘whole’ way. It also left a lingering taste in the mouth, unlike instant coffee which gives you that coffee hit right away but goes away quickly and could be a little acidic,” he added.

Considering the moderate strength of the coffee’s flavor, there is no acidic aftertaste present – the brew is smooth, balanced, and not overpowering.

“We added the couverture milk chocolate swirls (technically, they’re mocha swirls since those are also mixed with coffee batter) to break the monotony of the cake. So the espresso cheesecake has four layers: two layers of coffee batter, two layers of mocha swirl. We alternate the layers so you get pockets of chocolate throughout the cake,” he added.

The skillful layering is probably why this cheesecake has no umay factor – you get a variety of flavors (sweet, tangy, coffee) in every indulgent bite. Also, it’s gluten-free!

“All our cheesecakes do not have flour in the batter, so they’re primarily held together by fat, acid, and heat from the bake. We found that this was a key detail for those who couldn’t tolerate gluten well,” Roy said.

Roy and his wife run the small home-based business together alongside their respective day jobs. 105 D Street, which was founded in October 2020, started off with just the self-taught bakers’ homemade cookies.

Months later, the couple moved on to cheesecakes, starting with their best-selling honey brie cheesecake, topped with spiced candied walnuts and honey, and the dark chocolate brie cheesecake. Both are made with premium brie, so you’ll definitely pick up on the sharp aftertaste of real cheese.

105 D Street is based in Pilar Village, Las Piñas City. They operate on a strictly pre-order basis, with limited delivery slots per day. They can cater to deliveries around Metro Manila and in Cainta, Antipolo, Taytay, Marikina, Commonwealth, Fairview, Bacoor, Silang, Calamba, and General Trias.