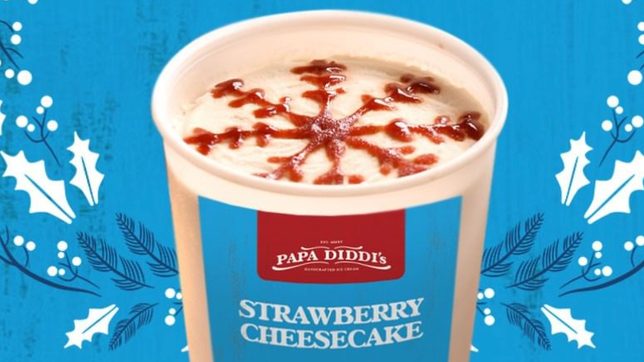 Combine three of your favorite things – strawberries, cheesecake, and ice cream – into one dessert, and you’ve got artisanal ice cream shop Papa Diddi’s newest flavor for the holidays: the Strawberry Cheesecake Pint!

In a pint you get tangy-sweet, cheesecake-flavored ice cream, which almost tastes like the real thing; bits of graham crust for slight texture; and a refreshingly fruity strawberry purée drizzled on top to form an adorable Christmas star. It costs P350 for a pint.

The two limited edition flavors are available for the whole month of December. You can get them for takeout from Papa Diddi’s stores in Maginhawa, Eastwood, Poblacion, SM North EDSA, and Loyola Heights. They’re also available via delivery – just check out Papa Diddi’s website and place your orders from 10 am to 9 pm daily. – Rappler.com

Berry good food deals are in foodpanda now! Don’t forget to use these coupon codes.

Fried chicken…ice cream?! Get a bucket of this novelty treat from Pasig City

Get brazo de mercedes ice cream from this local shop