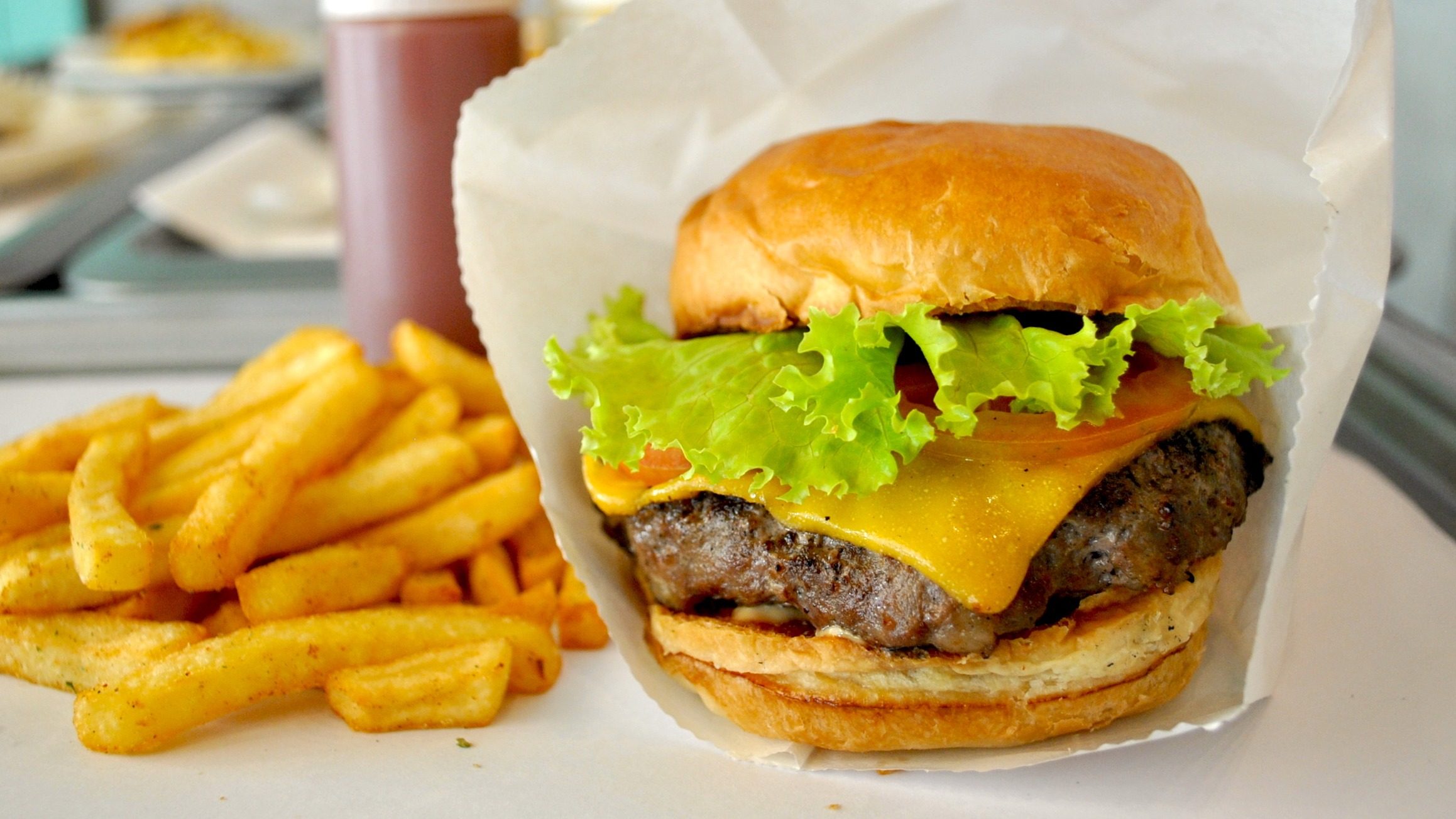 There’s nothing quite like sinking your teeth into a big, juicy, good ‘ol burger – crisp veggies, melted cheese, soft buns, and meat juice spilling down your chin included.

There’s also nothing quite like discovering one of the best burgers you can lay your hands on, quietly hidden in the most random of places: Petron Katipunan, one of the residential area’s busiest gas stations.

POPS Beyond Better Burgers is located close to Ateneo De Manila University, Miriam College, U.P. Diliman, and a few subdivisions. The self-proclaimed “community diner” is exactly that – a small neighborhood space serving big burgers (and more!) to families, students, and friends, ready to fill up your appetite just after you’ve filled up that gas tank.

The owners of POPS, 3 young sisters, wanted the pioneer branch beside the village they live in to keep their vision of a “true-blue community” alive. Both parents help out with the operations, with one of them being – you guessed it – Pops.

“When people come in, most of the time, we know them already. We really want that connection. They’re guests, not just customers and transactions. We want to connect with them,” he added. And so far, so good.

When I dropped by for a visit, groups of students quickly filed in after school, casually conversing with Pops, who is often there helming the cash register and helping out indecisive guests with their orders.

Because it’s community-driven, word of mouth spreads quickly among neighbors and friends – and luckily, for POPS, mostly only glowing reviews are circulated. With this, happy tummies return, bringing along new guests curious to try these “beyond better burgers” raved about by their peers.

The place is cozy, homey, and pleasant, with seating fit for groups and interiors made from repurposed, recycled materials, designed by one of the 3 sisters.

POPS is proof that some secrets deserve to be unearthed – starting with the star of the show: POPS’ burgers.

I’ve tried most of the city’s more known burger brands – some foreign, some local, some mediocre, over-priced, and some agreeably yum – and POPS easily bags a spot in my top 3.

It’s everything you need in a burger, which is… nothing much, really. Just fluffy buns, fresh lettuce, tomatoes, and a slice of melted cheddar cheese lovingly hugging the main attraction: POPS’ 100% angus 1/3 pound beef burger.

The made-to-order patty is flame-grilled until juicy but tender, made with no extenders and no preservatives – just salt and pepper, which brings out the flavor of pure, fresh angus in every bite.

IMO, that’s what when you know a burger is good – when its patty can stand proudly on its own. Plus, the price point isn’t steep at all. No wonder 60% of POPS’ sales comes from their burgers!

“I’m actually not a burger person, but my wife and daughters are. I tried so many formulas – they liked it, but I knew it wasn’t ‘it’ yet,” Pops shared.

Fast forward 20 years later, and Pops finally nailed it. “This is it. This is the burger we really love,” his daughters said.

With the burger its star, Pops built the rest of the menu around it.

Will it bring the boys to your yard? Let’s see, because POPS’ milkshakes (P99) could be better than yours. Made from ice cream, these creamy, rich shakes come in malt, chocolate, or strawberry flavors, and are the perfect sweet wash-down to a savory burger.

POPS’ fresh fruit shakes come in either coco lychee or mango, and taste just like the real thing – no artificial flavors here!

Sometimes, though, all you need is rice – and POPS’ Prime Time Roast Beef (P169) is the tasty ulam your carbs need.

The roast beef strips are flash-seared, cooked quickly over high heat, making each one lightly crisp around the edges but still tender. They’re tossed in a rich, savory gravy, which I couldn’t resist mixing into my rice.

Chicken, anyone? POPS’ Chicken Diva (P169) was a burst of cajun, spicy flavors in my mouth, thanks to the flame-grilled boneless chicken thigh seasoned with tongue-tingling spices.

Up to the challenge? Have it with POPS’ spicy rice, another best-selling side dish.

Chicken breast fillets are coated in breading, fried ’til crunchy, and then drizzled with a silky, homemade BBQ sauce. The light crunch drew me in but the juicy, tender chicken meat inside sealed the deal for me.

For pescetarians craving for some good ‘ol fish and chips, POPS’ The Codfather (P169) (excuse the pun) comes very close to the English classic.

Cod fish fillet is battered and fried until crispy-light, with its insides moist and flaky. It comes with your side of choice – of course, why shy from the fries – and a garlicky aioli dip.

Any of the meals can come with one or two sides of your liking – there are french fries (P99), mac and cheese, mac and meat, and a side salad to choose from.

Forget friends: Have burgers with benefits instead

The family behind POPS believes in their roles as stewards. The name POPS doesn’t just pertain to his role as a father, but also to the big man up there.

“It’s an offering also to Him, because at the end of the day, we don’t own anything anyway. It’s all his graces and blessings,” Pops said. With this core belief, POPS made sure that their business gave back – starting with their Burgers with Benefits program.

“We really wanted to give back, so part of the proceeds for every burger goes to a feeding program in Ateneo De Manila University,” Pops said, mentioning their future plans of partnering with an orphanage as well.

“Doing the right thing, that’s what we stand for.”

All spoons and forks are plant-based and made from cornstarch – no plastics allowed (except for the take-out drink lids.)

It’s a family-owned venture worth supporting, with intentions as pure as the angus meat their lip-smacking burgers are made of. So, if you find yourself along the Katipunan area and in search for a good burger fix, pop over at POPS. You won’t regret it! – Rappler.com