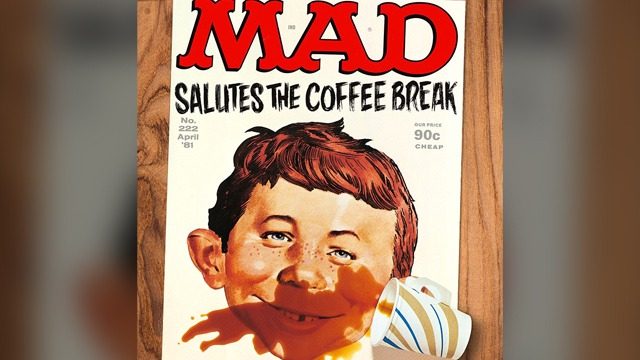 WASHINGTON, USA – MAD Magazine has amused and outraged readers for nearly 70 years but now it is being pulled from newsstands, triggering testimonials from comedians and cartoonists.

The rollicking satirical mag with its freckled, big-eared mascot Alfred E. Neuman will be published monthly with original satire only until September, its publisher DC Comics told ABC news on Thursday, July 4.

But “after issue #10 this fall there will no longer be new content – except for the end-of-year specials which will always be all new,” it said in a statement.

“So starting with issue #11 the magazine will feature classic, best-of and nostalgic content from the last 67 years.”

MAD, known for its adult humor and sharp political edge – was first published in 1952 and became a comic tour-de-force that influenced many well known satirists.

“I can’t begin to describe the impact it had on me as a young kid – it’s pretty much the reason I turned out weird. Goodbye to one of the all-time greatest American institutions.”

“Goodbye, Mad Magazine. Thanks for inspiring generations & generations of comedy & most of all, thanks for the laughs. There was a moment in so many of our childhoods where you were the greatest thing ever.”

The publication had more than two million subscribers at its high point in the early 1970s, but that plummeted to just 140,000 in 2017, wrote associate professor of communications Michael J. Socolow.

MAD got a shout out from President Donald Trump in May when he likened Pete Buttigieg – the young Midwest mayor running to be the Democratic candidate for president – to the magazine’s grinning figurehead.

But perhaps in a sign of the publication’s shrinking reach, the 37-year-old Buttigieg answered: “I’ll be honest, I had to Google that.”

“I guess it’s just a generational thing,” he added.

“I realize humor/media influenced by MAD outpaced MAD decades ago. So it goes. But I hope MAD publishes something someday with some new material. And I hope everyone involved lands on their feet.” – Rappler.com