More than a dozen cats and dogs vie for Maryam al-Balushi’s attention as she hands out treats on a bed in her home in Oman’s capital Muscat.

Despite complaints from neighbors and mounting expense, she has accumulated 480 cats and 12 dogs, describing her pets as a mood-lifter and better companions than her fellow humans.

“I find that animals, especially cats and dogs, are more faithful than humans,” she said as cats jumped on and off a nearby scratching pole. 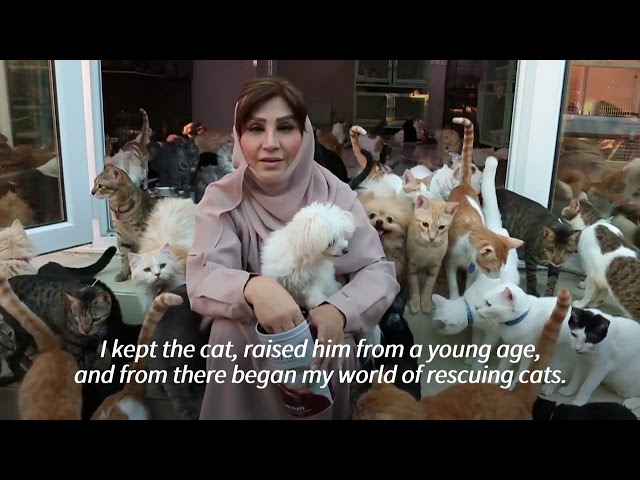 Orphaned at a young age, Balushi has grown her menagerie over the past decade, identifying with her furry friends, many of which were rescued from hard lives on the street.

Oman has seen an upswing in stray and abandoned animals in recent years, local media reports, despite penalties of $25 for dumping a pet.

Animal welfare activists have advocated a program of “trap, neuter, release” to bring down the number of strays.

Balushi spends about $7,800 monthly to care for the creatures, 17 of which are blind, diligently feeding and cleaning them as well as taking them to the veterinarian for medical attention.

Her home is now full of cages, with Balushi letting them out to exercise and play in rotation.

“It all began in 2008 when my son bought a small Persian cat,” said Balushi, 51, a retired civil servant, wearing a dusky pink abaya and immaculate makeup.

“Like many mothers, I refused to look after it as I did not like animals and my son did not pay it much attention or look after its hygiene.”

But two years later Balushi found herself looking after another cat and her approach was transformed.

“I found myself totally immersed. I took care of her entirely, feeding her, bathing her, and spending a lot of time with her,” she said.

Word spread about Balushi’s new-found love of animals and departing expatriates would leave their pets on her doorstep while animal shelters would re-settle their charges with her.

After buying her own home in 2014 following complaints about her growing collection, she was able to take on more animals.

Balushi was inspired by a former neighbor who used to feed strays with household scraps.

She says her impressive collection of cats and dogs has helped her stave off depression – as well as earning her an impressive following on Instagram.

“I was in a dark place and they were the lifeline that rescued me,” she said. – Rappler.com