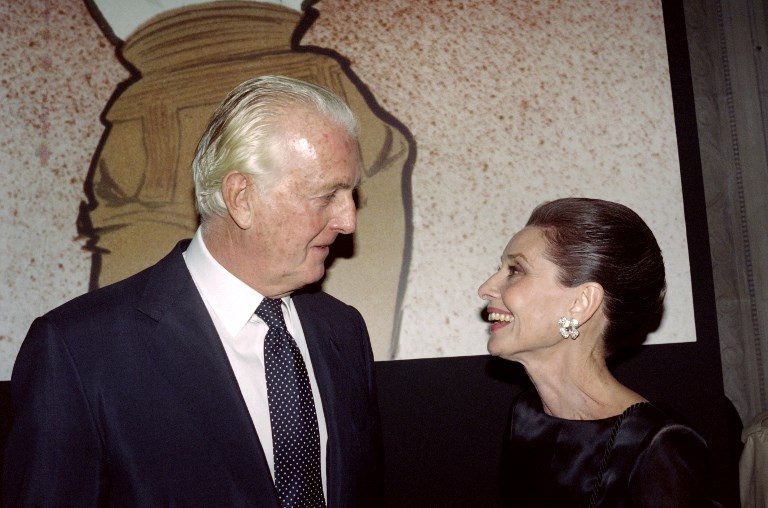 PARIS, France –Theirs was one of the most beautiful friendships in fashion history – yet the life-long partnership between the film star Audrey Hepburn and the fashion designer Hubert de Givenchy almost never happened.

The aristocratic French creator, whose death at 91 was announced Monday, March 12 at first refused to dress the young Belgian-born actress when they met in 1953, he told Agence France-Presse.

Only when she took him to dinner and charmed him, did he relent.

“When Audrey came to me to ask me to make her dresses for the film Sabrina, I didn’t know who she was and I thought she was Katharine Hepburn,” he said.

“Then she arrived, so graceful, young and bubbly and dressed like a young girl would be today,” he said of her two years ago as an exhibition about their friendship, To Audrey with love, opened in the Dutch capital, The Hague.

“She was wearing cotton trousers, ballerinas and a T-shirt revealing her belly button, with a Venetian gondolier hat in her hand,” he recalled.

Having only launched his own label the previous year, “I was in no position to take on such a big wardrobe for Sabrina and I told her that I couldn’t dress her,” saying that he did not have enough “petites mains” seamstresses in his studio.

But Hepburn would not take no for an answer, and invited him to dinner, “which was a really surprising thing for a young well-brought-up woman to do in those days.”

Then over the course of the meal, Givenchy, who was only two years her senior, fell under her charm and he ended up asking her to drop round to his Paris studio the next morning.

“She persuaded me and how wise I was to accept,” Givenchy told AFP.

Opposite Humphrey Bogart and William Holden in Sabrina Hepburn wore a Givenchy ivory ball gown with black embroidered flowers that has gone down in film history.

From then on she asked the designer to make all the clothes for her films, and in 1954, the year Sabrina was released, she wore one of Givenchy’s dresses to accept her best actress Oscar for Roman Holiday.

“Audrey’s style came with a really different silhouette, really of the moment,” Givenchy said of his muse, who he dressed right up to her death in 1993.

Their friendship was based on much more than clothes, however, and Givenchy said he never tried persuade her to wear anything other than “what she liked and what she could wear.”

“His are the only clothes in which I am myself. He is far more than a couturier, he is a creator of personality,” Hepburn once said of her friend, who was at her bedside at the end of her life in Switzerland.

In those final days he gave her a navy quilted coat, telling her, “When you are unhappy, wear this and it will give you courage.” –Rappler.com