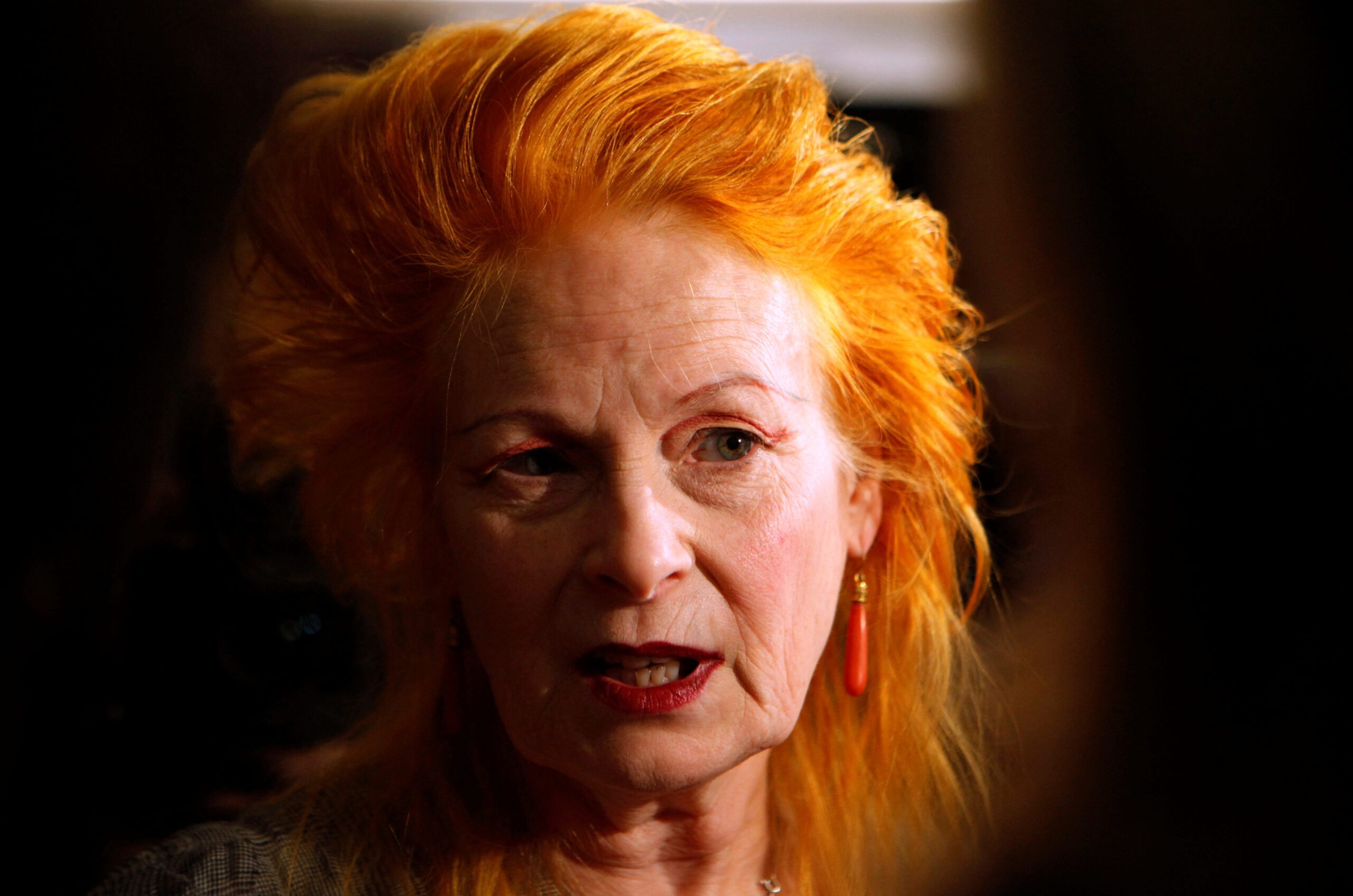 Fashion designer Vivienne Westwood talks to a journalist before the presentation of her 2011 Spring/Summer collection at the London Fashion Week September 19, 2010.

LONDON, United Kingdom – As the person who dressed the Sex Pistols, Vivienne Westwood, who died on Thursday at the age of 81, was synonymous with 1970s punk rock, a rebelliousness that remained the hallmark of an unapologetically political designer who became one of British fashion’s biggest names. “Vivienne Westwood died today, peacefully and surrounded by her family, in Clapham, South London. The world needs people like Vivienne to make a change for the better,” her fashion house said on Twitter.

Climate change, pollution, and her support for WikiLeaks founder Julian Assange were all fodder for protest T-shirts or banners carried by her models on the runway.

She dressed up as then-prime minister Margaret Thatcher for a magazine cover in 1989 and drove a white tank near the country home of a later British leader, David Cameron, to protest against fracking.

The rebel was inducted into Britain’s establishment in 1992 by Queen Elizabeth who awarded her the Order of the British Empire medal. But, ever keen to shock, Westwood turned up at Buckingham Palace without underwear – a fact she proved to photographers by a revealing twirl of her skirt.

“The only reason I am in fashion is to destroy the word ‘conformity’,” Westwood said in her 2014 biography. “Nothing is interesting to me unless it’s got that element.”

Instantly recognizable with her orange or white hair, Westwood first made a name for herself in punk fashion in 1970s London, dressing the punk rock band that defined the genre.

Together with the Sex Pistols’ manager, Malcolm McLaren, she defied the hippie trends of the time to sell rock’n’roll-inspired clothing.

They moved on to torn outfits adorned with chains as well as latex and fetish pieces that they sold at their shop in London’s King’s Road variously called “Let It Rock”, “Sex,” and “Seditionaries”, among other names.

They used prints of swastikas, naked breasts and, perhaps most well-known, an image of the queen with a safety pin through her lips. Favourite items included sleeveless black T-shirts, studded, with zips, safety pins, or bleached chicken bones.

“There was no punk before me and Malcolm,” Westwood said in the biography. “And the other thing you should know about punk too: it was a total blast.”

Born Vivienne Isabel Swire on April 8, 1941 in the English Midlands town of Glossop, Westwood grew up at a time of rationing during and after World War Two.

A recycling mentality pervaded her work, and she repeatedly told fashionistas to “choose well” and “buy less”. From the late 1960s, she lived in a small flat in south London for some 30 years and cycled to work.

When she was a teenager, her parents, a greengrocer and a cotton weaver, moved the family to north London where she studied jewelry-making and silversmithing before re-training as a teacher.

While she taught at a primary school, she met her first husband, Derek Westwood, marrying him in a homemade dress. Their son Ben was born in 1963, and the couple divorced in 1966.

Now a single mother, Westwood was selling jewelry on London’s Portobello Road when she met art student McLaren who would go on to be her partner romantically and professionally. They had a son, Joe Corre, co-founder of lingerie brand Agent Provocateur.

After the Sex Pistols split, the two held their first catwalk show in 1981, presenting a “new romantic” look of African-style patterns, buccaneer trousers, and sashes.

Westwood, by then in her forties, began to slowly forge her own path in fashion, eventually separating from McLaren in the early 1980s.

Her 1985 “Mini-Crini” line introduced her short puffed skirt and a more fitted silhouette. Her sky-high platform shoes garnered worldwide attention in 1993 when model Naomi Campbell stumbled on the catwalk in a pair.

“My clothes have a story. They have an identity. They have character and a purpose,” Westwood said.

“That’s why they become classics. Because they keep on telling a story. They are still telling it.”

The Westwood brand flourished in the 1990s, with fashionistas flocking to her runway shows in Paris, and stores opening around the world selling her lines, accessories, and perfumes.

She met her second husband, Andreas Kronthaler, teaching fashion in Vienna. They married in 1993 and he later became her creative partner.

Westwood used her public profile to champion issues including nuclear disarmament and to protest against anti-terrorism laws and government spending policies that hit the poor. She held a large “climate revolution” banner at the 2012 Paralympics closing ceremony in London, and frequently turned her models into catwalk eco-warriors.