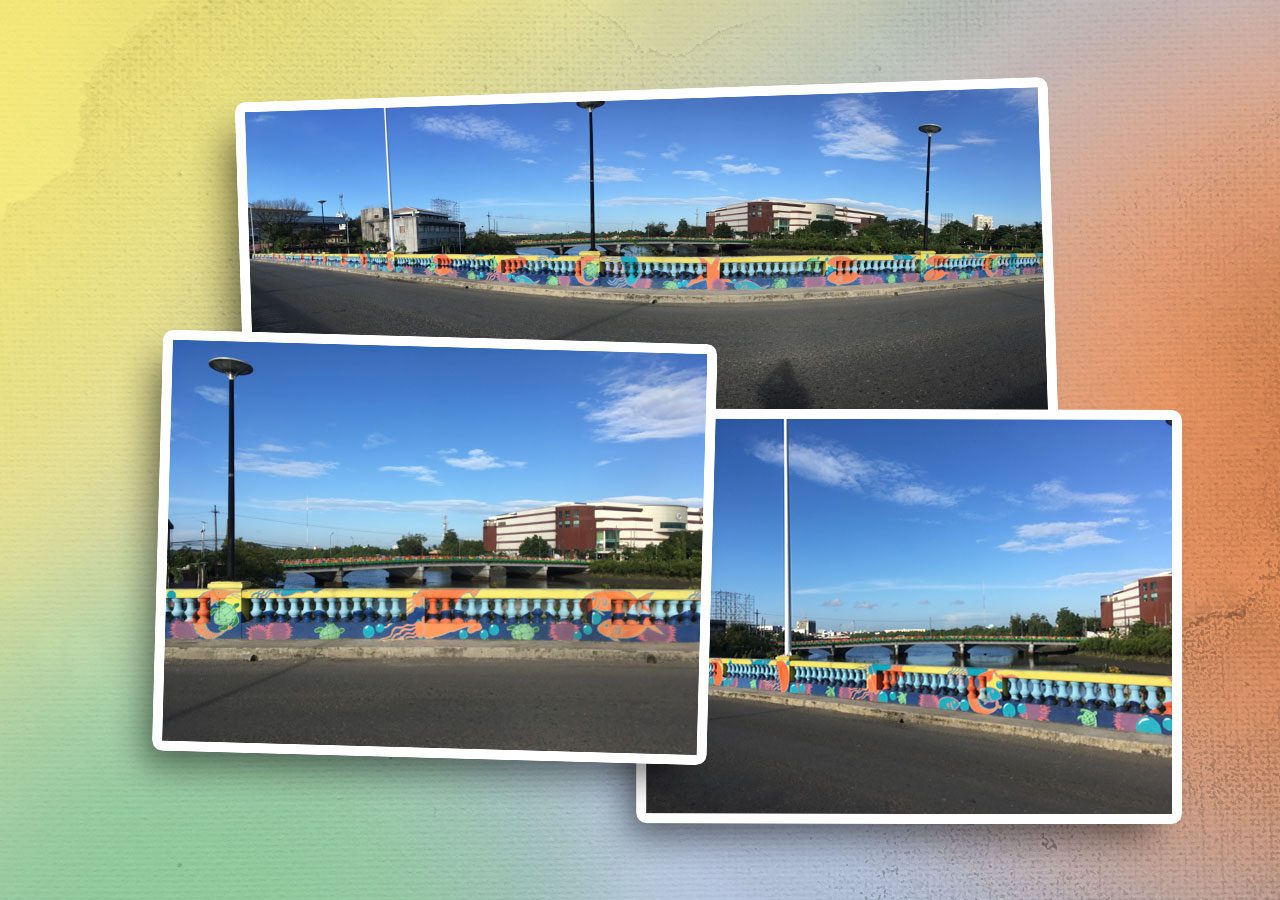 Facebook Twitter Copy URL
Copied
Plus, here are some suggestions for how the Esplanades can be maximized!

The Esplanades of Iloilo City, a multi-awarded 10-kilometer “linear park,” runs alongside the Iloilo River and some tributaries, meandering through five city districts: Molo, Mandurriao, La Paz, Lapuz, and the City proper. Now numbering nine distinct sections, the Esplanades serve as a flood control/drainage system, mangrove sanctuary, and a landscaped park with its own bike lanes, walkways, and favorite spots for fishing and boating. Bridges traverse the river, connecting Esplanade sections and present-day Iloilo City to areas once merely known as tabukan (crossings).

Prior to 2008, when there was not an inkling of what today’s Esplanades might look like, there were just four bridges crossing the river: Carpenter Bridge, Diversion Road/Iloilo Bridge, Forbes Bridge, and the Quirino Lopez Bridge. Today there are 11. It is possible to do a leisurely walk across all these bridges, from Esplanade 1 to 9, in about 1.5 to 2 hours.

Signaling the start of the Esplanades are the old and the new Carpenter Bridges (#1 & #2) in Molo. These connect Esplanades 1 and 2. The old one was built during the early American era and named after a former executive secretary, Frank Watson Carpenter, an able administrator and first civilian governor of the Moro provinces, who introduced innovations in public works, budgeting, and local governance. The old bridge was pedestrianized, with benches installed, and is well-known now for Zumba classes. A sturdier two-lane bridge parallel to it was constructed for vehicles. From here one can see the expanse of mangroves going both east and west, and it also has an outstanding sunset view.

Walking along either Esplanade 1 or 2, after 1.25 kilometers, you reach Iloilo Bridge (#3, aka Diversion Road Bridge). This is an eight-lane bridge and a major artery of the city – one of the most gaily painted, lined by bougainvillea. It has a separate lane for cyclists delineated with planter boxes. There are wide sidewalks for walkers, separated from vehicles by semi-curved iron railings; these railings are a characteristic feature of all the Esplanade rails, and recall the river’s own wavelets and currents. There is an under-bridge walk you can pass through, but only during low tide. The bridge underside is broad enough to house dragon boats for race training.

The Esplanades are numbered sequentially, the odd numbers on your left, if you’re facing the direction of the city proper; the even numbers on the parallel side across the river. Continuing along Esplanade 1 Extension and the skate park, there are also two bridges, yet unnamed: the pedestrian bridge (#4), which connects the skate park to Esplanade 3, and the bridge on Efrain Treñas Avenue (#5). Both bridges are colorful and cross a tributary, the Dungon Creek. The creek was a busy thoroughfare during colonial times, connecting to the Jaro public market, even until the development of the Port of Iloilo in the late 1800s and early American era.

The pedestrian bridge between Esplanades 1 Extension and 3 is the latest addition and completes a circuit; it is gaudily painted with symbols of childhood games: jackstones, balls, kites, tires, loose spools, trumpo (spinning tops), upturned tin cans and stray slippers.  From here one can view the two other bridges and an expanse of mangroves.

Walking along the newly completed Esplanade 3, known also for the flower-laden and Instagram-worthy “Garden of Love,” you will reach the Jalandoni Bridge, (#6) which connects Barangay Nabitasan in Lapaz and General Luna/Jalandoni Streets. This bridge also has an under-bridge walk. You then continue along Esplanade 5, which like Esplanade 3, is lined with old-growth mangroves. Esplanade 5 is the least maintained of all the Esplanades — many guard rails are missing or rusting, and the walking path is uneven in many places. There are many informal settler houses across the street.

Towards the end is Forbes Bridge (#7), constructed in 1908 and named after William Cameron Forbes, the governor-general then. With its classic design and arched culverts, it is claimed to be the oldest concrete bridge in the country. It connects the City proper to the La Paz and Jaro districts, and is now painted with leaf-like designs. You can cross on both ends of the Forbes Bridge; the shortest length of the Esplanades is just beside the Water District’s building, just about 100 meters.

Esplanade 7 is opposite, in front of the Gaisano La Paz branch. From there you can cross on Rizal Bridge (#8), which used to be the former railway bridge. It was idle for two decades after the railway closed in 1989; later it was expanded to accommodate vehicles and has considerably eased traffic going from and coming to La Paz and Lapuz districts. Rizal Bridge is fancifully painted with species of marine life – jellyfish, sea turtles, corals, squid, seahorses, crustaceans, and sea urchins.

You’re now at the start of Muelle Loney, on Esplanade 8, and will see the provincial capitol on your right side. Walk on Esplanade 9, which is also popular with early morning fishers, and cross a short pedestrian bridge (#9) over a tributary of the river going to Lapuz district. From here one has the most majestic view of the city skyline, as far as the eye can see – in the distance, on a clear day are the mountains of Guimaras, the San Jose Placer Church dome and steeples, Freedom Grandstand, city hall, the Customs house, Grand Xing Hotel (for now the tallest building in the city proper), down to the provincial capitol, the National Museum-Western Visayas with its central glass dome, and a multi-level parking building that blends in with the other structures.

[OPINION | Ilonggo Notes] Want to be an #Esplanaddict? A half-kilometer away is the Quirino-Lopez Bridge (#10), which connects Lapuz district to the City proper; named after the former president Elpidio Quirino and Fernando Lopez, a three-term vice president and favored son of Iloilo. This is one bridge that yet has to be painted. About one kilometer ahead is the century-old Customs house (Aduana) which will soon be another museum, but before this, you can cross over Drilon Bridge (#11), which connects to the ferry terminals for Guimaras and Negros. At the end of this bridge is another landscaped park area, with a prominent “Uswag Iloilo” sign. This completes the walk through the 11 bridges traversing the Iloilo River and the Esplanades.

And while we’re on the subject of the Esplanades, here are some suggestions for how they can be maximized – as venues for leisure and learning, to promote the city’s attractions, and to support entrepreneurs. These will take it to another level, putting it at par with some of the best-known public parks and open spaces worldwide.

First, put up all-weather information boards – maps of all the Esplanades, roads and bridges, landmarks and attractions, even distances to certain points of interest. “You are here,” or even “Did you know?” signage can be posted, with engaging questions. A fine arts or architecture student group can do this.    At various points along the esplanades, one can put up illustrations or photos of migratory birds, fishes, plants, trees, and flowers, with scientific names, and common names in English and Ilonggo. Native tree species can be highlighted. More information about conservation, proper waste segregation and disposal, caring for the environment and the whole ecosystem can be added. Information about the different types of mangroves and their importance can be given; schools can assign students for observation and field trips along the area – to do something beyond TikTok videos. Make the whole of the Esplanades a learning experience for all.

More art – especially all-weather sculptures – can be put up, as well as murals on blank walls. Assign areas for buskers and performers. There are several stages where performances can be organized:  Esplanades 1E, and 4 are the largest; there are smaller stages on all the rest. Pop-up stalls for snacks, handicrafts, and pasalubong can be put up at designated areas at specific times. This can add revenue for the city and help micro-entrepreneurs.

For better mobility, especially the elderly and PWDs, some areas should have wheelchairs, baby carriages, and kiddie bikes for rent.  Drinking fountains can be installed.

Finally, maintenance of the Esplanades’ infrastructure is paramount. Rails and barriers need rustproofing; plants need to be trimmed and weeded regularly. Some areas have poor drainage, which can become hazards and hasten deterioration. Good lighting is needed. Regular replenishment of fish stocks and fingerlings should continue; restrooms and covered waiting areas can be built. While using the river for public transport is not an option due to low overhanging bridges, the Muelle Loney area from Quirino Lopez Bridge all the way down to the port, Parola, and Fort San Pedro, can be a scenic route for sunset boat trips, dining, and entertainment. Fun runs and river walks could start at Carpenter Bridge, go through most of the Esplanades and the bridges, and end at the Freedom Grandstand. More riverine activities can be organized: rowing, paddle boats, dragon boat racing, swimming. All these are guaranteed to turn more people into #Esplanaddicts! – Rappler.com