‘Displaced’ students in UP Diliman 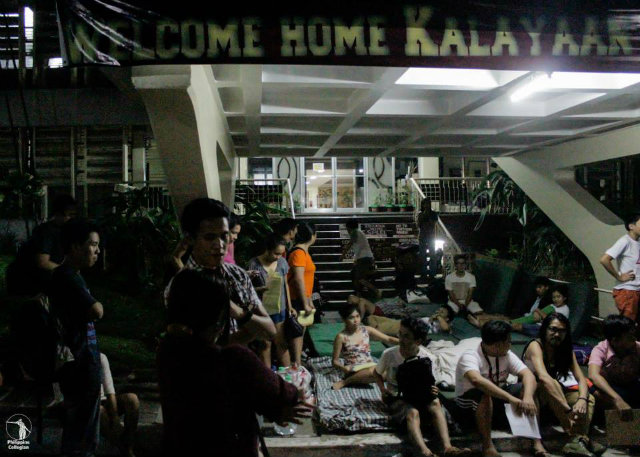 MANILA, Philippines — While waiting for available slots, students and parents trooped to the entrance hall of the Kalayaan dormitory in the University of the Philippines Diliman.

A mother from Pampanga stood in for her daughter who got sick after staking out the Office of Student Housing.

“Sabi nga niya sa akin, gusto na niyang mag-leave of absence dahil hindi kaya ng katawan niya yung pagod (She said she wanted to take a leave of absence after her body gave up on her due to exhaustion,” she said.

Around 20 other parents have been awaiting the fate of their appeal as their children attended classes. As of July 31, 2015, nearly 300 rejected students filed for appeals.

Days have passed since the scheduled announcement, but the distribution of dormitory slots remains unclear. (READ: UP starts classes with ‘homeless’ students)

This school year, applying for UP dormitories has been a difficult experience for many due to the sudden change in the approval procedures and the the sudden influx of students.

One of the students was Kent Cadalin, an engineering student from Zamboanga. In his 3 years in UP, this was the first time he was rejected for a dorm slot.

(When the results came out, I was not accepted because the income tax return that I submitted was for 2013, when it should have been 2014. I immediately told my parents, and they immediately sent it to me because our place is far. I submitted the requirements in the next batch run, but I was still not accepted.) 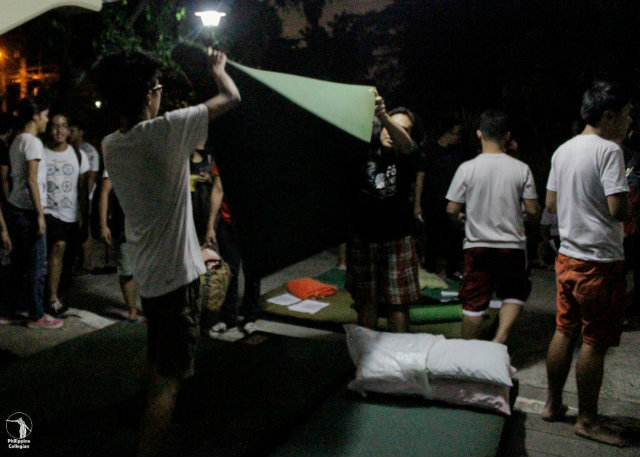 Dormitory applications were done online in 3 batches: the first was for freshmen, while the second and third were open for all. Each had an appeal process for those who were unable to secure slots and for those who were admitted but could not afford the dorm fees.

Cadalin immediately submitted an appeal. Results were initially set for July 31 but got delayed for several days. Homeless in the city, he sought shelter in the office of the All UP Workers’ Union, where about 20 other homeless students are staying.

“They did not give any reason. The notification just said ‘we regret to inform you that you did not qualify for a dormitory slot,” Cadalin said in a mix of Filipino and English.

When Caladin’s parents found out he was not granted a dorm slot, they tried to borrow money for their son’s allowance and boarding house fees.

Because of the rising cost of education and living in Manila, Cadalin’s parents told him this may be his final semester in UP.

In the evening of August 5, the list of granted appeals were finally released. Cadalin’s appeal was granted. He was given a slot in a dormitory he chose.

Other students like Justine Lazanta, who hails from Laguna, were not as lucky. Under the UP scholarship program, Lazanta belongs to Bracket E1, the lowest income bracket for UP students.

“I was on time in submitting the requirements. When the result was released on July 22, I was not on the list,” Lazanta recalled.

He was eventually granted a slot, but was assigned to UP’s Centennial dormitory, where monthly rent costs P1,500, one of the highest rates among the dormitories on campus.

“I confirmed so that I could still appeal and be assigned to a more affordable dormitory. But it didn’t work,” Lazanta said.

Classes have already started on Monday, August 3, but because he could not afford the rent, Lazanta decided to commute to and from Laguna every day.

The rates of other UP dormitories such as Molave, Yakal, Kalayaan, Ilang-ilang, and Sampaguita range between P225 to P500 per month, inclusive of electricity and water. Many students prefer to stay in these dormitories.

Compared to the previous years, dormitory applications were mostly handled by the Dormitory Oversight and Admissions Committee (DOAC) instead of the OSH. DOAC is also headed by the university’s Business Concessions Office head, Racquel Florendo. It was created by the Vice Chancellor for Student Affairs, but there is no student representative in the committee.

While the issue is being resolved, the UP administration is renting out transient rooms — vacated dorm rooms – to interested students. But other students – some of whom came from provinces like Cagayan de Oro, Lanao del Norte, Cebu, and Davao – ended up camping out near the Kalayaan dorm or in offices. — Rappler.com