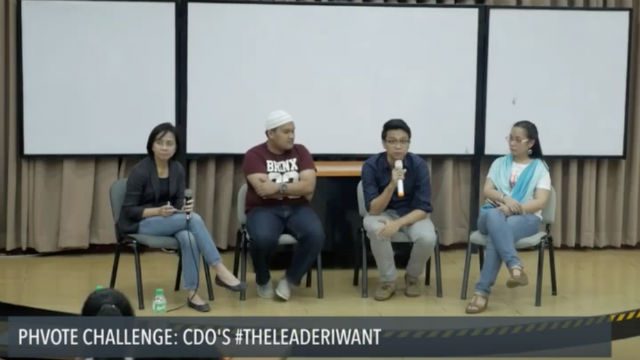 When asked about the characteristics of CDO’s youth, Nor-Jamal Batugan, President of Sira’j Muslim Religious Organization, speaking for Moro youth, said that more young people care about the political landscape mainly because of the Bangsamoro Basic Law. According to him, there is a huge Muslim youth organization that supports different political candidates in their campaigns and policies implemented.

Besides being affiliatied to politicians, Ernesto Neri, a fourth year Xavier Law University student, described the youth of CDO as engaged and participative. “In Cagayan de Oro, the youth has a high level of societal consciousness,” he said.

There are youth organizations that go to communities to give them political education or even teach them how to vote, according to Neri.

Despite being more involved, the youth leaders think that there are still challenges.

For Batugan, the main hindrance is making others understand that Moro people are also Filipinos. “Not all Moros have this mentality of cessation from the country,” he said. More Muslims are even transferring to the city for greener pastures and he believes that most of them are participating in the discussion.

Neri, being a law student, said that the challenge lies in selecting who to vote in the 2016 elections. “The presidency does not require a technocrat, it needs someone who inspires,” he said. Neri clarified, however, that he has reservations on voting for someone who plans to implement the law by violating it.

Students and faculty members in the audience also shared their sentiments.

Maria Rivera, a professor from the university’s Development Communications department, said there is too much complacency among the youth. She asked whether they want to experience the same repression the students in the 1970s did.

For her, the students do not have enough “hugot” (pain to go back to) to act on present problems. “Saan ba dapat manggaling ang hugot para umaksyon tayo?” she asked. (What should we experience for us to take action?)

Contrary to what the professor thinks, a student in the audience said that the youth’s compacency is not about the lack of “hugot” but a platform to express their opinions. Hence, they would rather complain on Facebook and Twitter, he said. According to Neri, about a third of the city’s population are composed of the youth. Neri shared how he personally don’t have any candidates in mind yet.

While some students were not able to express their thoughts during the forum, some shared it on Twitter.

Rappler Investigative editor Chay Hofileña, who moderated the panel, invited the students to use X, Rappler’s online blogging platform, to share their views.

During her presentation, Hofileña noted that 74% of 2016 voters are 39 years old and below. In a very tight race, the youth can make a difference in the victory of a candidate. She encouraged the audience to know the candidates’ stances issues.

“Elections are not just about numbers. They are about issues. Issues will determine where our country is headed,” Hofileña said. (READ: #PHVote Cebu: Using social media for responsible voting)

Hofileña emphasized the need to go beyond personal politics and focus on the 6 major issues that elected officials will face in the coming years: corruption, climate change, poverty, peace in Mindanao, overseas Filipino workers (OFWs), and foreign policy.

She invited the crowd to to be more informed and share what they know with their networks to raise more political awareness in the upcoming elections. — Rappler.com