When UP Diliman turned red again

Apr 30, 2016 12:34 PM PHT
Dwight Angelo De Leon
Facebook Twitter Copy URL
Copied
For the last 4 years, the night either bled blue or yellow. I have witnessed the announcement in the last two years. At 7 pm, people were starting to fill up the facade of Vinzons Hall. They were mostly from the Student Alliance for the Advancement of Democratic Rights in UP (Stand UP), the progressive political organization of UP Diliman usually associated with the radical Left.

Hats off to them – they were the reason why Vinzons had been so vibrant and energetic every year. It was their music, their chants, the euphoria of listening to songs about the power of youth participation and Bob Marley’s call to fight for our rights, that made Vinzons the avenue of the biggest university spectacle of the land.

April 21, Thursday, was election day for the University Student Council (USC), the nucleus of Philippine youth politics that bred the likes of Lean Alejandro, Malou Mangahas, Chito Gascon, Mon Palatino, Atom Araullo. When people ask why the UP student council is so important, the usual response is “because we are the microcosm of Philippine society.”

Oh, how we overuse that. But it’s true. This microcosm had produced nationalists, pseudo-progressives, crocodiles, watchdogs, martyrs.

For the last 4 years, the night either bled blue or yellow. I have witnessed the announcement in the last two years.

Stand UP, the life of the party at Vinzons, would end up in tears after the announcement. The chants before the proclamation of winners would become chants from breaking voices. This year, one person even made an event page about it on Facebook – the very accurate “Iyakan sa Vinzons (Tears at Vinzons).” 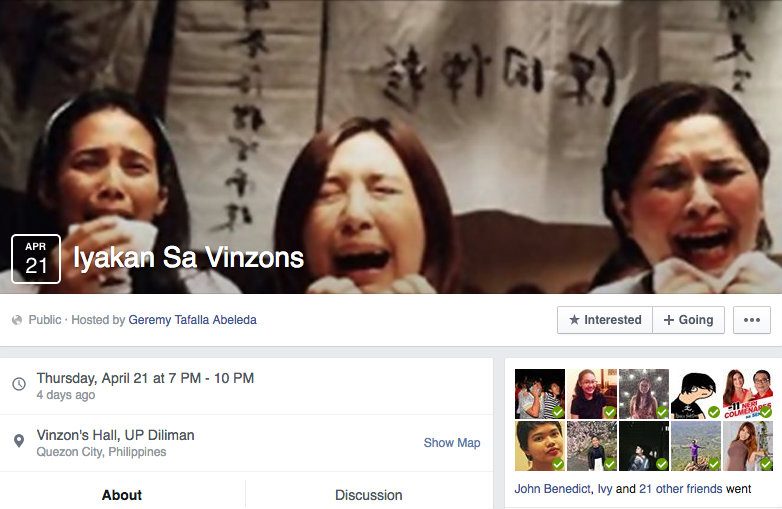 I asked Mench Tilendo, the current party chairperson, on a dzUP interview special about this. How do they interpret the statistics? Is the demographic really changing? Aren’t they bothered?

For her, it was not a loss; every year is a step closer to victory.

At 8:30 pm, Stand UP’s morale couldn’t be higher. dzUP was reporting live at Vinzons. For the first time, we were in charge of the closing ceremonies (since 2014, there had been no closing ceremonies; I’m not sure before 2014). Station manager Ma’am Ivy, program manager Ma’am Chryl, dzUP staff Faith and Roj, and dzUP Radio Circle’s yours truly were hosting.

Sometime during the radio special, the winners were being announced. Radio Circle’s Mia Capio was on-air at 8:10. Winners from the College of Mass Communication were being declared.

Stand UP’s CMC chapter swept the standard bearer positions, a first for Stand UP CMC since 2008. Derrick Chan was also on-air after Saligan, the local chapter of Stand UP in College of Social Sciences and Philosophy (CSSP) and the forever loser of the blue-dominated college, just won two major positions: the vice chair and the CSSP Rep (for the first time in 12 years). All 4 of their councilors also won.

At 9:20 pm, we read the Facebook post of Philippine Collegian. Stand UP had swept the representatives in 9 of the colleges. The crowd got wild. The spectators of Stand UP could feel it. They could see it coming. It was not their night for the last 4 years, but this night, it’s different.

At 9:50, dzUP’s Jessa Gabon sang on stage – one of the night’s highlights. She sang 3 songs, but the most notable one was “Irreplaceable.” The lyrics that captured the audience’s participation? “To the left, to the left.”

At around 10:20 pm, Ma’am Ivy and Ma’am Chryl announced that the winners of the student council would be released in a few.

Vice Chancellor Neil Santillan started with the voters’ turnout. 49% of the student population voted, a slight decrease from last year’s 51%.

The members of the University Student Electoral Board then announced the winners in the college representatives. Stand UP had 10, Alyansa had 4 and Kaisa had 1. Five independent candidates won.

Then came the announcement of councilors. Last year, Alyansa had 8, Stand UP had 3, and independent Mark Navata got one slot. KAISA, who had zero in the last two years, earned the 12th place via Yael Toribio.

Eleventh place went to Alyansa’s Magnolia Del Rosario. This was her second bid; she placed only 15th last year. This would be Alyansa’s last win for the night. UP ETC president Leo Rivera did not make it despite the solid CBA and School of Econ vote for the past few years. Billy Orquin didn’t make it to the list of winning councilors despite the strong “Billy na kayo” campaign slogan and the support from UP Babaylan. Cassie Deluria didn’t make it despite her interesting platform on awareness on mental illnesses.

Sixth place went to Kaisa’s LA Castro, who also ran last year but managed to place only 22nd. In 5th place was Patrick Sicat, a law student running as independent. He was formerly a member of Saligan sa CSSP.

The 1st to 4th positions were swept by Stand UP. No other political organization had done this before other than Alyansa in 2004. Shari Oliquino, who also ran last year but only ranked 16th, was only 11 votes behind third placer Micah Tolosa. Tolosa, together with first and second placers Ben Te and Donn Bernal, are all from CSSP.

Before Ben Te’s name was announced, everyone was shouting his name. It was obvious; he was the runaway winner. With a cool name and a strong presence during and even before the campaign (as president of League of Filipino Students), there was no way he was not going to top that race. His 5,383 is record-breaking. He beat the record set by Atom Araullo when he ran for councilor in 2003.

The result for the vice chairperson race was more obvious. USEB first released the slide that showed the number of votes – 8,409 votes versus 2,798. Everyone already knew it was Beata Carolino. The people from Stand UP were already celebrating even before the next slide was revealed. Beata, last year’s #1 USC councilor, just set the record for most votes cast for any candidate in the USC.

And finally, it was the most important position. The crowd became a little silent.

After a poor showing in the vice chairperson, councilor and college reps’ race, it was easy to guess that Alyansa’s AJ Montesa was in third place. But it was more difficult to guess how independent candidate Raymond Rodis performed.

While never in the new millennium did an independent candidate win for chairperson, Rodis had his case. He was second placer in the 2014 USC councilor elections, he had an outstanding track record, and he was the choice of those who were just getting tired with the bickering between Alyansa and Stand UP. He was the choice of those who do not believe in partisan politics anymore.

When Vice-Chancellor Santillan said, “Ang unang chairperson – “ there were grasps from the audience. Was the vice chancellor going to say independent? Was he?

But alas, it was Stand UP’s night. Bryle Leano of Stand UP won, the first College of Engineering student to do so post-Martial Law era, and his number of votes was also record-breaking in the chairperson race. The crowd was in a celebratory mood; even the party chairperson and campaign manager from Kaisa were just glad it was not Alyansa. It was a 180-degree turn – bilog ang mundo, bilog ang bola, may gulong ng palad. (The world is round. The ball is round, fate has wheels.) After 4 years, Stand UP is back.

This account of the 2016 USC announcement of winners is loosely inspired by an article narrating the events of the 2000 announcement of winners written by Ederic Eder. It was Stand UP’s first win since it was founded. Eder wrote, “During the post-election victory gathering of the Stand-UP members, some people in the crowd commented: ‘It took a presidency like that of Erap (Joseph Estrada) for us to finally win!’”

Stand UP’s massive victory this year could perhaps be because of the past Alyansa-led USC’s polarizing stance on the socialized tuition system (as compared to student councils of other campuses) and the passive participation on issues such as the plight of the Lumad, media killings, desaparecidos, political prisoners, Kidapawan farmers, and other calls of action to fight the culture of impunity.

The post-announcement program of Stand UP at the entrance of Vinzons was met with cheers and tears. At 12 midnight, the night was still young for a political organization deprived of a win for 4 years.

Dwight is a 19-year-old student pursuing a degree in broadcast communication at the University of the Philippines Diliman. He writes and occasionally hosts a weekly program of dzUP 1602. He is currently the vice president for programming of dzUP Radio Circle, the official student organization arm of dzUP 1602.