“Duterte is the Apollo that this country needs – to slay the corruption, to slay drug addiction, and to slay poverty…Good doesn’t defeat evil. The greater evil defeats evil,” Quiboloy said of the mayor, pertaining to the story of Apollo the Serpent Slayer, during a private banquet for VIPs.

Fresh off the last leg of the Comelec-sanctioned presidential debate, Duterte spent time with Quiboloy and the crowd at the Jose Maria College to discuss past controversies like his role in extrajudicial killings and his recent rape remarks.

Quiboloy – who presents himself as the “Appointed Son of God” – and Duterte were already friends long before Duterte became the mayor of the city. The church leader was one of the people who pushed the mayor to seek the presidency after having a dream of Duterte in Malacañang Palace.

He is actively campaigning for the mayor while also providing free transportation.

During the birthday-celebration-turned-campaign-sortie, Duterte told the crowd, “‘Pag manalo ako, except yung Greater Metro Manila, we have to continue this thing, yung programa ni [President Benigno] Aquino na maganda at nakapabuti sa tao, we will continue!“

(If I win, except for the programs in Greater Metro Manila, we have to continue the programs of Aquino that are good for the people.)

“I will get Roxas and the others candidates’ nice programs. I will copy them,” Duterte continued, generating laughter from the audience.

During the 2010 presidential elections, Quiboloy anointed administration bet Gilberto Teodoro, who finished 4th in the race.

Quiboloy’s birthday, which is celebrated annually to coincide with National Children’s Day, was attended by other national candidates. 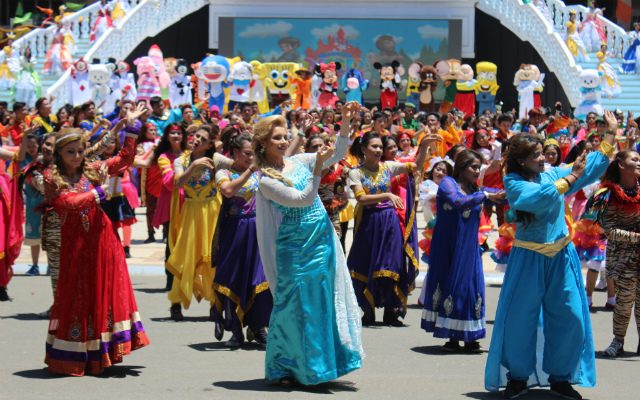 A carnival was set in the heart of the church group’s compound, where 1,500 children of all ages participated in the activities. Many lined up for the free rides and some had trouble carrying their free candies and toys.

One of the highlights of the event was the release of Quiboloy’s self-produced theatrical play, “Apollo: The Serpent Slayer.” During the evening parade, Disney characters performed live.

“One good deed you show to a child, he remembers for the rest of his life,” Quiboloy said of the celebration.

In the most recent Pulse Asia Survey released Tuesday, April 26, Duterte emerged the favored presidential bet of 35% of registered voters nationwide, despite his controversial comment on rape. – with a report from Geriann Montinola/ Rappler.com

A Mass Communication student from the University of Mindanao, Saimehen Iluis is one of Rappler’s lead Movers in the Davao Region. Geriann Montinola is a Rappler Mover from Davao City.