Oplan Metro Yakal Plus: Preparing for a megadisaster MANILA, Philippines – With at least 35,000 fatalities and a hundred thousand injured, no electricity, water, telecommunications or even passable roads, how will Metro Manila residents begin to pick up the pieces? (READ: All you need to know about preparing for earthquakes)

This worst-case scenario is an event that the government has been preparing for these past few years.

Oplan Metro Yakal Plus, the contingency plan of the Metro Manila Disaster Risk Reduction and Management Council (MMDRRMC), details the protocols and procedures that would take place in the event of a 7.2 magnitude earthquake.

According to experts, the “Big One” which may happen in our lifetime, could strike once the West Valley moves. (READ: What dangers await when the West Valley Fault moves)

The MMDRRMC is composed of representatives of local government units in Metro Manila and regional officials of national government agencies. It is presided by Metropolitan Manila Development Authority (MMDA) Chairman Emerson Carlos.

Under Republic Act 10121 or the Philippine Disaster Risk Reduction and Management Act of 2010, it is the MMDRRMC that has the primary responsibility to respond to this situation. The national government will provide a supporting and coordinating role. (READ: The role of LGUs, local councils during disasters) 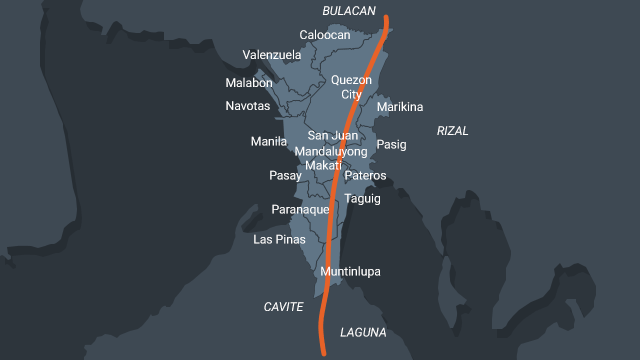 Taking into consideration the possible effects of a major earthquake on the nearby provinces of Bulacan, Rizal, Cavite and Laguna, Oplan Metro Yakal Plus, launched on October 18, 2015, also incorporated the roles of other regions, provinces, and national government agencies in the event of a magnitude 7.2 magnitude rocking strinking the Greater Metro Manila Area.

The MMDA, for example, is in charge of command and control, as well as search and rescue operations.

The contingency plan is based on the Greater Metro Manila Area Risk Analysis Project (GMMA-RAP) and previous studies such as the Metro Manila Earthquake Impact Reduction Study (MMEIRS), and Project READY. Its previous versions were Oplan Lindol which was adopted in 1999, and Oplan Metro Yakal formulated in 2011.  (READ: Fault-finders, storm-chasers: Hazard mapping in the PH)

In the event of a major earthquake, Metro Manila will be geographically divided due to the expected collapse of critical infrastructure, such as bridges and flyovers. This is the reason why Oplan Metro Yakal Plus has divided Metro Manila into four quadrants: North, East, South, and West. 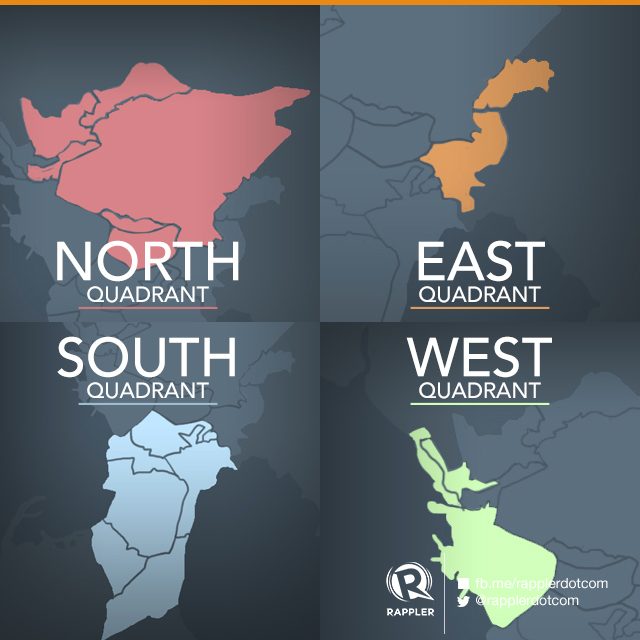 Each quadrant has its respective commander and emergency operations center, which will be staffed round the clock and ready for response in the event of an emergency. Quadrant commanders take the lead in ensuring orderly response efforts within their quadrant, while coordinating with the MMDRRMC.

Each quadrant also has prepositioned equipment to help with the rescue of casualties and collapsed structures, augmenting the resources of the local government units, such as cities and barangays. Each city, municipality, and barangay takes primary responsibility for response operations and evacuation centers in their immediate areas.

Under the law, barangays take the lead in preparing their own communities.

Every barangay has a DRMMC that has charge over risk assessment and contingency planning, funded by the local disaster fund. In the event of an earthquake, barangays are tasked to implement their own response plans in coordination with their city disaster risk reduction and management office.

The Metro Manila earthquake drill on June 22, 2016, aims to test the effectivity of response plans of all stakeholders, such as schools, churches, businesses, households, and even the transportation sector. It aims to identify any gaps in training, planning, operational execution, and even equipment. (READ: Preparing your family for anearthquake)

“All members of the community should know what to do in case of a 7.2-magnitude earthquake,” said MMDRRMC Chairman Emerson Carlos in a briefing at the MMDA headquarters. – Rappler.com

Learn more about the #MMShakeDrill by clicking the button below: