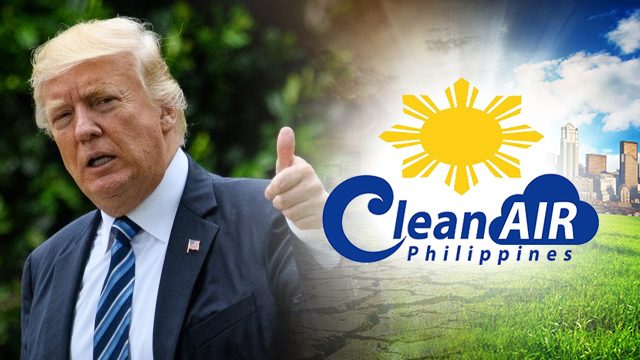 Facebook Twitter Copy URL
Copied
Environmental groups see the ASEAN Summit in Manila as the perfect opportunity to make an appeal to US President Donald Trump, and echo the country's call to uphold the 2015 Paris climate deal

MANILA, Philippines – A local environmental group has called on US President Donald Trump to take a second at global warming and climate change, as the world leader visits the Philippines to attend the 31st Association of Southeast Asian Nations (ASEAN) Summit and Related Meetings.

Michael Aragon, chairman of Clean Air Philippines Movement, Incorporated, made the call at the launch of the joint CAPMI-Environmental Management Bureau (EMB) Clean Air Patrol program at the Department of Environment and Natural Resources (DENR) main office in Quezon City on Friday, November 10.

In explaining the importance of the issues of global warming and climate change, especially in the case of a vulnerable country like the Philippines, Aragon cited the massive devastation inflicted by Super Typhoon Yolanda (Haiyan) that killed over 6,000 Filipinos in November 2013.

“Because of the continuing threat to Filipino life and limb, we are urgently appealing to US President Donald Trump, to take a second look at the issue of global warming and climate change,” he said.

Trump is due to arrive in Manila on Sunday, November 12, for the ASEAN meetings.

Seizing the opportunity, to raise the concern while the US leader is in town, the CAPMI chief told Trump, “Mr President, we do not intend to debate on your personal views on climate change but we seek your compassionate heart for you to see the clear and present danger that continuously threatens all Filipinos due to global warming and climate change.”

“The policies and decisions of the leader of the most powerful country in the world also affect us here in the Philippines,” he added.

In June 2017, Trump ordered the withdrawal of the US – the world’s second biggest carbon emitter – from the 2015 Paris climate agreement, saying that he will not support a deal that “punishes” his country. (READ: Trump pulls U.S. out of global climate change accord)

Several world leaders and environmental advocates who worked hard on realizing the 2015 climate deal tagged the US’ withdrawal as a “tragedy.”

Despite the US’ insistence that it will not return to the negotiating table, CAMPI still saw the Philippine hosting of the ASEAN Summit as an opportunity to repeat the appeal made by the Philippines’ Climate Change Commission (CCC) to the US.

“Although not a major contributor to the overall global footprint of the world, the Philippines’ minor contribution to the total global carbon footprint is only 0.3% or less than 1% vis-à-vis the major carbon footprint contributions of the first world countries yet when fatal disasters strike due to global warming and climate change it is the Filipinos who suffers most,” Aragon said.

The Philippines’ vulnerability to climate change is backed up by several studies conducted by the German Watch organization and the United Nations Office for Disaster Risk Reduction (UNISDR).  – Rappler.com