Jan 6, 2013 11:29 AM PHT
Voltaire Tupaz
Facebook Twitter Copy URL
Copied
Food policy experts note that interventions in ending world hunger will be effective only if pursued in collaboration with groups working to eradicate it 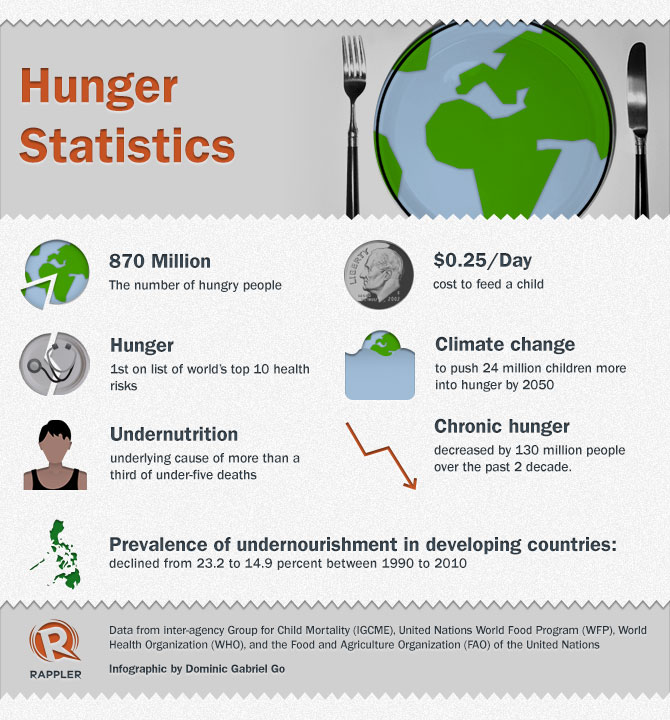 MANILA, Philippines – Tonight, as we go to bed, one in 8 people will sleep on an empty stomach. There are about 870 million people in the world who suffer from hunger due to food scarcity based on Food and Agriculture Organization (FAO) data.

This is ironic because the world produces sufficient food for all despite the increase in population, FAO said. According to the World Food Program, it costs just US $0.25 per day to feed a child with healthy food.

Hunger ranked first on the list of the world’s Top 10 health risks, killing more people than AIDS, malaria and tuberculosis combined, according to the World Health Organization (WHO).

Climate change aggravates the problem as it threatens to push about 24 million children more into hunger by 2050, the WFP said.

From reduction to eradication

Recognizing the gravity of the situation, FAO recently changed its global goal from merely reducing hunger to eradicating it.

“This unequivocal commitment sets our sights where they should be,” FAO Director-General José Graziano da Silva said during the recently concluded meeting of the UN body’s governing council.

“We cannot accept anything less than the eradication of hunger, food insecurity and malnutrition,” Graziano added.

Over the past 20 years, chronic hunger has decreased by 130 million people. The prevalence of undernourishment in developing countries has also declined from 23.2% to 14.9% between 1990 and 2010. However, progress in addressing world hunger has slowed down since 2008, FAO reported.

Globally, under-nutrition is considered a culprit in more than a third of under-5 deaths, the United Nations Inter-agency Group for Child Mortality Estimation reported.

The situation is alarming considering that hunger is, according to the WFP, the “world’s greatest solvable problem.” But how do we address hunger?

The WFP listed at least 6 effective ways to solve hunger based on its 50 years of experience.

However, food policy experts noted that interventions in ending world hunger will be effective only if pursued in collaboration with groups working to eradicate it.

“No government or organization alone can overcome hunger. It is a goal that needs to be embraced by all. Civil society organizations, the private sector and other actors have important roles to play in our quest for a hunger-free sustainable world,” Graziano said. – Rappler.com