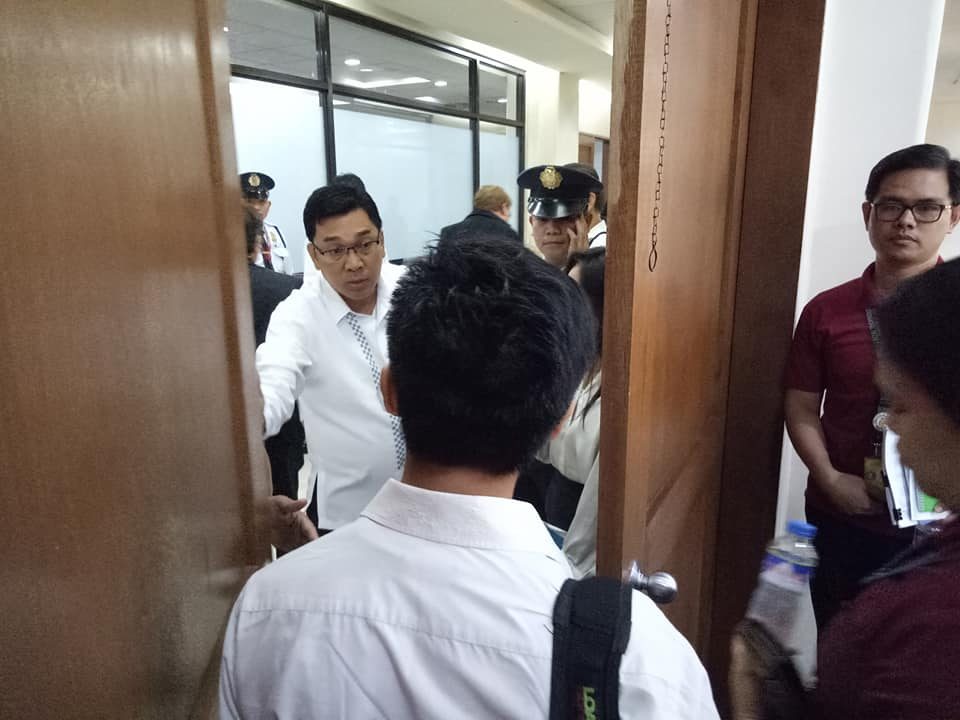 MANILA, Philippines — Several student leaders and campus journalists were barred from the public hearing on the implementing rules of the law on free education in state colleges at the House of Representatives on Monday, March 19.

The students were locked inside a holding room in the House to keep them from attending the hearing. They were only allowed to leave the room, where they were guarded by House security, after the hearing.

The College Editors Guild of the Philippines (CEGP) posted the video showing students inside the holding area banging the doors of the room, demanding to be allowed to attend the hearing, as well as their heated interaction with House authorities when they were finally allowed to leave.

As of posting, the video garnered over 4,000 views.

It was supposed to be a public hearing on Free Education and Implementing Rules and Regulations of the Committee on Higher Technical Education (CHTE) but only a few selected students were allowed to attend it.

House authorities also prohibited representatives of student publications from covering the event. (READ: Why campus journalists should go beyond classrooms)

Ruth Lumibao, legislative staff of Kabataan party list, told Rappler in a phone interview that they waited for more than two hours in the holding room only to find out that they had been locked inside. She said that it was the CHTE who gave the orders to halt the participation of students in the hearing.

(The meeting was at 1:30 pm but around 3:30 pm, the leaders and student guests were still in the holding room. They refused to let them move out when the hearing was actually starting already. They said they were still fixing the template, but the truth is they already started.)

Lumibao said the House committee and the CHTE offered no explanation regarding what happened. She also wondered aloud why members of the Philippine National Police were in the area during the hearing.

“It’s weird because aside from the Legislative Security Bureau, why was there PNP inside? It’s really weird. Because we all know that it’s LSB that handles security in Congress. Why did they have to ask for another security party?” Lumibao said in a mix of Filipino and English.

Lumibao also shared that Raul Manuel of the National Union of Students of the Philippines and his colleagues were sent out following tensions between Commission on Higher Education (CHED) officials and student leaders during the hearing.

Lumibao was one of the leaders who got detained in the holding room.

“This is why the youth continues to dominate the streets instead of taking the battle where the arena only favors the reactionaries. Thousands more of youth will be angered by the intensified commercialization of Philippine education and they will surely mobilize to fight for a genuine free education,” said Jon Callueng, CEGP national president.

The students sought to participate in the hearing to raise their concerns and air their opinions about the new free tuition policy. (READ: Higher budget, free tuition in state colleges: Easier said than done)

Rappler has asked the CHTE about its move to bar the student leaders and campus journalists from the public hearing, but it has yet to give a response as of posting.