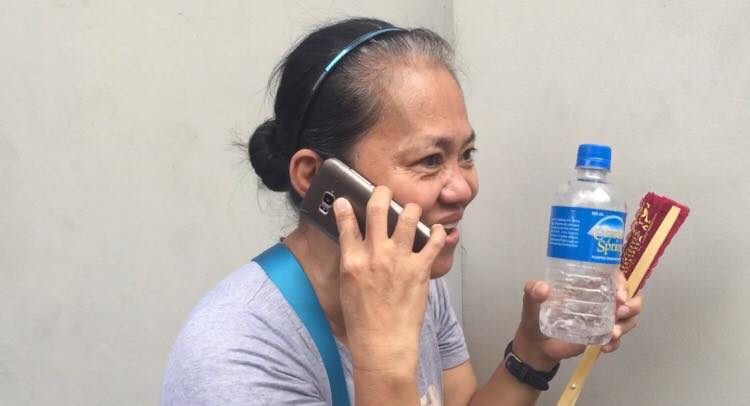 MANILA, Philippines – It is a moment like no other.

Every year, the Supreme Court (SC) opens its doors to the public for a spectacle. Names of successful Bar examinees are flashed on a giant screen and the court grounds transform in an instant.

On Thursday, April 26, there was a long, anxious wait before Bar chairman Associate Justice Lucas Bersamin took the stage to announce the results past 1 pm. A couple of hours earlier, media had reported that only 25.55% passed one of the hardest licensure examinations in the country. (FULL LIST: Bar Exam 2017 passers)

When they learned of the passing rate – a dramatic drop from the 59.06% the past year – the father of this year’s topnotcher Mark John Simondo thought that his son wouldn’t make the cut.

The Simondos learned of the good news in Bacolod. Simondo is a graduate of the University of St La Salle, where he also earlier earned his Nursing degree.

At the SC grounds in Manila, parents volunteered for the task of waiting under the heat to spare their children the nerve-wracking suspense.

Names arranged alphabetically started scrolling from the giant screen, and shortly after, there was a scream from the back.

It came from Editha Billones who didn’t know what she would do first: jump for joy, focus on the screen to make sure she read it right, or call the person who had been waiting all morning for the phone to ring.

Sought for an interview, Zandalee politely declined and said: “This is my mother’s moment, and not mine.”

She added: “It’s enough that my mother has all the attention she deserves. After all, she taught me how to read and write, and without learning these skills, I would not have survived the Bar.”

Ilocano fathers Jerome Bello and Tomas Torralba held each other so tightly you would think they were longtime friends. But in fact, they just saw each other again that morning, after going to the same university way back in the 1980s.

Their sons Jaymart Bello and Klinton Torralba took the Bar. Both passed, with Klinton ranking 9th.

(I felt like fainting out of joy. If only I could jump until I reach the skies to express my happiness. We didn’t expect this because we only prayed that he would pass. My wife and I would have been happy even if his grade was only 75%.)

The tearful parents of Neneth Aporo, a new lawyer from the University of the Philippines, also said: “Tapos na ang paghihirap namin. Napakahirap ng inabot naming mag-asawa.” (Our hardships are over. My wife and I sacrificed a lot.)

Russell Jay Tagama hugged his wife, who spoke for the new lawyer in the family: “We’ve been waiting for this. This is God’s grace. We’re so thankful. This is a nice gift to our children, to our parents.”

Anne Lorraine Diokno of San Beda College in Manila screamed from the top of her lungs in the middle of the SC grounds when she read her name.

Five of Diokno’s batchmates from San Beda landed in the top 20 this year. San Beda and the University of Santo Tomas (UST) each had 5 topnotchers to share the recognition of having the most graduates on the list.

The usual top performing law schools, the Ateneo de Manila University and the University of the Philippines, managed to land in the top 20 this year – top 14 and top 20 respectively – after missing the top 10 last year. – Rappler.com