May 1, 2018 11:52 AM PHT
Lian Buan
Facebook Twitter Copy URL
Copied
We asked the new lawyers what they think is the biggest threat to the legal profession. They all seem to agree the threat is coming from within their ranks. 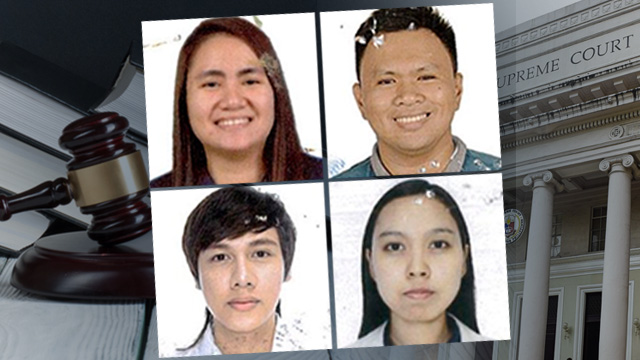 MANILA, Philippines – Every batch of new lawyers gives the country hope that not only is there fresh perspective coming in to the world of law, there is also idealism to fuel the pursuit of justice.

We talked to some of the examinees who placed in the 2017 Bar about their passions, their dream first client, and whether they would consider working for government. They are among the 1,724 new lawyers, part of the 24.55% who made the cut and survived the gruelling exams.

Bar Top 3 Camille Remoroza from Ateneo de Davao is already working for government. She is part of the legal staff of Deputy Ombudsman for Mindanao Rodolfo M. Elman.

“I think the highest form of service that one can give to our country is to be the ‘watchdog’ of the government. The Ombudsman does that. As they say, public office is a public trust. Working for this government is a sacred privilege, it demands integrity. But, with the Ombudsman, it demands more than that. Being part of the Ombudsman really challenged me to become a better person, and ultimately a better Filipino,” Remoroza said.

Top 6 Lorenzo Luigi Gayya from the University of Santo Tomas (UST) interned for the Public Attorneys Office (PAO) in law school. Their work there, he said, inspired him to become a lawyer for the less forturnate.

“Poverty, it’s always an issue. I’ve always wanted to change the notion that justice is only for those who can pay. Somehow and someday when I obtain the means and the skills, I want to work towards securing justice for those who have less in life,” Gayya said.

Gayya was already working for a private firm when he passed the Bar, something he said he would continue for now.

“I plan to be a litigation lawyer – the type who gathers information and evidence, prepares pleadings and argues before the court. This aspect of lawyering attracts me and I feel like this is something I’m meant for,” Gayya said. (WATCH: ‘Anak, pasado ka!’ and other victorious 2017 Bar moments) 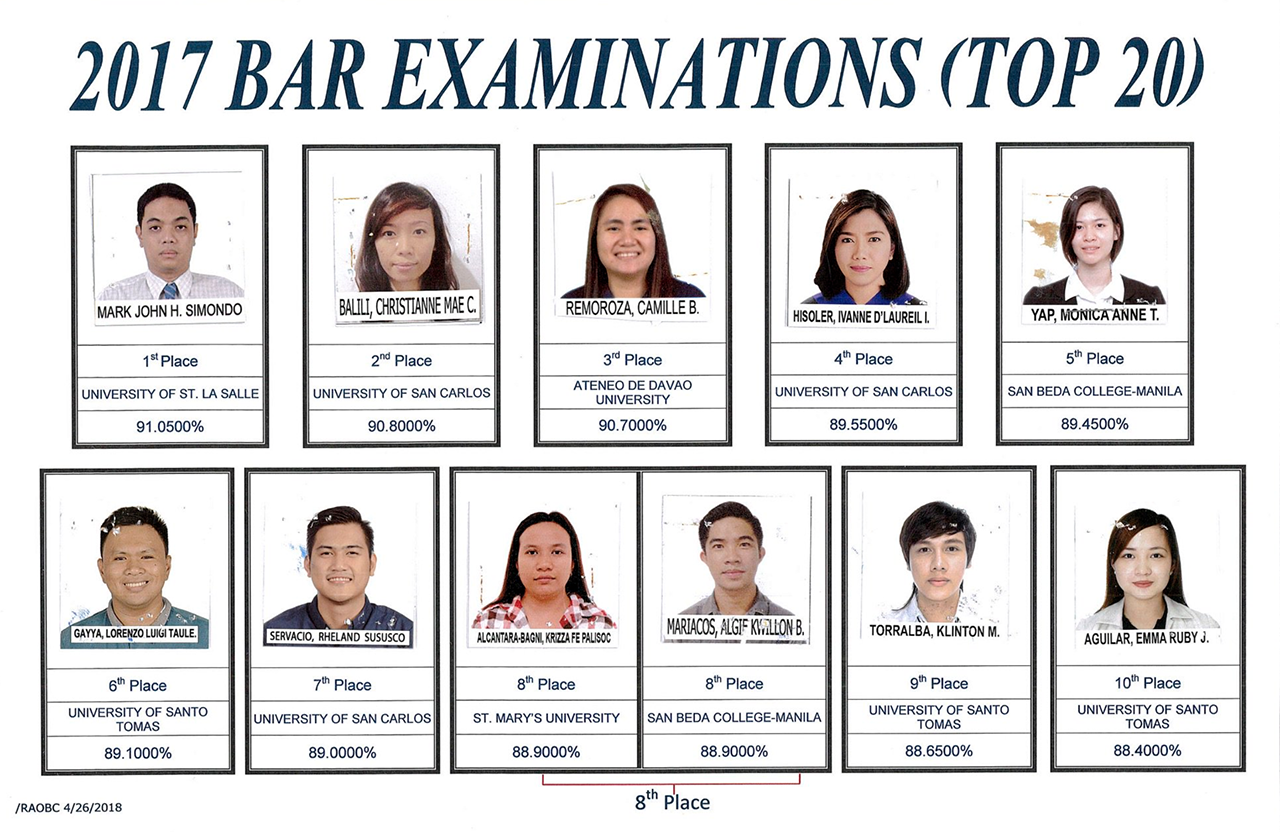 Bar Top 6 Klinton Torralba from UST said he doesn’t see himself working for government. “We can help the government even if we are not directly employed by it,” Torralba said.

Interesting because he comes from a family of politicians in his hometown in Badoc, Ilocos Norte. His background urges Torralba to push for a law “regulating, not necessarily prohibiting” political dynasties.

“Political dynasty in not an evil per se, and so is power. It is those who wield it who will ultimately tell whether it will bring goodness or not. So let us not altogether prohibit political dynasty, let us just regulate and limit it. After all, our country does not lack brilliant people who can lead us to prosperity, they just need an opportunity. Let’s give it to them,” Torralba said. 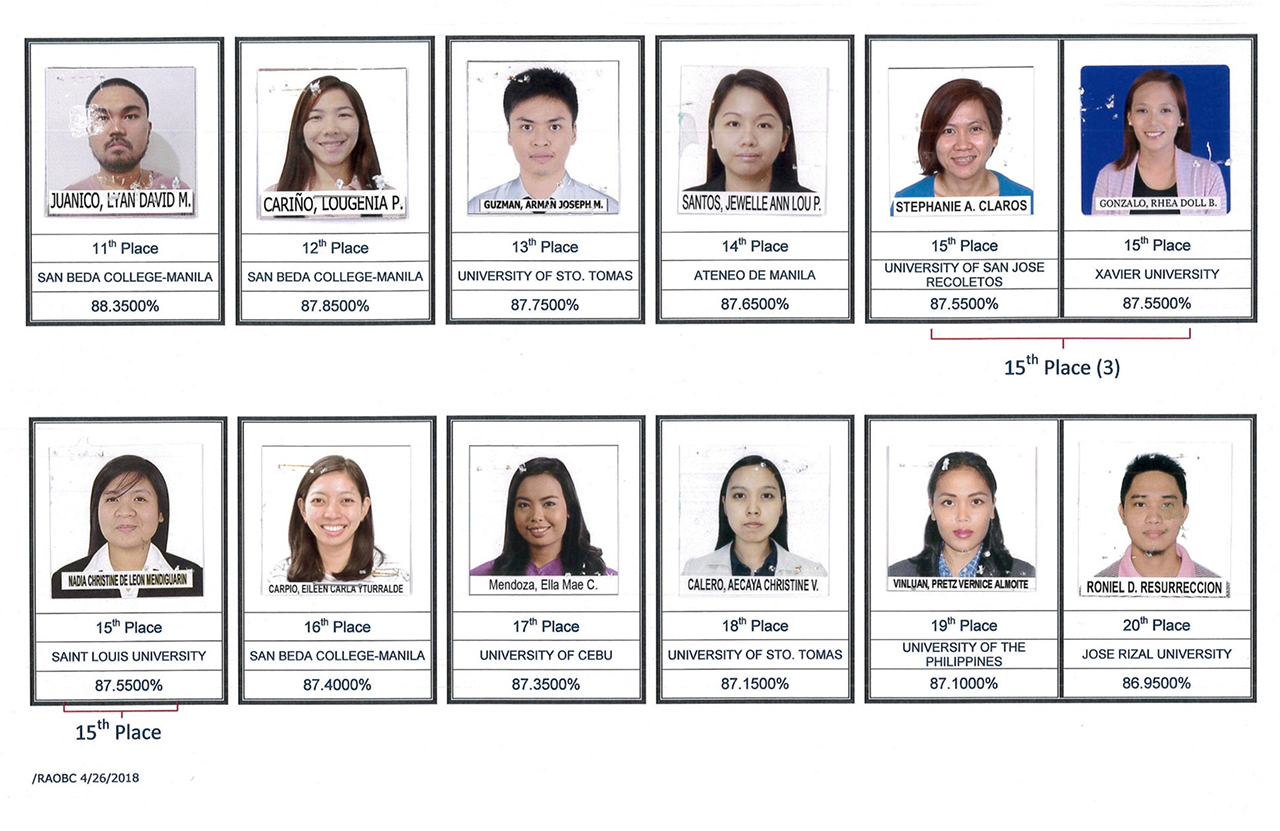 Remoroza is a Nursing graduate, but not necessarily out of desire. She said she needed a scholarship to be able to go to college, and the Nursing program of San Pedro College in Davao City offered her an academic scholarship. She said she had planned to continue medical school.

Remoroza eventually decided that law, not medicine, was for her. But her nursing background inspires her to pursue health-related legislation (if she becomes a lawmaker) or health-related advocacies (if she pursues being a public attorney).

Remoroza said her dream first case is medical malpractice, either as plaintiff or defendant.

“I believe that compared to other countries, the Philippines is not yet very strong at pursuing medical malpractice cases. Only those who can afford can go against big hospitals and health professionals. I also think that my nursing background can help me a lot,” Remoroza said.

“If passing a law is not sufficient to curtail hazing, I think the government must spend time researching on what makes joining fraternities contagious and sticky (borrowing concepts from Malcolm Gladwell’s The Tipping Point). It is only by answering these questions that we can finally solve this problem,” Torralba said.

Their fellow Thomasian, Bar Top 18  Aecaya Christine Calero, agrees with them. “I firmly maintain our stand, violence should not be tolerated in any form,” Calero said.

Calero’s stance against violence is personal; it was also what drove her to law school in the first place. (READ: 2017 Bar: Redemption for UST, sorrow for hazing victim Castillo’s mom)

“I just want to help people who experienced physical and verbal abuse. I know how it feels like and if it is possible, I don’t want anyone else to experience it,” Calero said.

The rule of law has become a catchphrase in the Philippines in the past year, in both good and bad ways.

We asked the new lawyers what they think is the biggest threat to the legal profession. They all seem to agree the threat is coming from within their ranks.

“There is no bigger threat to the legal profession, than us members of the bench and bar. There will be no corruption in the profession if the people in it are incorruptible,” Remoroza said. – Rappler.com