People’s SONA unites opposition in ‘true’ state of the nation 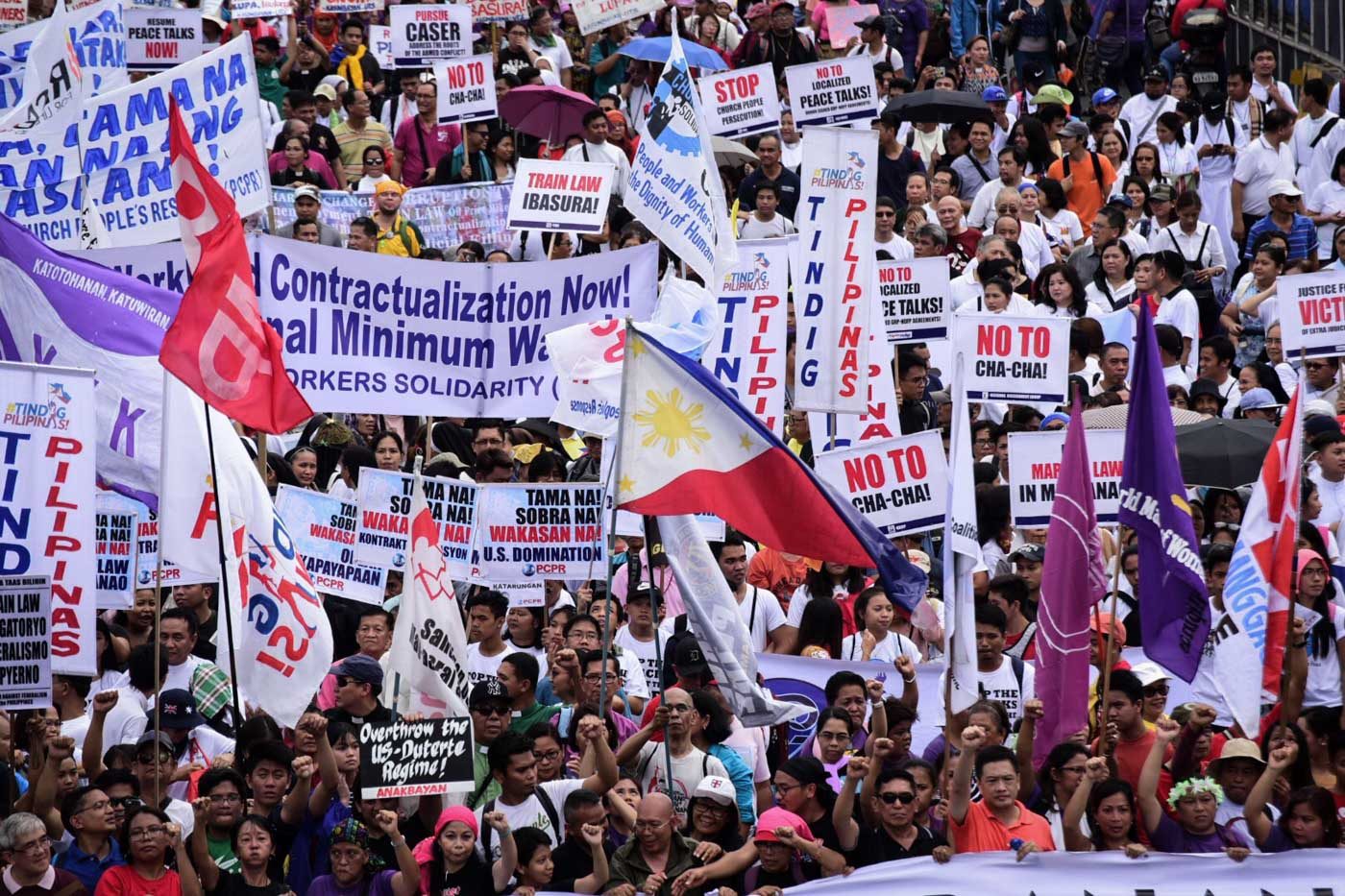 Facebook Twitter Copy URL
Copied
The protest action, which had about 15,000 at its height according to police, is the historic union of nearly 330 opposition groups tackling different, problematic issues facing the Duterte administration

MANILA, Philippines – Establishing a strong front against President Rodrigo Duterte, opposition groups staged a grand protest outside the St. Peter Parish Church on Monday, July 23, binding the opposition together to show the reality behind the presiden’t State of the Nation Address (SONA) (LOOK: IN PHOTOS: Thousands hold SONA 2018 protests around PH)

Dubbed the United People’s SONA, the protest is the historic union of nearly 330 opposition groups tackling problematic issues of the Duterte administration in an effort to present the “true” state of the nation. These groups come from political, civic, and faith-based coalitions. The roster included the #BabaeAko movement, Tindig Pilipinas, Coalition for Justice, and the Movement Against Tyranny, among other groups.

Coming with the 6,000-person strong crowd, various opposition groups staged their own mini programs along University of the Philippines – Diliman and Commonwealth Avenue before marching toward the main stage at St. Peter Parish Church.

By 5 pm, the number easily swelled to 8,000 anti-Duterte rallyists, based on the figures released by the police.

Protest organizers, however, pegged the number at a much higher figure of 40,000.

The United People’s SONA showed its strong opposition to Duterte’s charter change initiative, the war on drugs, tax reform, and contractualization – among other pervasive issues for the current administration – through speeches, performances and placards. (READ: #StoryOfTheNation: What do you want to hear in SONA 2018?) In her speech at the United People’s SONA, ousted Chief Justice Maria Lourdes Sereno imparted that the shift to federalism will have dictatorial tones.

(We don’t want a dictatorship, especially when we know President Duterte is weakening institutions that would protect our democracy and human rights.)

(Let’s fight back. The state of our nation is not to accept, especially now that it’s established that dictatorship is the goal of selfish politicians.)

She advised to opt for an improvement of the local government code and addition of budget for provinces rather than charter change.

Aside from speeches, the United People’s SONA also showcased performances. One of which was a cultural performance by RESBAK x SAKA that depicted a group of people reading out names of victims of the drug war.

Another grand display to oppose to President Duterte’s policies was the burning of an effigy of the President. Titled, “Dutertrain” the head featured the President’s face, with a body of a train depicting issues of the administration. The effigy was made by UGATlahi, a group that has made effigies since 1999. (There are many injustices and killings, but the main element of the effigy is the train because many are affected by the Comprehensive Tax Reform. So the train is the main image.)

“It benefits Duterte if we are a fragmented opposition but the fact that we have come together – all political colors, all civil society [groups]; we have really made our force very strong against our president,” said Paner.

Leila de Lima stressed the importance of a united front through a letter she penned that was read during the protest.

(In addition to Duterte’s SONA, it’s apt that we listen to the SONA of the Filipino people; not just the lies of Duterte, but the state of the Philippines and of Filipinos.)

The United People’s SONA called the convergence of opposition groups “an unprecedented display of unity unseen for at least a decade.” –Rappler.com