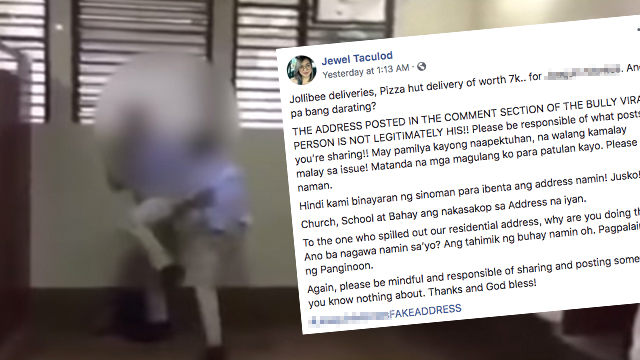 MANILA, Philippines – An unsuspecting family living at the alleged address of the Ateneo bully was caught in the middle of the mess, as thousands of pesos worth of deliveries wrongly ended up at their home.

As the bullying controversy blew up on social media, so did speculations and false information.

While many called for swift action from the school administration, some took matters into their own hands by putting the alleged address of the bully in comment sections online.

Others were all too quick to believe that this was indeed the bully’s address. Deliveries were sent to the address as a form of revenge – to make him and his family pay. But the address later turned out to belong to a school, chapel, and home of a senior pastor and his family.

Since Friday, December 21, fast-food deliveries worth P7,000 have reached Jewel Taculod, the daughter of the senior pastor, and her family.

Taculod is now appealing to the public to stop sharing her address, as their family is in no way connected to the Ateneo student.

“The address posted in the comment section…is not legitimately his! Please be responsible [with the] posts you’re sharing!  May pamilya kayong naapektuhan, na walang kamalay-malay sa issue (You’re affecting a family that is not involved in the issue whatsoever)!” she said on Facebook.

There were also pending orders worth P37,000 and P17,000 sent to the address through online shopping site Lazada. According to Taculod, they were not approved for delivery since calls for confirmation went unanswered. She later pleaded with Lazada to block all deliveries sent to their address under the name of the bully.

Aside from the deliveries, they’ve noticed more people passing by their place.

“Maraming dumadaan sa amin. Kaya nagpost kami ng papel,” Taculod said. (A lot of people pass by our home. So we posted a piece of paper.)

On that piece of paper, they wrote:

“This is NOT the house of [the bully] or their family. Any delivery in that name, please return to sender. You are a victim of FAKE NEWS. – the real owners”

(This is the first time this has happened to us – we can’t sleep because something unexpected might arrive. We are feeling unsafe now because our address is being spread on social media.)

Taculod’s family also called for prayers for all victims of bullying. (READ: What you can do if your child is being bullied)

Ateneo has announced that it dismissed the student caught bullying his peers. – Rappler.com