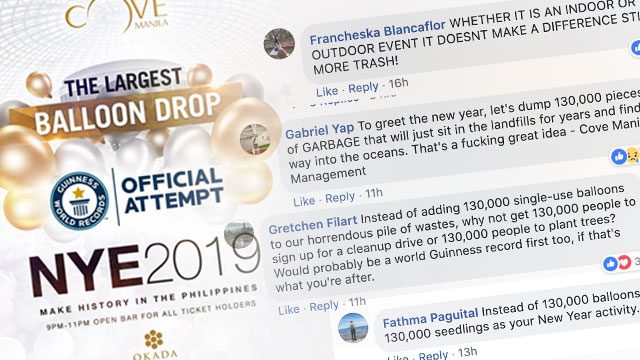 MANILA, Philippines – Irate netizens and environmental groups voiced their criticism on social media over Cove Manila’s attempt to land in the Guiness World Records with the largest balloon drop during its New Year’s eve countdown.

As of posting, Cove Manila’s announcement has garnered some 17,000 reactions, mostly disapproving of the event.

Cove Manila said in a Facebook post that the event is “not a whimsical effort to just ‘play’ with thousands of balloons” but an effort to make a new world record for the country and demonstrate fun in a responsible way.

“Firstly, the balloons are biodegradable. Secondly, the balloon drop has been planned with solid environmental management protocols in place to minimize, if not eliminate, any possible impact on the environment. And thirdly, we are recycling all the balloons and creatively turning them into something useful,” said Cove Manila in a post.

In a comment, Cove Manila also said that the balloon drop will happen in an enclosed space. They also assured netizens that the property consistently follows the local government unit’s waste disposal guidelines. These standards would be applied during the upcoming NYE2019 event.

But these assurances by Cove Manila did not stop individuals and groups in condemning the event.

The environment group The Climate Reality Project said that using plastic balloons is a wasteful act.

“Even if this will be done indoors, #DropBalloonDrop Cove Manila‘s balloon drop must be stopped. It is unsustainable, wasteful and ecologically apathetic. How about 130,000 rose petals or 130,000 leaves? Or growing 130,000 indigenous trees to offset your carbon emissions?,” said in a statement.

Climate Reality also tagged Guinness World Records to remind them that they must be consistent with their stand of  no longer recording environmental challenges.

According to the Guinness World Record website, record managers will no longer monitor actions that have detrimental impact on the environment.

“Record managers are sensitive to record attempts that prove detrimental to the environment. The record for the most kongming lanterns (sky lanterns) flown simultaneously, for example, was rested due to environmental concerns. The record was 15,185 and was achieved by the Middle Way Meditation Institute (Philippines) in Miago, Iloilo, Philippines on 24th May 2013,” as posted on Guinness World Record’s site.

Below are some netizens’ comments on the posts: