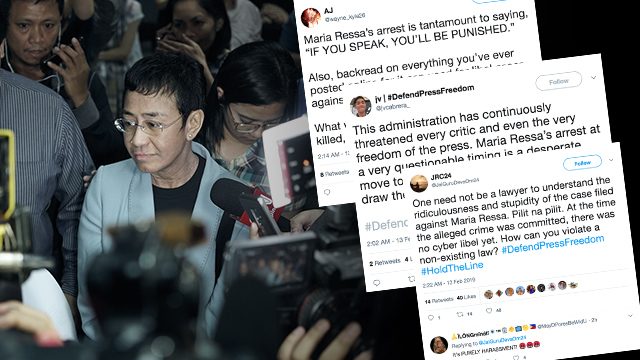 MANILA, Philippines – Intrigued by the timing of Maria Ressa’s arrest warrant, many netizens saw it as a desperate move to silence the press.

The arrest warrant was issued the day before by Presiding Judge Rainelda Estacio Montesa of the Manila Regional Trial Court Branch 46.

Many netizens on Wednesday pointed out the timing of the arrest warrant.

This administration has continuously threatened every critic and even the very freedom of the press. Maria Ressa’s arrest at a very questionable timing is a desperate move to silence us, but this is we where we draw the line. We need to fight back.#DefendPressFreedom

They arrested Maria Ressa late so that she can have a little amount of time to post bail.  https://t.co/qjJLOBIREj

The Department of Justice (DOJ) recommended the filing in court of cyber libel charges against Ressa and former Rappler researcher Reynaldo Santos Jr over a story published in May 2012 – or 4 months before the law that they allegedly violated was enacted. (READ: Despite NBI flip-flop, DOJ to indict Rappler for cyber libel)

Questioning the details of the case, many netizens went on to scrutinize how the article in question could even fall under the coverage of the Cybercrime Law when it was only enacted in September 2012. (READ: Rappler libel complaint dangerous for media, bloggers – cyber lawyer)

Ressa’s arrest triggered an outpouring of comments from netizens lambasting the move as an “intimidation tactic at work.”

Fearing its repercussions on journalists and other members of society, many netizens urged people to defend press freedom and hold the line.

Here’s what netizens had to say about the matter: