Filipina game changers share what it takes to be leaders in science, tech

Feb 25, 2019 3:00 PM PHT
Samantha Bagayas
Facebook Twitter Copy URL
Copied
Four women who have made a mark in science, technology, engineering, and math recount their journeys, as well as the challenges and opportunities that lie ahead 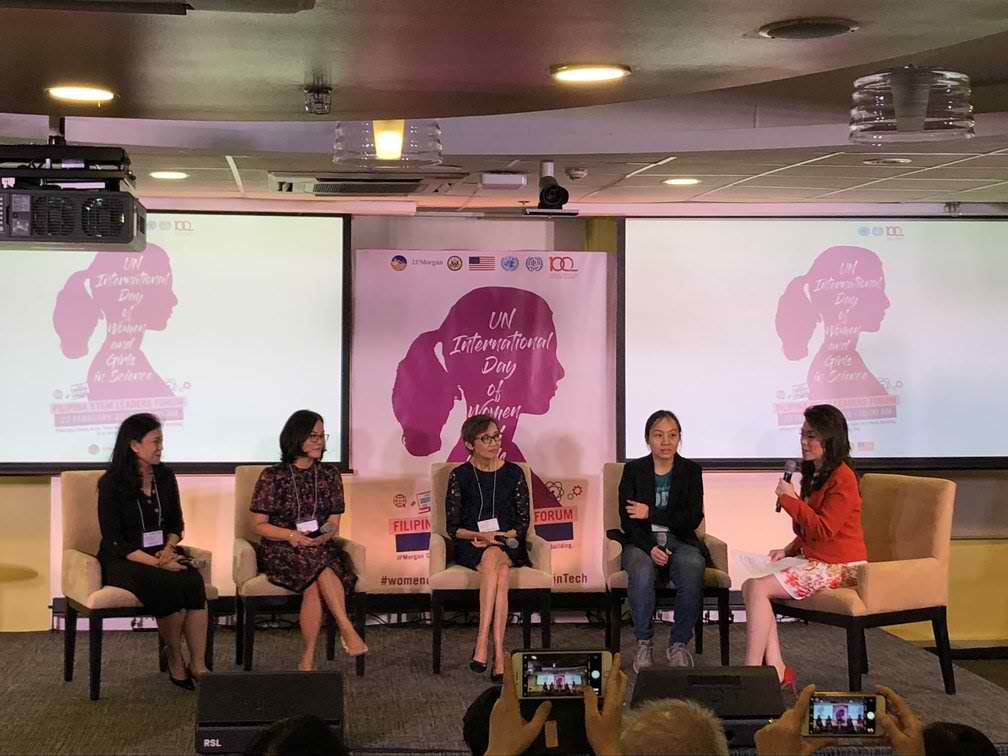 MANILA, Philippines – What does it take to be a woman in the fields of science, technology, engineering, and mathematics (STEM)?

To mark the United Nations International Day of Women and Girls in STEM, the International Labor Organization gathered 4 Filipina leaders on Friday, February 22, to share their remarkable journeys in paving the way for women in the Philippines.

Aileen Judan Jiao, the president and country general manager of IBM Philippines, is the first homegrown Filipina leader of the company. She started nearly 3 decades ago in the field of technology. That time, female leaders pioneering in STEM were sparse. She didn’t have a role model to inspire her to delve into the field.

“It was more for my longing. I grew up with 4 brothers and one sister and a very patriarchal family. I was very interested in the role that will make it in the future,” she said.

As computers started to gain traction, she chose to study computer science –gravitating away from more traditional courses that were expected of her such as commerce, accountancy, and medicine.

“I’ve always been fascinated by computers, so when I got exposed to them at a young age, I really wanted to know how to master and operate computers,” Tierro shared.

“I love coding. I love the attention to detail – every period, every comma can make a difference between success and failure…. I also liked that there are many ways to solve a problem. You can code things differently, and get the same outcome,” she added.

Similarly, Maria Cristina Coronel, the president and chief executive officer of Pointwest Technologies, has been fascinated with how things are created and manufactured since childhood. She chose to study chemical engineering.

Yet 45 years ago, even with a track record of consistently topping her classes, her dreams were dashed, as she was told that companies “don’t hire female chemical engineers.”

Faced with that particular situation, she decided to become a programmer trainee at a time when computers were not yet popular.

“My motto is there’s always a better way of doing things. I guess that’s the platform. That’s basically where technology is most of the time. We get to improve stuff whether it’s in technical processes or in application systems,” Coronel said.

Meanwhile, Michie Ang, the founding director of Women Who Code, graduated with a degree in nursing.

She only started to seriously consider pursuing a career in technology when her friend invited her to make an application. Initially, she didn’t even know what an app was since smartphones were still being introduced in the Philippines then.

Still, she took the challenge, started reading, and explored how to build an app.

That kick-started her whole journey, prompting her to participate in different events in the Philippines to understand its communities in tech. “[The opportunity] just stumbled in front of me,” Ang said.

Aside from few job opportunities for women in STEM, there are also other unique challenges that they face in the field. These may include hesitance to take charge, negotiate salaries or days off, and push for their ideas.

Women Who Code, especially, is focused on improving not just technical skills but also soft skills such as public speaking, leadership, and negotiating skills, to help women advance in their careers.

“Technology changes so fast, and we have to learn new things. You have to add in those soft skills,” Ang said.

Jiao also pointed out how piquing women’s interest in STEM is not the problem, but sustaining them in the workforce.

For instance, some women leave their careers when companies are inflexible about the demands of marriage or motherhood.

“I think there’s still that feeling that…if you’re more of a manager, you are less of a mother, although we have to change that mindset,” Coronel said.

Tierro shared that this could be solved by establishing a comprehensive action plan that can offer flexible work arrangements as well as maternity and paternity leaves, similar to what Accenture did even before the Expanded Maternity Leave Act was signed.

“It’s really more about the work-life [balance], the integration, and seeing it’s okay to have these different roles where there are very technical professions,” said Jiao.

Having empowering role models in STEM can also draw more people in.

“I’ve experienced firsthand when I was starting to get exposed to international assignments, the lack of women [at] the table. It can be very discouraging…. Like when you go to conferences, and you’re the only Asian woman, you’re afraid to talk. You’re even afraid to raise your hand,” Tierro said.

She stressed how seeing more prominent women can build confidence.

“Varied kinds of role models who help women see themselves and reflect, ‘I can be like that,'” she added.

Women Who Code also holds events in partnership with other companies to champion the capabilities and skills of women in tech.

“As a community, we influence this company to change their mindset that women can actually do it too. By doing all of these events, by doing all this community work, we kind of like shift something in them,” Ang said.

To encourage more women to pursue careers in STEM, Coronel shared how collaboration between the academe, the public sector, and the industry is very crucial in providing opportunities.

Jiao also said that STEM teaching in school as well as exposure to workplace learning at a young age can help pique children’s interest in science and technology.

“The spark is important, the interest at that early age forms their focus,” added Tierro.

People can also take STEM courses online for free, get certification for online jobs, or work freelance or part-time to earn money.

“This is how technology also helps because we talk about digital fluency as an equalizer. It’s a powerful equalizer because a lot of the training is now available online,” said Tierro. – Rappler.com