Jun 22, 2019 9:49 PM PHT
Rappler.com
Facebook Twitter Copy URL
Copied
Youth groups urge the Duterte administration to conduct a course of action that would give justice to the Filipino fishermen who were victimized at the hands of the Chinese 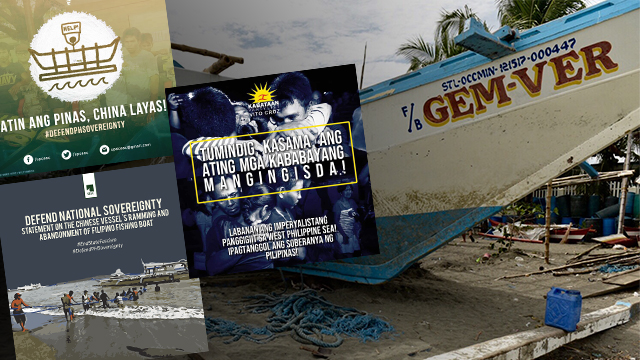 On June 9, a Chinese vessel sank the Philippine fishing boat in a collision in the West Philippine Sea that left 22 Filipinos on board “at the mercy of the elements.”

Echoing the Chinese foreign ministry, President Rodrigo Duterte downplayed the sinking of the boat as a “maritime incident.” The statement was made 6 days after Defense Secretary Delfin Lorenzana exposed the incident on Independence Day, June 12. (READ: TIMELINE: Sinking of Filipino boat in West PH Sea by Chinese ship)

League of Filipino Students (LFS) described Duterte’s response as a betrayal to the Filipino people and condemned the dismissal of “outright harassment and plunder of China against ordinary Filipino fisherfolk.” (WATCH: Boat sinking at Recto Bank from indignation to dismissal)

“Duterte’s inactions and deliberate disregard on the welfare of our Filipino fishermen is a display of his cowardice to foreign plunderers. His nerve to paint this gruesome incident as a ‘simple maritime incident’ reeks of betrayal to the people who have been genuinely defending our territorial waters and natural resources,” LFS national spokesperson Kara Taggaoa said.

Kabataan Partylist Vito Cruz pointed out that the sinking of the Philippine fishing boat in West Philippine Sea is not the first time that China has clashed with Filipino fishermen. In 2018, videos show that the China Coast Guard has been habitually taking the catch of Filipino fishermen in Panatag (Scarborough) Shoal off the coast of Zambales province.

Cruz asserted that the administration’s neutral response to incidents of harassment by China in Philippine territory shows that the government gives precedence to China over the Filipino people.

(Being neutral in the face of continuing violations of human rights of Filipino fishermen and the decision of the international court is siding with oppressive China.)

University of the Philippines School of Economics Student Council said that China’s abandonment of the Filipino fishermen proves that territorial disputes over the West Philippine Sea have not ended, even after the Philippines won the case in 2016, nullifying China’s claim.

It urged the government to seek accountability from the Chinese that were aboard the vessel.

“We demand for the Philippine government to serve at the best interest of its own people…It is high time that we reevaluate our diplomatic relations with the Chinese government, especially after several bouts,” it asserted in its statement.

The UP College of Education Student Council likewise called on the Duterte administration to conduct a course of action that would give justice to Filipino fishermen who were victimized at the hands of the Chinese. (READ: Owner of sunken boat: I feel like we’re slaves of China)

In UP Visayas, the College of Arts and Sciences Student Council slammed the “subservience of the Duterte regime to the imperialist Chinese.” The statement also slammed the administration’s “anti-Filipino” policies, such as the TRAIN Law, and the War on Drugs.

The College of Fisheries and Ocean Sciences Student Council echoed their statements, and added that fishermen are one of the poorest sectors in the country and are deserving of the administration’s support.

(Our fishermen are among the poorest sectors in the country, which makes them easy to oppress and silence. What the 22 Filipino fishermen need from their government now is justice, the necessary material assistance, and protection from oppressive foreigners.)

Youth groups were not alone in calling out the government. The Iloilo chapter of the All UP Employees Union, condemned the Duterte government for disregarding the interests of the fisheries sector, and urged the UP Visayas community to take action regarding the incident.

“Since the College of Fisheries and Ocean Sciences (CFOS) is our flagship college, U.P. Visayas cannot be silent on this issue that directly affects the fisheries sector. The main reason for the existence of CFOS is precisely to address the lot of the poorest sector – the Filipino fishers,” the union said. – Rappler.com