‘This is not the last’: Thousands unite for People’s SONA 2019

Jul 22, 2019 11:47 PM PHT
Samantha Bagayas
Facebook Twitter Copy URL
Copied
Around 5,350 protesters march along Commonwealth Avenue to share their own version of the state of the nation 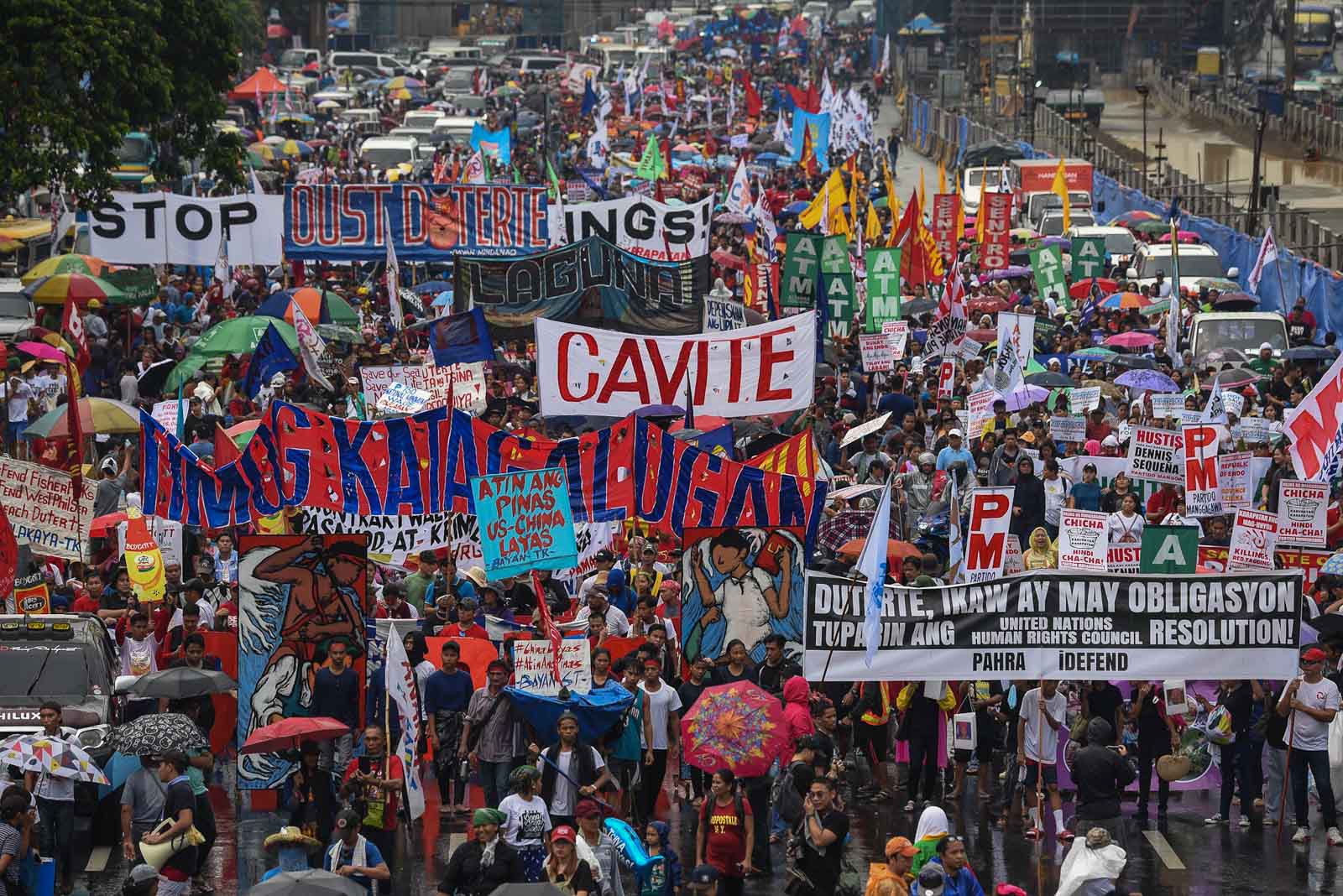 MANILA, Philippines – On the day of President Rodrigo Duterte’s 4th State of the Nation Address (SONA), thousands of Filipinos took to the streets to share their own version of the state of the nation.

According to police estimates, around 5,350 protesters who were undeterred by the rain marched along Commonwealth Avenue for the United People’s SONA past 3 pm Monday, July 22.

The United People’s SONA was pushed forward by a broad coalition of opposition personalities and sectoral groups in a bid to highlight the country’s struggle for sovereignty, democracy, and livelihood. (READ: IN PHOTOS: From Luzon to Mindanao, thousands cry ‘Atin ang Pinas!’)

Among the popular personalities present during the rally was former chief justice Maria Lourdes Sereno, who urged Filipinos to look at the nation’s future and see what could be done to stop the government’s wrongdoings.

“Ano ang magagawa natin upang ibangon ang demokrasya at paano ipaglaban ang kinabukasan ng mga batang Pilipino? Hindi po ito ang kahulian. Magsasama pa po tayo (What can we do to champion democracy and fight for the future of Filipino children? This is not the last. We will still be together),” she said. 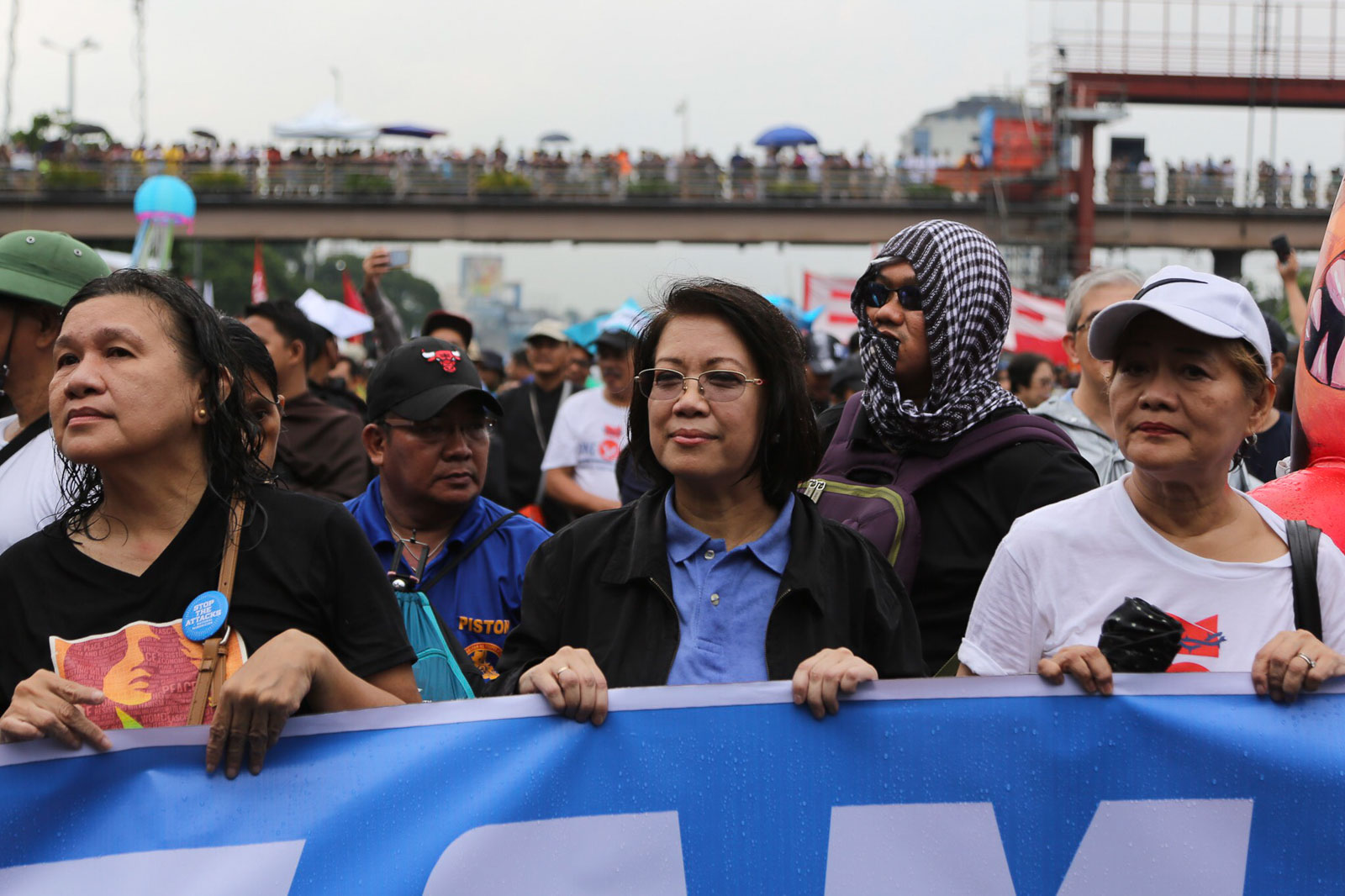 This is the second time in a row that groups staged the United People’s SONA to show the state of the nation from the perspective of the Filipinos.

Aside from tackling issues under the Duterte administration, this year’s march focused on defending the Philippines’ sovereign rights over the West Philippine Sea.

This comes in the aftermath of the sinking of a Filipino fishing boat by a Chinese vessel, which the administration dismissed as a mere “maritime incident.”

Makabayan’s Neri Colmenares hit the close ties between Duterte and China, pointing out the exploitation of the Philippines’ resources and fishermen in the West Philippine Sea.

He dismissed Duterte’s claim that talking back to China could mean war, saying that other countries like Vietnam have spoken up about China’s exploitation of their waters.

(We won in the international tribunal, yet we bow down to China. That’s Duterte’s betrayal. We won but somehow we’re the bigger losers.) 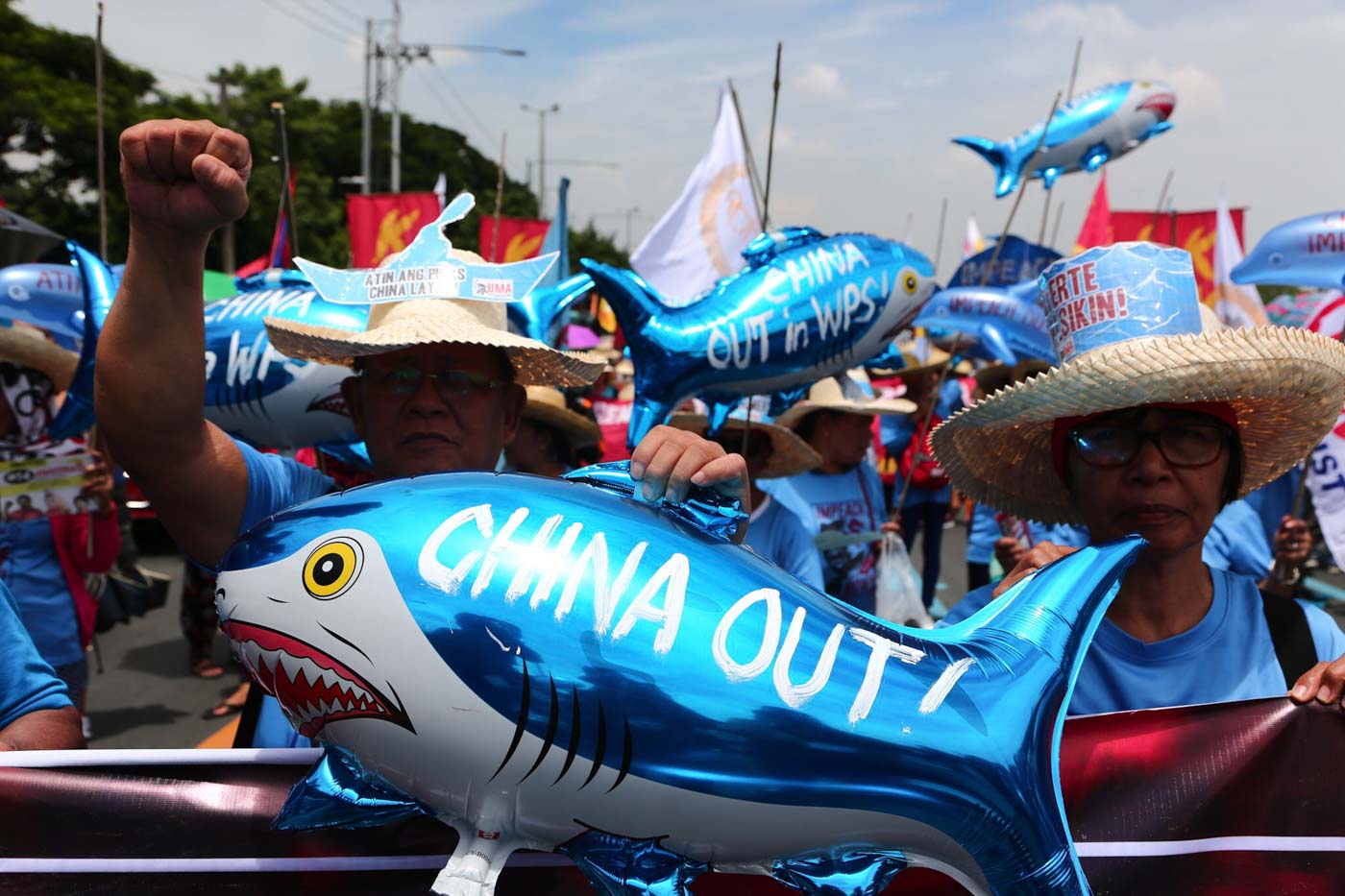 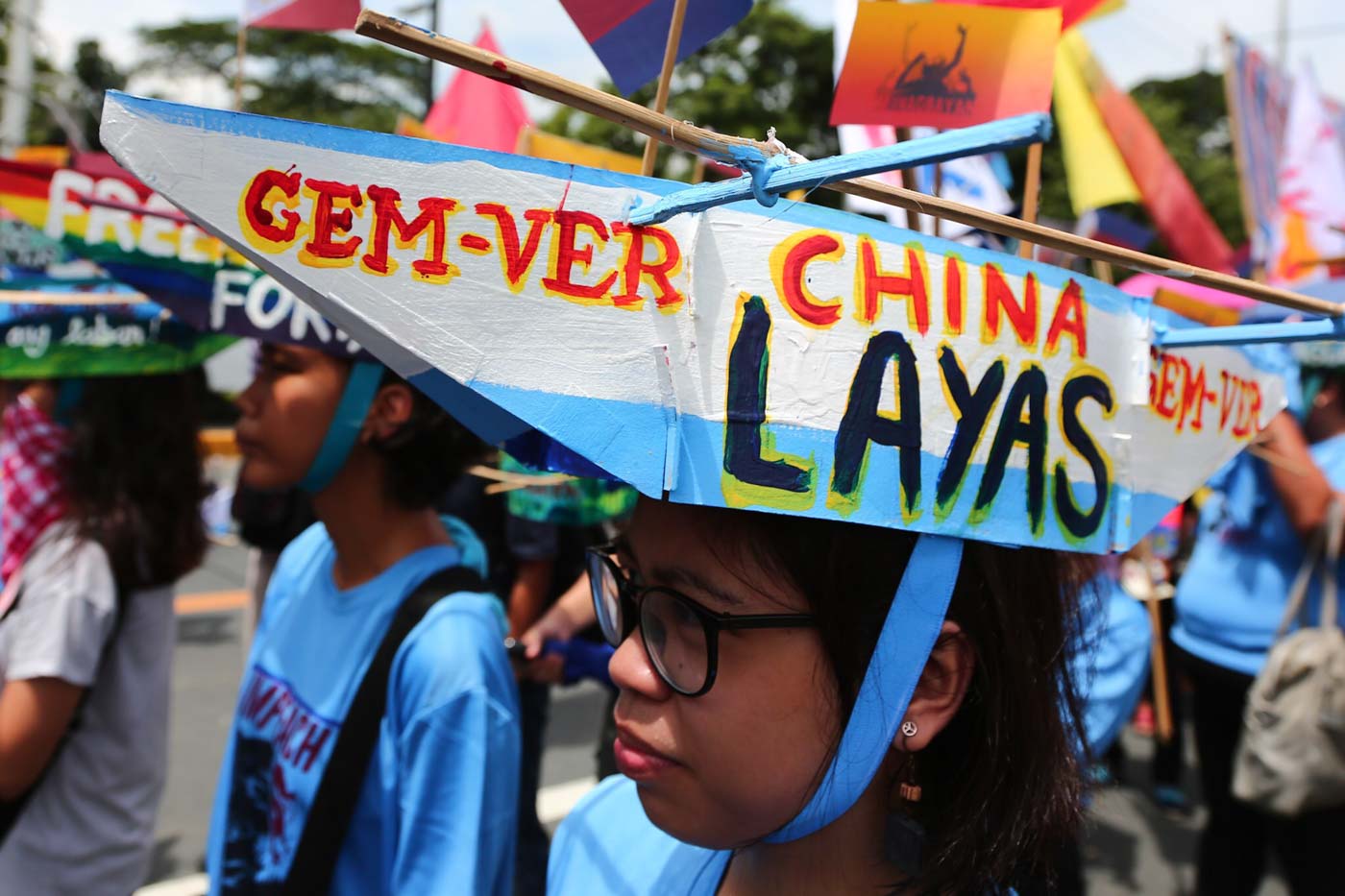 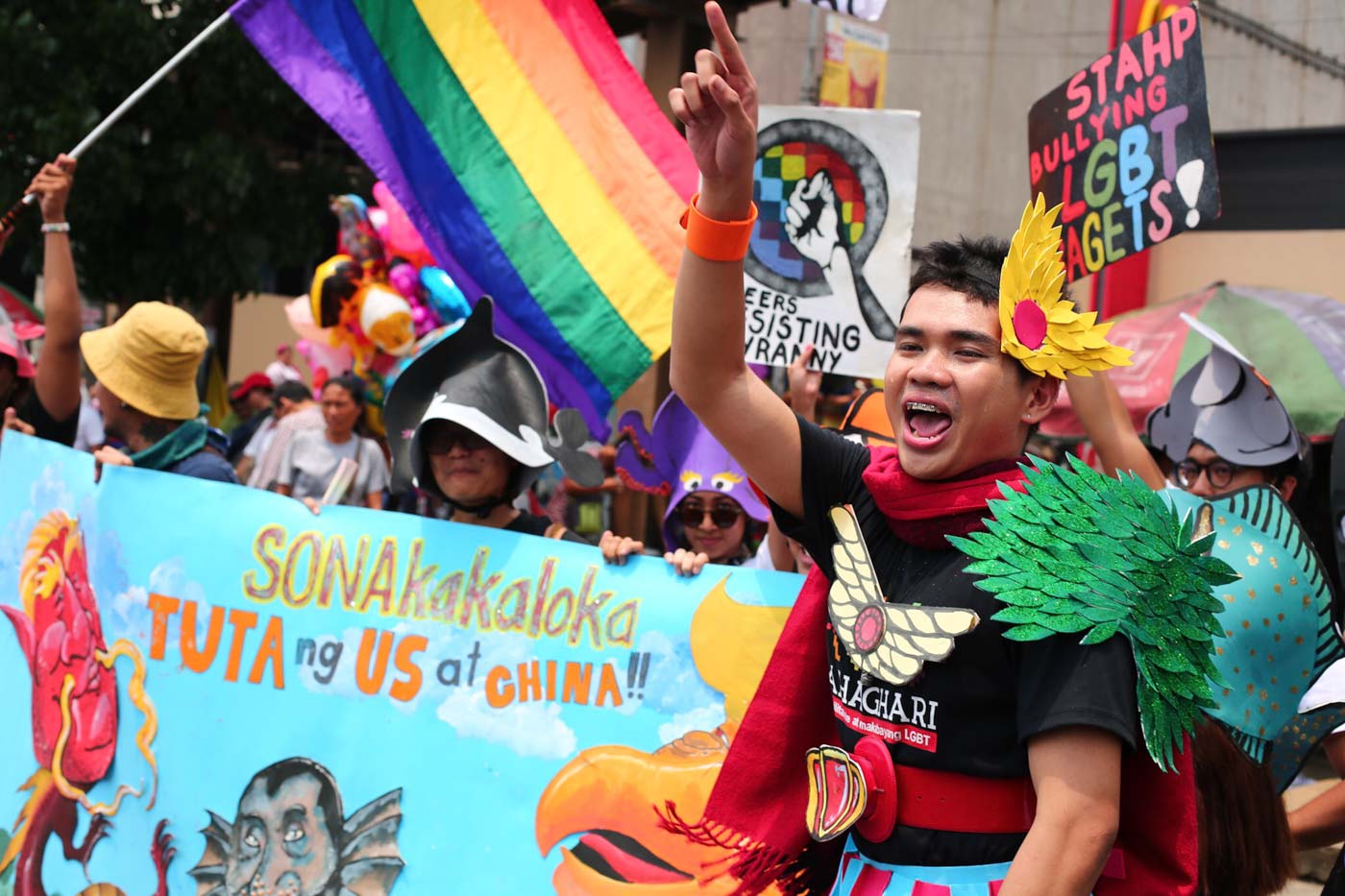 Chel Diokno and Leody de Guzman were also present during the rally.

Diokno echoed Colmenares’ call, saying the huge attendance on Monday shows that there will always be Filipinos ready to defend the rights of the country and its people.

(You can rest assured that we’ll be together in this fight and we won’t stop until justice, truth, and dignity prevail again in our country.)

During the United People’s SONA, protesters burned a Duterte effigy bearing a likeness to a “syokoy” (merman). The effigy represents Duterte selling out the West Philippine Sea to China. 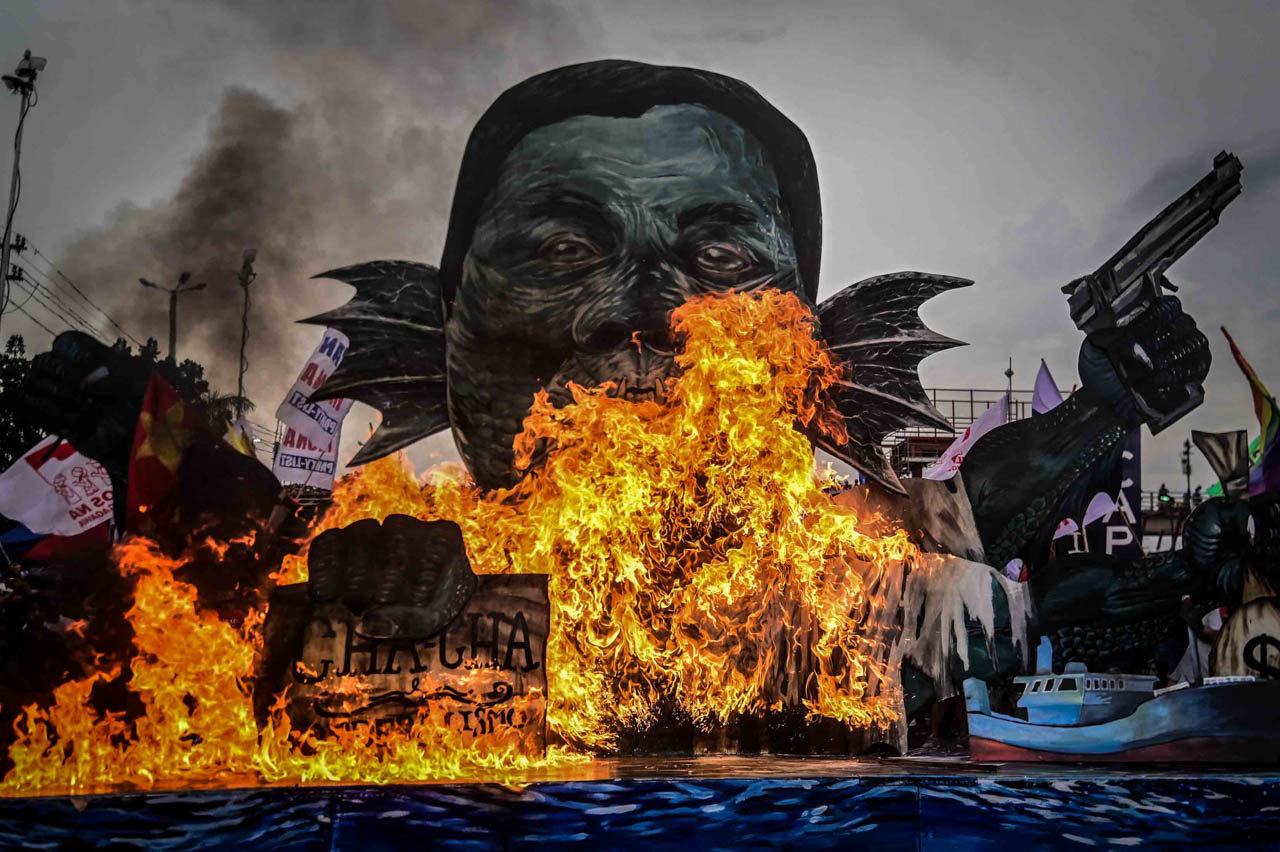 Other issues were also raised during the United People’s SONA, such as attacks against human rights, extrajudicial killings, and the impact of the government’s economic policies.

He denounced the current form of the security of tenure bill, saying the anti-endo measure hardly solves the issue of contractualization in the country.

Labor groups and business chambers alike disagree with the bill, with workers saying it fails to address key issues such as the end-of-contract or endo scheme.

Before marching for the United People’s SONA, labor groups gathered for their own United Workers’ SONA to shed light on unresolved workers’ demands.

He said the existence of protests by labor workers from companies such as Sumifru, NutriAsia, and Zagu shows that the government doesn’t prioritize the labor sector.

Rappler takes a deeper look at the first half of Rodrigo Duterte’s presidency – its highs and lows, its achievements and shortcomings: Duterte Year 3: The Halfway Mark