#ProclaimTheRealVP: Netizens weigh in on Marcos vs Robredo poll protest 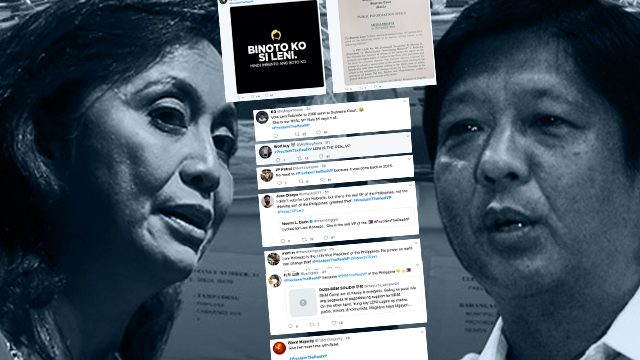 MANILA, Philippines – The hashtag #ProclaimTheRealVP trended on Twitter on Tuesday, October 15, as netizens took to social media to rally behind their 2016 vice presidential bet.

This happened shortly after the Supreme Court (SC), acting as the Presidential Electoral Tribunal (PET), did not rule on the protest filed by former senator Ferdinand Marcos Jr against Vice President Leni Robredo after several weeks of postponement. (READ: Supreme Court to release initial recount results in VP protest)

Instead, the PET ordered the release of the recount results in the 3 pilot provinces and ask for both parties for their comment. The Court also asked them to submit memoranda in 20 days on Marcos’ motion to nullify the results in 3 other provinces, in Muslim Mindanao.  (READ: CHEAT SHEET: The Marcos vs Robredo electoral protest)

While some of them picketed the SC, supporters of Robredo and Marcos also showed their support online as they tried to answer the one question hounding the electoral protest: which of the two is the “real” vice president?

As #ProclaimTheRealVP trended on Twitter, some netizens questioned the need for yet another “proclamation” when the rightful vice president, they believe, was already proclaimed 3 years ago.

No need to #ProclaimTheRealVP because it was done back in 2016.

Many netizens shared this sentiment and slammed Marcos supporters for “twisting” the circumstances to favor their narrative.

Proclaimed in 2016 – Curated tweets by rapplerdotcom

So bale, may proclamation ulit for VP Leni?#ProclaimTheRealVP

Twitter user @lem0nade_02 asserted that he cast his vote for Robredo, and any allegations of cheating invalidate legitimate votes like his.

I can still remember that day, when I casted my vote for VP Robredo, yes I am one of them… And I still support her. #ProclaimTheRealVP

Leni Robredo is the polar opposite of BB Marcos.

I voted for her, b/c

1. She'd make a great Mother of the Nation—gentle & kind, but tough & fearless, when she needs to be.

(The elections are over…. Congress proclaimed us, we won. There was a recount, we won again. So how many times do I have to win for him to accept defeat?)

Marcos’ supporters expressed their optimism that their bet would finally be proclaimed as the “real” vice president of the Philippines.

So, I really hope, Bongbong Marcos will be proclaimed as the Real Vice President of the Republic of Philippines. #ProclaimTheRealVP

BBM The real vice President of the Philippines. #ProclaimTheRealVP #BBMTheRealVP

I will always support the true Filipino lover @bongbongmarcos #ProclaimTheRealVP

Some netizens remained firm that the 2016 vice presidential election results were anomalous. Twitter user @JoyyyV questioned why Marcos, who was at one point leading the polls by over a million, still lost to Robredo.

One Twitter user even bid goodbye to Robredo, whom they dubbed “fake VP.”

Marcos expressed his “frustration” over the PET resolution, but looked at the ruling as “a chance to continue” in his quest. (READ: Who won this round? Marcos calls latest PET action ‘good result’)

“What has happened in the last 3 years, what happened today, is the case goes on and we will go from strength to strength…. Asahan ninyo na ito ngang ipinaglaban ninyo at ipinaglalaban natin ay ipagpapatuloy natin, at binibigyan tayo ng PET ng pagkakataon na ipagpatuloy ang laban natin,” he told his supporters.

(You can trust that I shall continue fighting our battle because the PET gave us another chance to continue this.)

Here’s how others weighed in on the poll protest:

So who has the rightful claim to the vice presidential seat? The deliberations on the case will resume on November 4, but until then, Filipinos will have to leave it up to the courts to decide the final answer. – Rappler.com