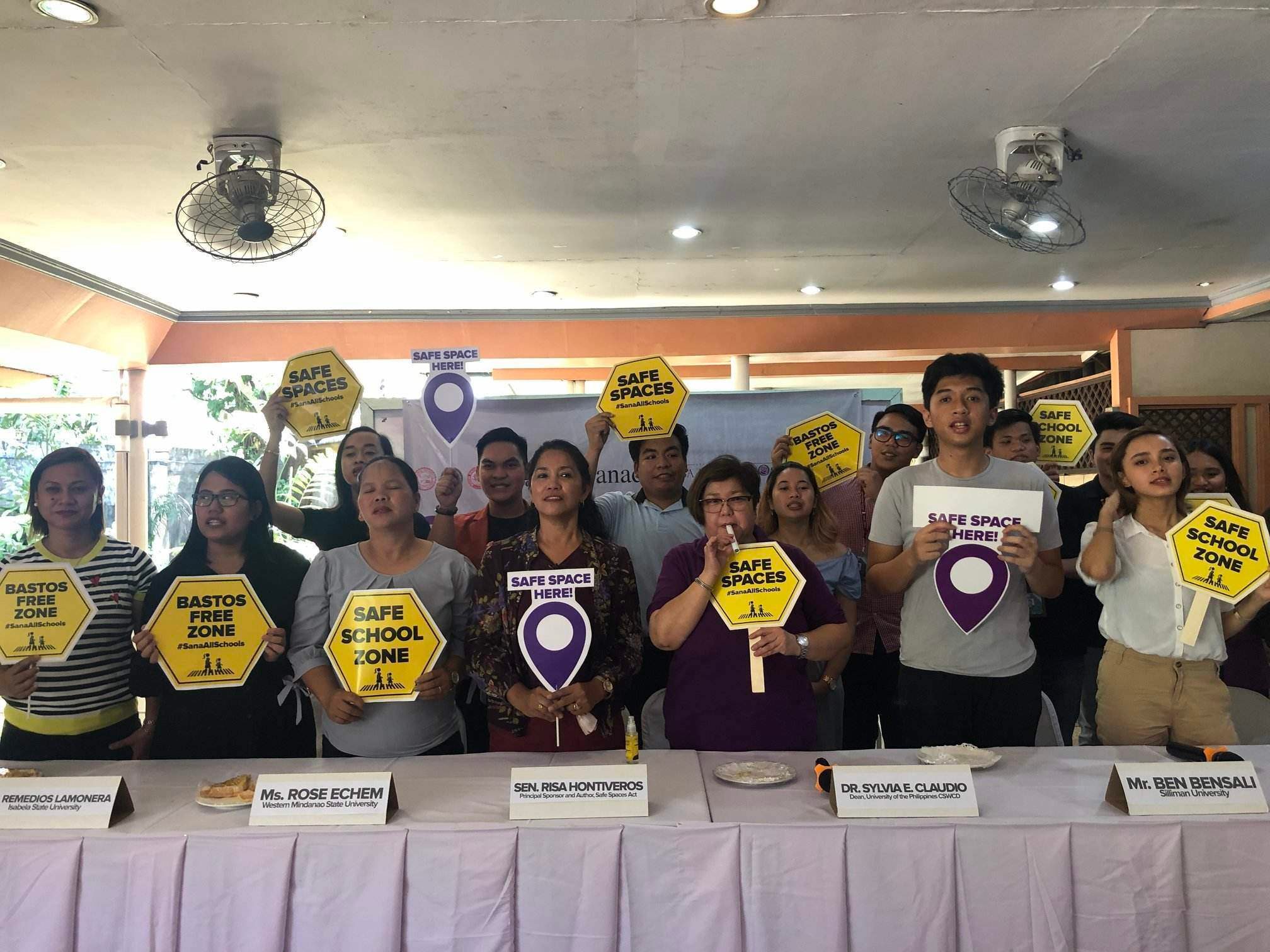 MANILA, Philippines– When students experience sexual harassment on campus, what happens next?

For some, these instances go unreported due to a lack of avenues for victims to forward their concerns.

Hoping to fix this, several school administrators and student leaders on Monday, March 9, called for the establishment of “safe space desks” on campuses all over the Philippines, where victims could report their experiences for immediate and appropriate action.

In a press conference, the group urged schools to comply with the Safe Spaces Act, which seeks to protect everyone from sexual harassment both in physical and online spaces. (READ: FAST FACTS: How does the Safe Spaces Act protect you?)

Enacted in April 2019, the law states among its implementing rules and regulations (IRR) the provision of avenues for redress in case of sexual harassment on campus.

It also says that academic and training institutions must “adopt and publish grievance procedures to facilitate the filing of complaints by students, staff, and faculty members” within 150 days since the rules’ implementation in October 2019. That means the period is slated to end late March 2020.

Acting on sexual harassment on campus

“Before this current school year, there have been no tangible ways for students to come forward when they’ve been harassed by students, teachers, or members of the Silliman community…This means it takes a lot of courage for you to speak up and call out people who have violated you,” shared Ben Bensali of the Silliman University Student Government.

Through its students’ rights and welfare committee, the Silliman University Student Government released an online website in late 2019 named the Grievance Toolkit, where students can report different cases of harassment from faculty, administration, and fellow students.

“Before, there have been literally no cases that have been processed in the university. By this year, we have processed 9 cases. While this might seem like a small number, we think this is a step in the right direction for Silliman University,” said Bensali.

A need for stronger procedures

“It wasn’t common to speak up about it because it was so stigmatized; that’s why there are no systems in place,” Isabelo said.

In late 2019, a student came forward with allegations that a respected instructor from Ateneo de Manila University touched him inappropriately and threatened to fail him after. The allegations, documented in a Facebook post, quickly made rounds online, sparking an uproar from the Ateneo community.

It wasn’t the first time a sexual harassment case became viral within the community. In 2018, the ADMU student council filed a case with the university against a longtime male professor after a post in Facebook group “ADMU Freedom Wall” drew attention to the professor’s alleged sexual harassment.

Despite the allegations, the ADMU administration said in an October 2019 memo that it has not received formal complaints against the two professors.

“This was often described as an open secret. This is exactly what makes sexual harassment so pervasive. It’s so commonplace, so normalized, that it’s hard to tell whether an act of harassment was indeed wrong,” said Senator Risa Hontiveros.

“Several students have said that social media has become their last resort, especially when the university that is meant to protect them does not act on their complaints right away, or worse, doesn’t take their complaints seriously,” said Hontiveros.

The Loyola Schools Gender Hub, made accessible to students starting last year, hopes to provide checks and balances within the university towards a “gender-safe Ateneo.”

However, not all schools have a gender hub or an avenue to file their complaints despite the implementation of the Safe Spaces Act.

Sylvia Claudio, dean of the University of the Philippines College of Social Work and Community Development, added that schools have a responsibility to keep their campuses safe from harm and violence.

“It is the central and most important role of the university to produce scholars, and sexual harassment stands in the way of that mission,” she said.

As the 150-day period nears, Hontiveros called on academic institutions to set up procedures addressing sexual harassment, as well as avenues on campus where people can safely report their complaints without fear of being judged, discriminated against, or failing their classes.

“That’s why I want to call on all education institutions to implement their obligations under the Safe Spaces Act. You’re mandated to educate your students about sexual harassment…Our schools are often called our second homes, and so our students, especially our women and girls including LGBTQ+, need to feel it is home, comfortable, secure, and safe,” she said.

“Your institution has the power to set the culture. For so long, we’ve enabled a culture that allows unequal power relations to be the cause and the consequence of sexual harassment,” Hontiveros added.

Isabelo highlighted that the fight against sexual harassment can start by addressing the problems in our immediate communities.

For Bensali, these safe spaces aren’t a choice but a necessity.

“We think that these safe spaces are environments that every campus needs. This is a standard that universities should hold themselves to. It’s not an added feature that they should have. We think this is necessary for any university to further progress,” he said. – Rappler.com