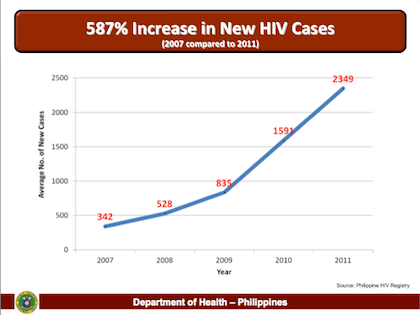 MANILA, Philippines – “There has been a 587% increase in the number of new cases of HIV in the Philippines from 2007 to 2011. This is simply unacceptable. The DOH (Department of Health) has not seen an epidemic rise this quickly,” Dr Genesis Samonte, chief of the HIV Surveillance Unit of the National Epidemiology Center (DOH-NEC), said Thursday, May 24.

Legislators are calling for an amendment of RA 8504 or “The Philippine AIDS Prevention and Control Act” to better address this rapidly worsening HIV crisis in the Philippines. The problem is further compounded by the stigma and discrimination experienced by people living with HIV or the human immunodeficiency virus (PLHIV).

The 2010 Global AIDS Report done by UNAIDS showed that there are only 7 remaining countries where HIV has increased by over 25%. The Philippines is one of those 7 countries.

The Philippines remains to be classified as a low-prevalence country for HIV, with less than 1% of its general population affected with the virus. However, Samonte stressed, “HIV is a concreted epidemic with more than 5% of its most-at-risk populations (MARPs) infected with HIV.”

Among MARPs, reported HIV incidence is 6% among men who have sex with men (MSM), 5% among female sex workers, and 53% among people who inject drugs.

The spikes are particularly high in Metro Davao, Metro Cebu, and Metro Manila. NCR accounts for 47% of newly diagnosed HIV individuals as of March 2012.

The DOH projects the actual number of HIV cases to be at 19,335. “There are still many people who don’t get tested and do not know their status,” said Samonte.

Congresswoman Janette Garin said that this is one of the reasons why RA 8504 needs to be amended.

Garin is one of the champions of House Bill 5312 or the National Comprehensive HIV and AIDS Prevention, Treatment, Care and Support Policy and Plan” to amend RA 8504.

“RA 8504 was enacted when there was only one new infection every 4 days. Today, as recorded in the March 2012 AIDS Registry, we are already looking at one new infection every two hours. The epidemic profile has changed over the years, hence, a stronger, more effective mechanism and structure for HIV and AIDS related violations must be put in place,” said Garin. Garin called for the strengthening of the stigma reduction mechanisms of the law and the establishment of local AIDS councils in every province. “People don’t know their status because they are scared to get tested. Sometimes, they don’t know where to go [to get help or get tested].”

Garin also called for the institutionalization of a funding framework for HIV in light of the Global Fund’s grant to the Philippines ending in November 30, 2012.

The Philippine AIDS Registry estimates that there are about 2,300 PLHIVs in the Philippines who receive their ant-retroviral therapy (ARV) medication free from the proceeds of the Global Fund.

“The DOH has anticipated the pullout of Global Fund support and has already procured enough supplies of ARV for 2013 for the current number of enrollees plus a projected increase. But the problem is the year after that. We are dependent on what Congress with approve for the succeeding year,” said Samonte.

According to Samonte, the DOH needs about P400-M for an HIV budget alone. Currently, the budget is P200 million.

“In the face of the expanding epidemic, we need a road map for a comprehensive response to the issue. I call on Congress to enact the HB 5312,” said Rom Dongeto, executive director of the Philippine Legislators’ Committee on Population and Development (PLCPD). – Rappler.com